T-cell acute lymphoblastic leukemia (T-ALL) affects about 15% of pediatric patients and 25% of adult patients of total ALL cases. It is an aggressive tumor characterized by the accumulation of multiple genomic mutations and chromosomal aberrations, such as frequently chromosomal translocations, that bring to the formation of many in-frame fusion genes encoding the respective chimeric and oncogenic proteins (Atak et al., 2013). Among all these chromosomal aberrations it was found also the fusion gene 5 EEF1G / 3 OOEP deriving by the genomic translocation and fusion of a part of OOEP gene, situated on chromosome 6, with a portion of EEF1G gene, instead located on chromosome 11. This leads to the know but not still well-characterized translocation t(6;11)(q13;q12) EEF1G/OOEP.

There is no evidence of impact of the EEF1G/OOEP fusion gene on the tumor behavior and also its contribute in the prognosis of acute lymphoblastic leukemia/lymphoblastic lymphoma is still unknown.

Gene name
EEF1G
Location
11q12.3
Note
Alias: Eukaryotic translation elongation factor 1 gamma, EF1G, GIG35, PRO1608, EEF1γ, EEF1Bγ, EEF-1B Gamma, EF-1-Gamma, Elongation Factor 1-Gamma, Translation Elongation Factor EEF-1 Gamma Chain, Pancreatic Tumor-Related Protein
Eukaryotic translation elongation factor 1 gamma is a protein that plays a main function in the elongation step of translation process but also covers numerous moonlighting roles. It is expressed ubiquitously in human tissues and often it is found over-expressed in human cancer samples and cancer cell lines.
Dna rna description
EEF1G (Eukaryotic Translation Elongation Factor 1 Gamma) is a protein coding gene with 10 exons and a length of 14388 bp (RefSeq NC_000011.10). Its transcript is 1446 bp long (RefSeq NM_001404.5) but was observed five splice variants and nine pseudogenes probably originated by retrotransposition.
Protein description
eEF1G is formed by 437 amino acids (RefSeq NP_001395.1), it has a molecular weight of 50.12 kDa and it is a multi-domain protein which consist of three main domains: from the amino to carboxyl half terminal there are a glutathione S-transferase (GST)-like N-terminus domain (NT-eEF1G), a glutathione S-transferase (GST)-like C-terminus domain (CT-eEF1G) and a conserved C-terminal domain (CD-eEF1G) (Achilonu et al.,2014).
eEF1G is a subunit of the eukaryotic elongation factor-1 complex named eEF1H that result by the aggregation of different proteins that play a central role in peptide elongation during eukaryotic protein biosynthesis. The physiological role of eEF1G is still not well defined, however eEF1G seems to be necessary for guarantee the stability to entire eEF1H complex and to stimulate the activity of the eEF1B2 subunit during the elongation step of translation (Mansilla et al., 2002). However, are known that it has multiple non-canonical roles (moonlighting roles) inside the cell such as the interaction with cytoskeleton and binding with various mRNA and several proteins, comprise membrane-bound receptors (Coumans et al., 2014; Corbi et al., 2010; Cho et al., 2003).
Gene name
OOEP
Location
6q13
Note
Alias: oocyte expressed protein, chromosome 6 open reading frame 156, C6orf156, FLOPED, KH homology domain-containing protein 2, KHDC2, oocyte- and embryo-specific protein 19, MOEP19.
Dna rna description
OOEP gene is composed by 3 exons (RefSeq NC_000006.12) and its transcript is 689 nt long (RefSeq NM_001080507).
Protein description
Oocyte expressed protein, alias OOEP, is a component of the subcortical maternal complex (SCMC) that plays its roles in oocytes and in early stages of embryogenesis (Bebbere et al., 2016). OOEP is formed by 149 amino acids (RefSeq NP_001073976) and it has a molecular weight of 17.17 kDa. There are known other two isoforms of OOEP but their roles are unclearly.

The result of chromosomal anomaly is the novel fusion gene 5 EEF1G / 3 OOEP. Atak and colleagues (Atak et al., 2013) found its DNA in T-cell acute lymphoblastic leukemia (T-ALL), but there are no data or evidence about its mRNA and its protein. So, in this review, with the use of various tools and software will be predicted the possible transcript and also the probable protein. However, the data collected are hypothesis and have to be experimental verified. 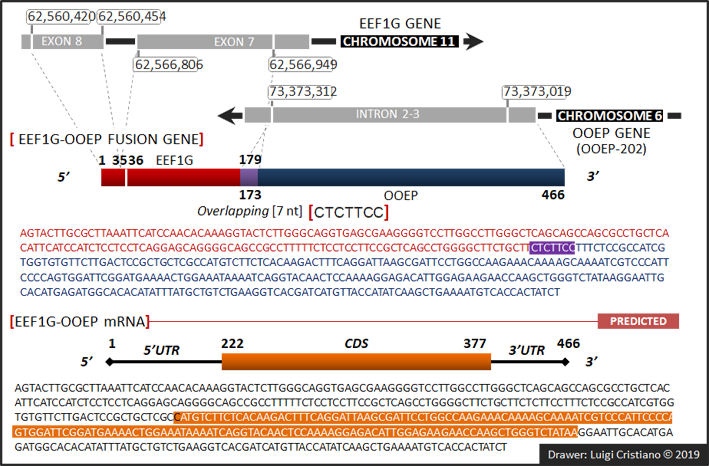 Figure 1. Schematic representation of the EEF1G gene, OOEP gene and the novel eEF1G-OOEP fusion gene. In the upper side of the picture there are the genomic sequence of EEF1G and OOEP genes, while in the middle side is reported the chimeric fusion gene 5EEF1G / 3OOEP. The genomic sequence for EEF1G/OOEP reported by Atak and colleagues (Atak et al., 2013) was analyzed with BlastN. The red portion is derived by EEF1G while the blue piece is derived by OOEP. Violet fraction is the overlapping between the two sequences. Finally, on the bottom side of the image there is the mRNA of EEF1G/OOEP with the predicted coding sequence (CDS) and UTRs (http://insilico.ehu.es/translate/index2.php).

The fusion gene 5 EEF1G / 3 OOEP was found in T-cell acute lymphoblastic leukemia (T-ALL) (Atak et al., 2013) and it derives by the genomic translocation t(6;11)(q13;q12) EEF1G/OOEP, i.e. by fusion of a part of OOEP gene, situated on chromosome 6, with a portion of EEF1G gene, instead located on chromosome 11. In particular, the fusion interests part of exon 8 and exon 7 of EEF1G that result fused with a portion of the second intron sequence, i.e. intron 2-3, of the OOEP-202, an alternative splicing form of OOEP that contains also the ribosomal protein L39 pseudogene 3, alias RPL39P3 (https://www.ensembl.org). By the analysis of the sequences reported in Ensembl appears that the portion of the OOEP gene that is fused with EEF1G is really a portion of RPL39P3 pseudogene.

There is no evidence about the mRNA of the EEF1G/OOEP fusion gene. However, with bioinformatic tools it is possible to predict its sequence and characterizing it. It seems to be formed by both the non-coding 5UTR and 3UTR and a coding sequence (CDS). The CDS is among 221 and 374 nt with a length of 154 nt and it is apparently protein-coding. It was chosen the longer codifying sequence of the 5->3 strand in that the sequence offers more reading possibilities (https://www.ncbi.nlm.nih.gov/orffinder/). 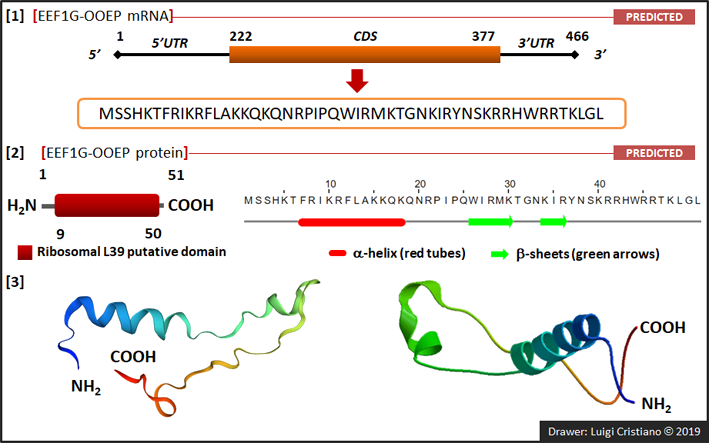 Figure.2 Schematic representation of protein produced by EEF1G/OOEP fusion gene. [1] In the upper side of the image there are both the structure of EEF1G/OOEP mRNA and the primary sequence of the translated protein (predicted); [2] in the middle side of the image are reported both the main domain of the protein which corresponds to ribosomal L39 protein (RPL39) putative domain and the predicted secondary structure (http://www.jalview.org); [3] the predicted tertiary structure for the protein, homologous to RPL39, is reported (https://swissmodel.expasy.org).

There is no evidence about the protein of the EEF1G/OOEP fusion gene. However, with INSILICO and ORFFINDER tools (http://insilico.ehu.es/translate/index2.php; https://www.ncbi.nlm.nih.gov/orffinder/) is possible to predict the protein sequence of the EEF1G/OOEP mRNA. The protein counts 51 amino acids with a molecular mass of 6,41 kDa and a theoretical pI of 12.55 (https://web.expasy.org/cgi-bin/protparam/ protparam). Surprisingly a perfect sequence homology with ribosomal L39 protein (RPL39) is noted by BlastP analysis and can be found the ribosomal L39 putative domain (https://blast.ncbi.nlm.nih.gov/Blast.cgi). The post-translational modifications are unknown.

There is no evidence not only of the protein but also of its localization. However, the predicted sub-cellular localization for the protein is cytoplasm (http://linux1.softberry.com/cgi-bin/programs/proloc/protcompan.pl).

It is unclear the role in oncogenesis of the translocation t(6;11)(q13;q12) EEF1G/OOEP and there is no evidence about its effective transcription and/or translation. Perhaps the EEF1G/OOEP fusion gene plays a regulatory role or it is instead effectively translated into a functional protein, that by bioinformatic analysis seems to be RPL39-like protein and that deriving from RPL39P3 pseudogene. It was demonstrated that RPL39 plays a role in metaplastic breast cancer where shows an oncogenic activity through the increase of the inducible nitric oxide synthase ( NOS2). Moreover, it was evidenced that a high RPL39 and iNOS expression are associated with a reduction in patient overall survival (Dave et al., 2017), so the abnormal translocation t(6;11)(q13;q12) EEF1G/OOEP could be linked with an increase of RPL39 levels in acute lymphoblastic leukemia/lymphoblastic lymphoma cancer cells by the translation of its pseudogene RPL39P3. In addition, some authors found high expression of RPL39P3 in human colon cancer LIM1863 cell line (Chen et al., 2016).
However, these are only hypothesis and the truly oncogenic potential of EEF1G/OOEP in proliferation and cancer aggressiveness needs to be better elucidated.