Characterised by families with cutaneous malignant melanoma (CMM) and nervous system tumours. Initially described in a family with malignant melanoma and\/or cerebral astrocytoma in eight members over three generations. Astroctytomas and cutaneous malignant melanoma have been identified in a number of well defined syndromes such as neurofibromatosis, Turcots, Lynch type II cancer, Li-Fraumeni and tuberous sclerosis. However, astrocytomas and CMM have been reported in families where the disease pattern does not fit the defined syndromes due to the absence of additional cancer types normally associated with these syndromes and mutations in genes known to predispose to these conditions (NF1, TP53, APC, MSH2 MLH1, TSC1, TSC2). In addition to astrocytoma, melanoma-astrocytoma syndrome families show other tumours such as medullablastomas, glioblastoma multiforme, ependymoma, glioma, meningioma, neuroblastomas, schwannoma and acoustic neurilemmoma. All these tumours are of neural crest, mesenchymal and\/or neuroepithelium origin. These families may\/may not show evidence of the dysplastic naevus syndrome (DNS) common in familial melanoma.

The neoplastic risk of melanoma-astocytoma syndrome has not been determined due to the small number of families identified. However penetrance appears consistent with that of melanoma in CDKN2A carriers. This was investigated in 2002 by the International Melanoma Genetics Consortium (GenoMEL) and is estimated to be 67% by 80 years of age.

Treatment consistent with that of familial melanoma patients   Yearly surveillance of patients and first and second degree relatives.

Melanoma has a good clinical outcome if identified at an early stage. Increasing thickness of tumour is associated with a rapid decline in life expectancy, highlighting the need for careful surveillance for precursor lesions. Prognosis of nervous system tumours is dependent on type, location and stage, however it is generally poor. Cancer Research UK reports a 5yr survival of between 10 and 15% for brain and central nervous system tumours since the mid-eighties.

To date all published families documented with melanoma-astrocytoma syndrome are linked to the CDKN2 locus on 9p21.

The CDKN2A gene showing the alternate exon usage and distinct splice products p16 and p14ARF. The asterisks indicate the stop codons for the two splice products. 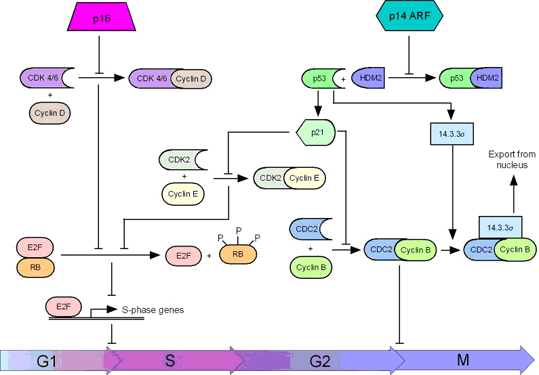 Functional significance of p16 and p14ARF in the cell cycle. P16 inhibits the G1 to S transition by inhibiting binding of Cyclin D to CDK4 and CDK6, in turn preventing phosphorylation of RB, release of E2F and transcription of S-phase genes. P14ARF inhibits both the G1 to S and G2 to M transitions by sequestering HDM2 preventing it from targeting p53 for ubiquitination. This stabilisation of p53 leads to upregulation of p21 and 14.3.3sigma. p21 inhibits binding of CDK2 and Cyclin E thus inhibiting the RB pathway while 14.3.3sigma binds to the CDC2\/Cyclin B complex leading to export from the nucleus which prevents G1 to M transition

Both p16 and p14ARF expression levels are low in normal tissue. Both proteins are upregulated in cells during in vitro senescence consistent with a role in ageing. Expression of p16 is often lost during progression of a tumour.

Following controversy concerning the cellular localisation of p16 it has recently been shown that p16 can be expressed in both the nuclear and cytoplasmic compartments and that both nuclear and cytoplasmic p16 forms complexes with CDK4 and CDK6. Cytoplasmic p16 occurs in two forms whilst nuclear p16 appears predominantly in just one.
The p14ARF protein is predominantly localised to the nucleolus but can also be detected in the nucleoplasm.

Cell cycle regulation. P16 inhibits the binding of CDK4 and 6 to Cyclin D preventing phosphorylation of Rb and leading to G1 arrest. P14ARF sequesters HDM2 in the nucleolus preventing the targeting of p53 for ubiquitination and thus p53 stabilisation and G2 arrest

The p16 protein has functional homology with p15 the product of the CDKN2B gene (exon 2 of both genes share 90% sequence homology), also located at 9p21. In contrast p14ARF appears to be unique with no obvious homology with any known proteins.

Mutation spectrum for Melanoma-Astrocytoma Syndrome families. The extent of some deletions (pale blue) were predicted according to the map of 9p21 region at the time of publishing which has since been revised. The known regions of deletion given the current knowledge of the map of 9p21 are shown in dark blue.

Germline mutations affecting the CDKN2A locus have been described for a number of melanoma-astrocytoma syndrome families. To date no mis-sense or nonsense mutations of the coding region have been identified. To date three families have been identified with deletions of part or all of the CDKN2 locus and a further two families have been identified with a splice acceptor mutation intron 1 of the CDKN2A gene leading to abnormal p16 and p14ARF mRNA transcripts. Concurrent loss of both p14ARF and p16 may therefore be responsible for the development of NSTs in this syndrome. In one family a deletion affecting the p14ARF-specific exon 1b was observed which was not predicted to affect p16 function suggesting abnormal p14ARF function alone may be the key factor in this family.

According to COSMIC somatic mutations of CDKN2A are found in approximately 24% of sporadic melanoma and around 22% of tumours of the central nervous system dependent on tumour type.