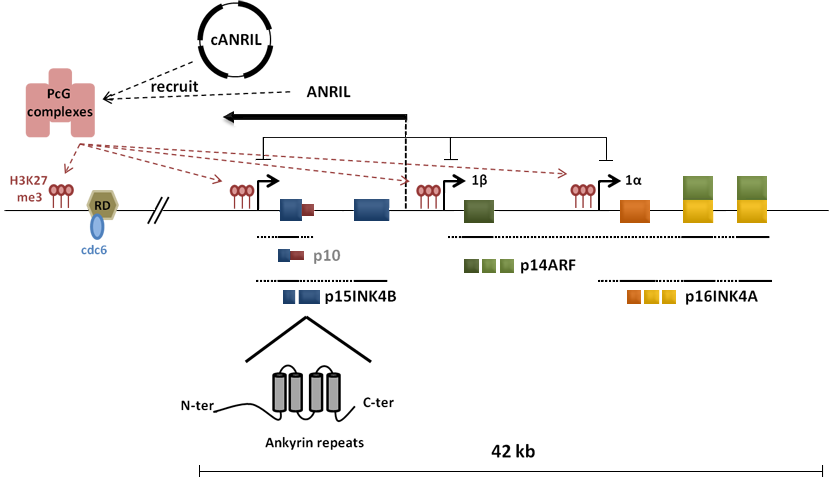 The p15INK4B gene encompasses 6.41 Kb of DNA and has 2 coding exons. It is tandemly linked to p16INK4A and p14ARF within 42 Kb of genomic locus located on chromosome 9p21. The locus is commonly referred to as INK4/ARF locus.

Regulation: A conserved DNA element with the ability to regulate the entire INK4/ARF locus has been identified in close proximity of the locus and named regulatory domain (RD). It appears to promote transcriptional repression of all three genes encoded by the locus, in a manner dependent on CDC6. In proliferating embryonic fibroblasts (MEFs), EZH2 a member of the polycomb repressive complex 2 (PRC2) as well as BMI1 and M33 members of the polycomb repressive complex 1 (PRC1) are strongly expressed and are found to localize to the INK4/ARF RD. BMI1 has been shown to interact specifically with CDC6. These polycomb group (PcG) complexes repress the locus activity through the establishment of repressive chromatin modifications such as H3K27 trimethylation. During senescence, binding of these complexes to RD is lost and correlates with increased expression of the INK4/ARF genes (Figure 1).
The p15INK4B gene is also silenced by a long non coding RNA, called antisense non-coding RNA in the INK4 locus (ANRIL), whose expression was found to be inversed to the expression of p15INK4B in leukemia cell lines. It was shown that ANRIL induces the silencing of p15INK4B in cis and trans by triggering heterochromatin formation in a Dicer-independent manner. PcG complexes are recruited to the INK4/ARF locus by ANRIL and modulate its repression (Figure 1). Additionally, a naturally occurring antisense circular ANRIL RNAs (cANRIL) has also been described. Different forms of cANRIL are produced in most INK4/ARF expressing cells, suggesting that alternative splicing events leading to different ANRIL structures can contribute to changes in PcG-mediated INK4/ARF repression.
Specific transcription regulators of p15INK4B have also been reported (see Figure 2). These include TGF-b, MIZ-1, SMAD3/SMAD4 complex, SP1, c-MYC, IRF8, PU.1, SNAIL and EGR1 factors among others.
p15INK4B expression is dramatically induced by TGF-b, suggesting that it is a potent downstream effector of TGF-b mediated growth arrest.
MIZ-1 is a transcription factor that has been shown to bind the initiator element (Inr) in the promoter region and induce the transcription of p15INK4B in epithelial cells. However it can also recruit transcriptional co-repressors such as c-MYC and GFI-1 to the promoter region by binding to them and forming inhibitory complexes. TGF-b has been reported to re-activate the core promoter through downregulation of C-MYC and GFI-1, thereby releasing endogenous MIZ-1 from inhibition.
The SMAD3/4 complex readily forms following TGF-b treatment and physical interaction between this complex, MIZ-1 and promoter-bound SP1 protein has been described. These interactions have been proposed to constitute a platform for the recruitment of co-activators, and do not seem to be affected by the suppressor activity of c-MYC. The inhibitory function of c-MYC seems to be cell-type dependent, as it was confirmed in epithelial cells but not in the hematopoietic lineage. In myeloid cells, the transcription factor c-MYB was shown to prevent the transcription and the upregulation of p15INK4B which is normally associated with the differentiation process. The mechanism by which C-MYB does this is unclear but it is not through upregulation of c-MYC, a known target of c-MYB.
A tri-component transcriptional complex consisting of SNAIL, SP1 and EGR-1 was also described for its ability to trigger the p15INK4b promoter activation upon TPA treatment.
In murine myeloid cells specifically, the interferon consensus sequence-binding protein/interferon regulatory factor 8 (ICSBP/IRF-8) in combination with PU.1 were shown to bind p15Ink4b promoter and activate the transcription of the gene in response to IFN-b treatment.
In AML patients with inv(16), p15INK4B silencing was found to be caused by inv(16)-encoded core binding factor beta-smooth muscle myosin heavy chain (CBFb-SMMHC). CBFb-SMMHC was shown to displace RUNX1 from a newly determined CBF site in the promoter of p15INK4B.

p15INK4B transcript encodes two protein isoforms p15 and p15.5 that are functionally indistinguishable. p15.5 is an N-terminally extended variant of p15 initiated from an upstream alternative in frame initiation codon. p15 protein is 138 aa long and its mass is 14.72 KDa.
p10 transcript encodes the shorter variant. The protein consists of 78 aa only and its mass is 10 KDa. It shares a similar NH2 terminus to p15 but contains a different basic COOH terminus that is translated from the p15Ink4b intronic region (Figure 2).

p15INK4B is expressed at very low levels under normal physiological conditions. Its expression seems to be lineage restricted. In bone marrow cells the highest level of p15INK4B is mainly detected in maturing monocytes/macrophages and lymphocytes. The gene expression has also been reported to be normally up-regulated during megakaryocytic differentiation. Increased expression of p15INK4B is also detected during stress and senescence of cells.

I- Function in the cell cycle. p15INK4B belongs to the INK4 family of protein kinase inhibitors named for their high and exclusive specificity towards the catalytic activity of cyclin dependent kinases 4 (CDK4) or 6 (CDK6). Structural studies have demonstrated that the protein performs its inhibitory activity by allosteric competition with the D-type cyclins to bind CDK4/6 kinases and prevents the formation of active CDK4/6-cyclin-Ds complexes. This keeps the retinoblastoma protein (RB), which is downstream of this pathway, in its hypophosphorylated state. Hypophosporylated RB binds and inactivates the E2F transcription factors required for the transcriptional activation of genes necessary for entry into the S phase of the cell cycle and DNA synthesis.
Three other members of the INK4 family of CDK inhibitors: p16INK4A, p18INK4C and p19INK4D are encoded by unique genes and share roughly 40% homology. They have similar protein structure characterized by the presence of four ankyrin-like motif tandem repeats that are predicted to be engaged in protein-protein interactions.
II- Function during hematopoietic cell differentiation. Another role for p15INK4B during differentiation of early hematopoietic progenitors has also been described. In knockout mice, loss of p15INK4B was shown to favor the differentiation of common myeloid progenitors (CMP) into granulocyte macrophage progenitors (GMP) resulting in an imbalance between the myeloid and the erythroid compartments.
III- Function during cellular senescence. Cellular senescence is accompanied by hallmark features that include the up-regulation of cell cycle inhibitors like p15INK4B, p16INK4A and p21CIP. When overexpressed, p15INK4B engages the RB pathway to promote a stable senescent state which has been shown to occur in part through a process that involves alterations in heterochromatin and the stable silencing of E2F target genes.
Another mechanism that has been described is the inactivation of c-MYC which results in the induction of p15INK4B expression and correlates with the global changes in heterochromatin structure known to be associated with cellular senescence.

p15INK4B is highly conserved. Its sequence in homo sapiens is > 85% similar to bos taurus, mus musculus and rattus norvegicus; and > 70% similar to gallus gallus.