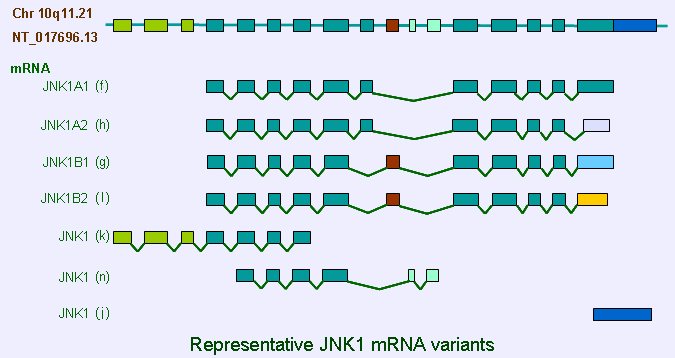 The members of JNK family act as an integration point for multiple intracellular biochemical signals governing a wide variety of cellular processes such as proliferation, differentiation, apoptosis, migration, transcriptional regulation, and development JNK targets specific transcription factors and thus mediates immediate-early gene expression in response to various stress signals including ultraviolet (UV) radiation, oxidative stress, protein malfolding in endoplasmic reticulum, osmotical shock, and inflammatory mediators. These transcription factors include AP-1, ATF-2, Elk-1, p53, etc... Several upstream dual specific protein kinases, such as MKK4/SEK1 and MKK7, can activate JNK through phosphorylation of the conversed Thr-Pro-Tyr motif on JNK proteins. In mammalian cells, activated JNK can phosphorylate the N-terminus of c-Jun, which contains both JNK docking site and JNK phosphorylation site (ser63 and ser73), orJunD, which lacks a JNK docking site but contains a JNK phosphorylation site. JNK is unable to phosphorylate JunB due to the lack of a JNK phosphorylation site inJunB, despite there is a functional JNK docking site. Comparison of the binding activity of JNK isoforms demonstrates that JNK2 bind c-Jun approximately 25 times more efficiently than did JNK1. Therefore, individual members of the JNK family may selectively target specific transcription factors in vivo. One of the most important functions of JNK is the regulation of apoptosis. Emerging evidence indicates that JNK activation is obligatory for apoptosis induced by both receptor-mediated "extrinsic" pathway or mitochondria-mediated "intrinsic" pathway. JNK activation may contribute to the initiation of Fas-induced apoptosis, possibly through the amplification of autocrine or paracrine Fas signaling by JNK-dependent Fas ligand (FasL) gene expression. In addition, JNK has been indicated in the apoptosis induced by Daxx, a Fas death domain (FADD) interaction protein. Through its serine/threonine kinase activity, JNK may contribute to mitochondria-mediated apoptosis by phosphorylating pro- or anti-apoptoticBcl-2 family proteins. Finally, JNK has also been indicated as an important kinase phosphorylating p53 and subsequently facilitating p53-dependent apoptotic responses. Sustained JNK activation may be responsible for the enhanced apoptosis observed in RelA-/- or Ikkb-/- mouse embryonic fibroblasts treated with TNFa. It was suggested that deficiency of RelA or IKKb caused a decreased expression of XIAP or GADD45b, which may antagonize the activation of JNK activation. However, such speculation contradicts the previous observations indicating that both GADD45b and XIAP are activators, rather than inhibitors for JNK activation. Moreover, gene profiling in our recent studies indicated no substantial difference of basal or inducible GADD45b and XIAP mRNA in wild type cells and Ikkb-/- cells.