MTA3 functions as a transcriptional repressor through interacting with histone deacetylases and nucleosome remodelling complexes such as Mi-2\/NuRD. Since MTA3 inhibits expression of SNAIL, a transcriptional repressor of the cell adhesion protein E-cadherin, downregulation of MTA3 was found to be associated with reduced E-cadherin levels and advanced cancer stages. Recent data also revealed upregulation of MTA3 in non-small lung cancer cells and highly aggressive subtypes of endometrial cancer, additionally indicating cancer-promoting effects of MTA3.

Genomic organization of the human MTA3 gene. The intron/exon structure of MTA3 with start (ATG) and stop (TAA) codons indicated. All 14 exons are depicted; the intron sequences shortened for better graphical visualization.

MTA3 functions as a transcriptional repressor by interacting with histone deacetylases and nucleosome remodelling complexes such as Mi-2/NuRD.

MTA3 expression has been found in normal human breast, ovarian, lung, and endometrial epithelial cells, in malignant breast, ovarian, lung, and endometrial cancer cells and cancer cell lines, in trophoblast cells and chorionic cancer cell lines, in germinal centre B cells, and in B cell-derived lymphomas. A tissue distribution analysis of MTA3 expression in mice revealed a widespread distribution of MTA3 in the developing embryo and in adult tissues (heart, brain, spleen, lung, liver and kidney).

MTA3 exhibits primarily a nuclear localisation, although additional cytoplasmic localisation has been described. 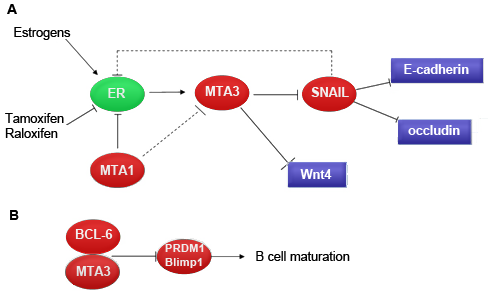 In epithelial cells, MTA3 maintains the expression of E-cadherin through the suppression of the E-cadherin inhibitor SNAIL. Expression of MTA3 is regulated by oestrogens via direct binding of the oestrogen receptor to the MTA3 promoter and is thus involved in the generation and maintenance of oestrogen-dependent epithelia such as the breast ductal epithelium.
Mammary gland development
Animal experiments revealed involvement of MTA3 expression in mammary gland morphogenesis mediated by the suppression of the Wnt4 signalling pathway and upregulation of epithelial cell adhesion proteins such as E-cadherin.
Normal mammary gland development, as confirmed and studied by several knock out and knock in mouse models, relies on the concerted and correct integration of divers signalling pathways, including the Wnt signalling pathway. Secretion of Wnt factors and their binding by mammary epithelial cells is necessary for correct gland development and its deregulation has been described to be involved in tumorigenesis. MTA3 has been shown to inhibit Wnt4 expression by its transcriptional repression function, causing reduced Wnt4 secretion and subsequent lower beta-catenin levels. Therefore, based on the observations made with transgenic mouse models, expression of MTA3 in mammary epithelial cells has been associated with the inhibition of ductal branching in virgin and pregnant murine mammary glands.
Epithelial cancer
Reduced MTA3 expression in epithelial breast cancer, endometrial cancer, and ovarian cancer is associated with cancer progression by promoting the epithelial-mesenchymal transition (EMT). It is principally believed that reduced expression of MTA3 allows higher expression levels of SNAIL and SLUG, two repressors of metastasis-associated cell adhesion proteins such as E-cadherin and occludin. Conversely, MTA3 expression was found to be elevated in non-small lung cancer and in uterine non-endometrioid cancer, in which a growth-promoting effect of MTA3 overexpression was suggested.
Haemangiogenesis and lymphomagenesis
A high expression level of MTA3 was found in germinal centre B lymphocytes, suggesting an involvement in B cell maturation by direct interaction with BCL6. BCL6 (B-cell lymphoma-6) is a transcriptional repressor that is co-expressed with MTA3 in the germinal centre, where normal B cells proliferate and undergo maturation. BCL6 functions as a transcriptional repressor and suppresses, in cooperation with MTA3, the expression of PRDM1 (Pr domain-containing protein 1), a master regulator of plasma cell differentiation. Overexpression of BCL6 is often observed in lymphomas, especially in large B-cell lymphomas. Thus, the cooperative action of BCL6 together with MTA3 is believed to block differentiation of large B-cell lymphomas, facilitating lymphomagenesis.
Placenta development
A conspicuously high expression level of MTA3 in trophoblast cells and trophoblast tumour cells has suggested involvement of MTA3 in placenta development and homeostasis. MTA3 expression was found to be elevated in preeclampsia patients and to negatively interfere with hCG (human chorionic gonadotropin) expression.