A 2,5 kb transcript of TGF-β1 has been described (Derynck et al., 1985). A subsequent study showed that human TGF-β1 transcript is 381 bases shorter than the original because the ATTAAA polyadenylation signal is located at position 2136 instead of 2517 (Scotto et al., 1990). 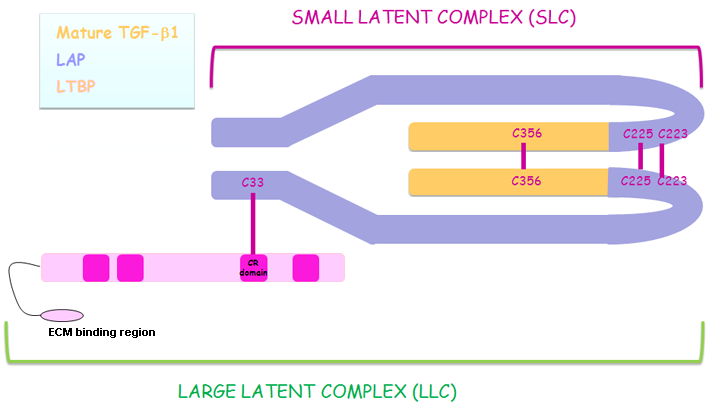 Figure 1: TGF-β1 structure. Small latent complex (SLC) is formed by one LAP segment and the mature TGF-β1. Monomers of these proteins dimerize forming disulfide bridges between C223 and C225 in the LAP and C356 in mature TGF-β1 forming a dimeric structure. Large latent complex (LLC) is formed by SLC and LTBP protein. Disulfide bridges are formed between C33 of LAP protein and the third 8-Cys repeat (CR domain) of LTBP. LLC can bind to extracellular matrix (ECM) through ECM domain in LTBP.

TGF-β1 is a dimeric cytokine which shares a cysteine knot structure connected together by intramolecular disulfide bonds.
It is synthesized as a 390-amino acid precursor protein (pre-pro-TGF-β1 or small latent complex (SLC)) with a molecular weight of 25 kDa (Massague, 1990; Annes et al., 2003). The pre-pro-TGF-β1 is a monomer with three distinct parts: the signal peptide (SP: aminoacids 1-29), the latency associated peptide (LAP: aminoacids 30-278) and the mature peptide (mature TGF-β1: aminoacids 279-390) (Figure 1).
The SP targets the protein to a secretory pathway and it is cleaved off in the rough endoplasmatic reticulum where two monomers dimerize forming a disulfide bridge between cys 223 and 225 in the LAP and cys 278 in the mature TGF-β1. SLC is formed by the cleavage of arginine in position 278 by a furin convertase. The LAP peptide prevents the interaction between TGF-β1 and its receptors.
The SLC might associate covalently with a latent TGF-β1 binding protein (LTBP) which helps in SLC secretion and storage in the extracellular matrix (Koli et al., 2001).

TGF-β1 is secreted as an inactive precursor bound to the Latency Associated Peptide (LAP), forming the complex called Small Latent Complex (SLC). SLCs are secreted from cells and deposited into the extracellular matrix as covalent complexes with its binding proteins, also known as Latent TGF-β Binding Proteins, LTBPs (Koli et al., 2001). The latency proteins contribute to TGF-β1 stability. Active TGF-β1 half-life is about two minutes whereas LTBPs half-life is about 90 minutes. In cells, active TGF-β1 is forming a large ligand-receptor complex involving a ligand dimer and four receptor molecules.

TGF-β1 has an important role in controlling development, tissue repair, immune defense, inflammation and tumorigenesis (Roberts, 1998). Moreover, TGF-β1 is involved in the interactions between epithelia and the surrounding mesenchyme, promoting epithelial-to-mesenchymal transition (EMT) (Massague et al., 2000).
Active TGF-β1 is released as a dimer due to proteolytic cleavage of LAP at low pH or via interactions with other proteins such as thrombospondins and αVβ6 integrin (Koli et al., 2001; Derynck et al., 2003). TGF-β1 bounds to the serine-threonine kinase TGF-β type I receptor (TβRI) and recruits a constitutively phosphorylated TGF-β type II receptor (TβRII) that phosphorylates the regulatory segment, a 30-amino-acid region of the TβRI and forms a heterotetrameric receptor complex.
This complex activates both SMAD dependent and independent pathways such as STRAP (Datta et al., 1998), TRAP-1 (Charng et al., 1998), FKBP12 (Wang et al., 1994) and Ras/Raf/ERK (Matsuzaki, 2011). In the SMAD-dependent pathways, the receptor complex (or directly the type I receptor) phosphorylates receptor-regulated SMADs (R-SMADs: SMAD1, SMAD2, SMAD3, SMAD5 and SMAD8) which can now bind the cooperative SMAD (co-SMAD) SMAD4. SMAD6 and SMAD7 have inhibitory effects on TGF-β1 (Feng and Derynck, 2005). The R-SMAD/coSMAD complexes accumulate in the nucleus where they interact with DNA and other transcription factors and participate in the regulation of 100-300 target genes expression (Massague et al., 2005) (Figure 2). 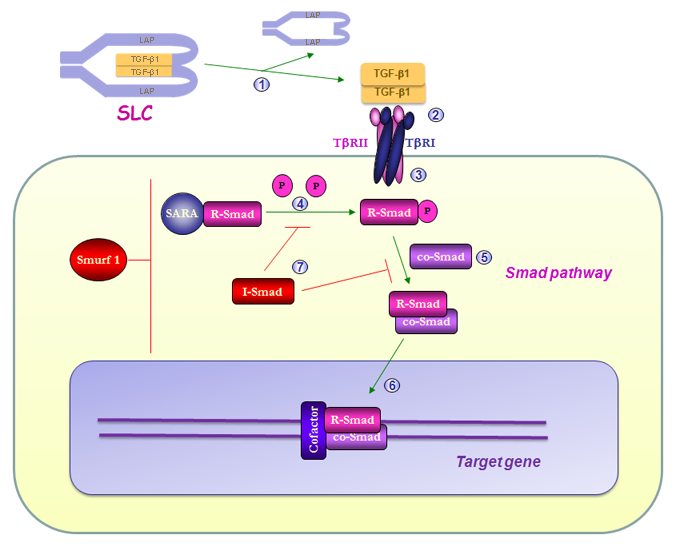 Figure 2: TGF-β1 signalling through the Smad-dependent pathway. 1) Mature TGF-β1 is released by different mechanisms such as degradation of LAP by proteases, induction of conformational change in LAP by interaction with thrombospondin or by rupture of noncovalent bonds between LAP and TGFβ-1. 2) Active TGFβ-1 binds to receptor type II (TβRII) which is constitutively phosphorylated and active. 3) The TGF-β1-TβRII complex recruits and activates TβRI by transphosphorylation of the GS domain. 4) The heterotetrameric receptor complex phosphorylates R-SMAD at the C-terminal SSXS domain. SARA protein promotes the binding of R-SMAD with TβRI. 5) The phosphorylation of R-SMAD allows the interaction with Co-SMADs. 6) This complex can translocate to the nucleus, joining the DNA and inducing or modulating the transcription of different target genes. 7) I-SMAD can inhibit signalling through the blockade of the access of the receptor complex to R-SMAD by mechanical interaction or inducing TβRI degradation by ubiquitination.

Heterozygous mutations in TGFB1 gene result in Camurati-Engelmann disease type I (CED; MIM#131300). One of the most common mutations replaces the amino acid arginine with the amino acid cysteine at position 218 in the TGFβ-1 protein (written as Arg218Cys or R218C).

Overexpression or alteration of active TGFβ-1 protein induced by somatic mutations in the TGFB1 gene are implicated in certain types of cancers (prostate, breast, colon, lung and bladder cancers).