Figure 1: Genomic organization of NFATC2. The NFATC2 gene is localized on the minus (-) strand of the 20q13.2 chromosome. Black boxes resemble untranslated regions (UTRs); colors of translated exons correspond to protein domains (see later); boxe sizes are in proportion to exon size.

Transcription of the gene is from the - strand. Transcribed sequence contains both a 5and a 3-UTR region. The 5-UTR is located in exon 10 and the full exon 11 and is > 4500 bases in size. The large UTR indicates transcription control by small non-coding RNA and/or large non-coding RNA sequences (ensembl, last viewed at 10-04-2012).

NFATc2 is part of the NFAT family of transcription factors. The conserved region of all NFAT proteins consists of two domains. The first is the NFAT Homology region (NHR) which is the regulatory domain. It contains a strong transactivation domain and many serine residues that are phosphorylated when the protein is inactive and resides in the cytoplasm. There are two serine rich regions (SRRs) and three SPXX-repeat motifs (SPs), where X stands for any amino acid. Calcineurin and NFAT kinases regulate the activity of the NFAT proteins by determining the phosphorylation status of the serine residues, interacting with NFAT proteins at the NHR.
Another, highly conserved region of the NFAT family is the DNA binding domain that is structurally related to the DNA binding domain of the Rel-Family of transcription factors. This domain, called the REL homology region (RHR) is also responsible for binding partner proteins like the AP1 complex.
There are three alternative splice variants of the NFATC2 protein, all of which occur in the C-terminal domain of the protein (Macian, 2005).

Inactive NFATC2 normally resides in the cytoplasm where the serine residues in the NHR are phosphorylated. This phosphorylated state of the NHR results in configuration changes of the protein shielding the nuclear localisation signal (NLS). Activation of NFATC2 is regulated by a pathway including calcium influx to the cytoplasm, calmodulin and calcineurin. In response to various stimuli, calcium enters the cytoplasm from the environment and intracellular stores. Calcium binds calmodulin and this complex activates calcineurin. The activated calcineurin will dephosphorylate the SRRs and SPs of the NHR, resulting in the exposure of the NLS and translocation of the protein to the nucleus. Translocated NFAT binds to consensus DNA sites (WGGAAANHN (H is not G, N is any of the four nucleotides)) and control gene transcription with the help of other nuclear complexes such as the AP1 protein complex (Macian, 2005).
Several kinases have been identified to rephosphorylate NFAT proteins at multiple sites, thereby controlling their nuclear shuttling. These kinases include glycogen-synthase kinase 3 (GSK3), casein kinase 1 (CK1), p38, and JUN N-terminal kinase (JNK). Some of them act as maintenance kinases, to keep the NFAT proteins in the cytosol in a fully phosphorylated state, preventing them from nuclear shuttling. Others act as export kinases; they rephosphorylate NFAT in the nucleus and thereby promote the nuclear export of NFAT, stopping the NFAT driven transcription after calcineurin activity declines.
Another regulatory mechanism has been discovered for NFAT proteins which uses a non-coding RNA (ncRNA). Functional analysis of ncRNAs found a Non-coding repressor of NFAT (NRON). When NRON was deactivated by small hairpin RNA (shRNA), a dramatic increase in NFAT activity was measured. NRON directly binds to 11 proteins, of which four are repressors of NFAT. NRON probably interacts with the nuclear shuttling of NFAT proteins which is demonstrated by an increase in nuclear localisation upon treatment with NRON shRNA (Rao et al., 1997; Willingham et al., 2005; Macian, 2005).
At this moment, 8 different microRNAs, which target 5 locations on the NFATC2 gene have been discovered (ensembl last viewed at 10-04-2012).

In its inactive form, NFATC2 resides in the cytoplasm. When activated it translocates to the nucleus (Macian, 2005).

NFATC2 is a transcription factor that forms complexes with other nuclear proteins including the AP-1 complex and regulates transcription of a large number of genes. It thereby regulates many processes including cell differentiation, migration and angiogenesis. It is, together with the other NFATs, essential for the development of multiple organ systems, including the nerve and immune system, the heart and skeletal muscles, the vasculature, the lungs and the skeletal structures. Because of their multiple functions, dysfunction of NFATs may play a role in pathobiology of cancer (Wu et al., 2007; Macian, 2005).

Entity name
Ewing sarcomalike small blue round cell tumour
Note
The NFATC2 gene was found to be involved in a chromosomal translocation found in an Ewing sarcomalike small blue round cell tumour. In this entity, the EWSR1 gene is fused in frame with the NFATC2 gene resulting in a chimera gene. In addition, an amplification of the chimera gene has been observed, something that hasnt been seen in other EWSR1 gene translocation tumours (Szuhai et al., 2007; Szuhai et al., 2009).

Figure 3: Translocation at DNA level. Numbers correspond to exon numbers; black regions are untranslated regions; box sizes are in proportion to exon size; colors correspond to protein domains.
Fusion protein
In the chimera protein, the regulatory domain of the EWSR1 protein is fused with the functional domain of the NFATC2 gene. EWSR1 is a member of the TET family of proteins and has a predominantly nuclear localization. It contains a domain for nucleic acid binding and has, among others a function in RNA polymerase II- mediated transcription and premRNA splicing. In the chimera protein, the N-terminal regulatory domain of NFATC2 is completely replaced by the regulatory domain of the EWSR1 protein. In this way, the localization of the NFATC2 containing chimera is not under the control of the Ca2+ dependent calcineurin/calmodulin phosphorylation. Instead, the chimera gains the strong, highly conserved NLS of EWSR1 which leads to uncontrolled shuttling of the chimera to the nucleus. Also, because the transcription of the chimera is under control of the regulatory domain of EWSR1, the regulatory loop of NFATC2 is abrogated. The RHR of NFATC2, which is responsible for DNA binding and the complex formation with other proteins such as the AP-1 complex is completely retained in the chimera (Szuhai et al., 2009; Tan et al., 2009). 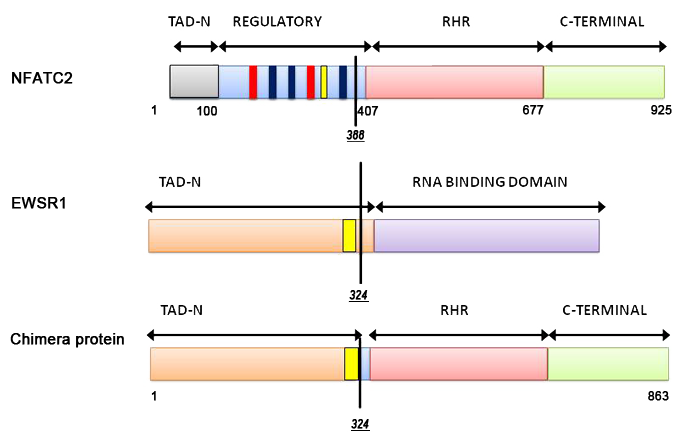 Figure 4: Translocation at protein level. Yellow box corresponds to nuclear localisation signal.
Oncogenesis
Some homology can be seen between this recently described small blue round cell tumour and Ewing sarcoma. In Ewing Sarcoma, the EWSR1 gene forms a chimera with members of the ETS family. In this entity, the member of the ETS family is replaced by NFATC2. The consensus sequence for the ETS family contains a core domain of GGAW (W is a wobble for A or T), whereas the conserved core domain for NFAT is WGGAAANHN (H is not G, N is any of the four nucleotides). There is complete overlap between the core domain of ETS and NFAT for the GGAA sequence variant, which might be responsible for the similar histological features of tumors despite the involvement of different transcription factor families.
Both ETS family members, the EWS/FLI chimera and NFATC2 form complexes with AP-1. It has yet to be determined whether the EWSR1/NFATC2 chimera does this as well (Szuhai et al., 2009; Sankar et al., 2011).
Entity name
Non small cell lung cancer
Note
The expression of NFATC2 in non small cell lung cancer is positively correlated with progression in TNM stage: the higher the TNM stage, the higher the expression of NFATC2. High expression of NFATC2 is also a predictor for a low post-operative survival indicating that it promotes lung cancer and metastasis by serving as an oncogene (Chen et al., 2011).
Entity name
Breast cancer
Note
Stat 5 signalling.
Stat5, a member of the signal transducers and activators of transcription (stat) family of proteins, promotes tumor growth, but suppresses metastasis in breast cancer. NFATC2 has exactly the opposite effects; it inhibits tumor growth and promotes tumor metastasis. NFATC2 down regulates the Stat5 signaling pathway and vice versa. Also, the expression of the two genes is negatively correlated in a breast cancer progression tissue micro array (TMA). NFATC2 is expressed more in metastatic tissue than in normal tissue and primary tumor but Stat5 is the other way around (Zheng et al., 2011).
Entity name
Various cancers
Note
Regulation of tissue micro environment.
Experiments in mice have been performed to assess the influence of NFATC2 on metastasis formation and growth. Therefore NFATC2 null(-/-) mice were compared with NFATC2 normal(+/+) mice after intravenous injection of F16F10 melanoma cells. NFATC2-/- mice showed less and smaller metastases. Both the NFATC2 null(-/-) and wild type mice were treated with a wild type bone marrow transplantation to make sure differences were caused by the lack of NFATC2 in the lung parenchyma and not because of a dysfunction of the immune system (Werneck et al., 2011).
In hepatocellular carcinoma, colon carcinoma and breast cancer, NFATC2 plays an important role in regulating genes that affect tumoral phenotype such as cyclooxygenase-2 (COX-2). COX-2 is a key regulator in the expression of matrix metalloproteinase 1 and matrix metalloproteinase 2 and thereby of tumour invasion (Lara-Pezzi et al., 2002; Duque et al., 2005; Yiu et al., 2006).
Entity name
α6β4 integrin signalling
Note
NFAT signalling (including NFATC2 signalling) is part of the pathway that is activated in α6β4 integrin mediated cell invasion and migration. This pathway leads to the expression of autotoxin. It is suggested that α6β4 integrin mediated cell invasion is at least in part due to the increased expression of autotoxin (Jauliac et al., 2002; Chen et al., 2005).