There is an SOX2OT (SOX2 overlapping transcript) that encodes a non-coding RNA. SOX2OT contains at least five exons and is transcribed into a mRNA of about 3.4 kb from the same strand as SOX2.

A picture showing the relationship between SOX2 and SOX2OT (adapted from http://genome.ucsc.edu).

SOX2 is a single exon gene that encodes a member of the SRY-related HMG-box (SOX) family of transcription factors. The SOX2 single exon contains the 5 untranslated region, CDS region and the 3 untranslated region (427 bp, 954 bp, 1122 bp). The HMG box is a DNA binding domain that is highly conserved throughout eukaryotic species.

The 2503 bases of human SOX2 mRNA contains an open reading frame of 954 bases, resulting in a protein of 318 amino acid residues. 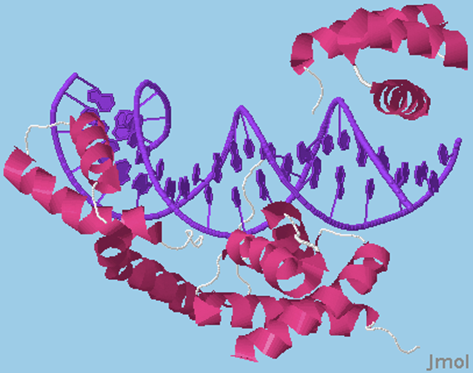 The 3D structure for the ternary complex of the DNA binding domains of the Oct1 and Sox2 transcription factors with a 19mer oligonucleotide [5- D(Tpgptpcptptptpgptpcpaptpgpcptpapaptpg) -3], left view (http://oca.weizmann.ac.il/oca-bin/ccpeek?id=1O4X). The top chain molecule is the SOX2 DNA binding domain.

The SOX2 protein binds to DNA. The 3D structure for the ternary complex of the DNA binding domains of the Oct1 and Sox2 transcription factors with a 19mer oligonucleotide was solved (Williams et al., 2004; http://oca.weizmann.ac.il).

SOX2 is overexpressed in stem cells and many different kinds of cancer cells, including glioma, breast cancer, colorectal cancer and etc.

SOX2 is involved in the regulation of embryonic development and in the determination of cell fate. SOX2 is one of the four transcription factors (SOX2, KLF4, OCT4 and c-Myc), whose over expression can induce pluripotency in both mice and human somatic cells (Takahashi and Yamanaka, 2006; Takahashi et al., 2007). Again, SOX2 is one of the genes in another set of four factors (OCT4, SOX2, NANOG and LIN28) that were able to reprogram human somatic cells to pluripotent stem cells and that exhibit the essential characteristics of embryonic stem (ES) cells (Yu et al., 2007). SOX2 is one of the two factors (SOX2 and OCT4) that were sufficient to generate induced pluripotent stem cells from human cord blood cells (Giorgetti et al., 2010).

So far, twenty SOX genes have been identified in humans and mice and they can be divided into 10 subgroups on the basis of sequence similarity and genomic organization (Bowles et al., 2000; Schepers et al., 2002). SOX genes bind to the minor groove in DNA to control diverse developmental processes (Wegner, 1999). Three genes, SOX1, SOX2 and SOX3, show the closest homology to SRY and share the maximum homology within the HMG domain. These genes also share significant homology outside the HMG box and are highly conserved throughout their evolution.

Entity name
Glioma
Note
SOX2 expression was found to be highly expressed in almost all glioma samples. In agreement with the heterogeneity of the cell population present in each glioma, typically containing cells at various stages of differentiation, SOX2 is expressed in a highly variable percentage of cells, in the range of 6%-80% in different samples (Annovazzi et al., 2011; Gangemi et al., 2009).
Disease
Gliomas are the primary cancers derived from glial cells in the brain. It is the most frequent cerebral neoplasias. Astrocytomas are the most common type of gliomas. They are slow-growing, and can be found anywhere in the brain, but most often found in the cerebrum. They can be clinically divided into four grades, with glioblastoma (World Health Organization grade IV) being the most common and aggressive.
Entity name
Lung cancer (small cell lung cancer; lung squamous cell carcinomas)
Note
SOX2 was detected in 50% SCLC cell lines. Hussenet et al. identified SOX2 as an oncogene and likely driver gene of one of the most frequent amplification sites in lung SCC (Hussenet et al., 2010; Sholl et al., 2010a; Sholl et al., 2010b).
Disease
Lung cancer results from the uncontrolled growth of abnormal cells in lungs. It is the leading cause of cancer death for both men and women. Close to 90 percent of lung cancers are smoking related.
Small cell lung cancer (SCLC) is a highly aggressive form of lung cancer that accounts for approximately 20% of all cases of lung cancer. SCLC is a carcinoma of neuroendocrine origin, in contrast to non-SCLC (NSCLC), which is of bronchial epithelial origin.
Squamous cell carcinoma (SCC) of the lung is a frequent and aggressive cancer type. It is closely correlated with a history of tobacco smoking, more so than most other types of lung carcinoma (Hussenet et al., 2010).
Entity name
Gastric cancer (stomach cancer)
Note
SOX2 expression was significantly down-regulated in gastric carcinoma tissues compared with normal gastric epithelia. SOX2 could induce cell-cycle arrest associated with decreased levels of CCND1 and phosphorylated Rb, and up-regulated p27Kip1 level (Otsubo et al., 2008).
Disease
Gastric cancer, commonly referred to as stomach cancer, forms in tissues that line the stomach. Adenocarcinomas is the most comnon type (90-95%),but there are other types of stomach cancer including squamous cell carcinoma, lymphoma, and stromal tumors. Gastric cancer is the second most frequent cause of death from cancer in both sexes in the world.
Entity name
Breast cancer
Note
SOX2 nuclear protein level was highly associated with basal-like phenotype in human breast cancer. Knockdown of SOX2 could inhibit tumorgenesis in vitro and in vivo (Chen et al., 2008).
Disease
Breast cancer forms in the tissues of one or both breasts. It primarily affects women, but can also occur in children and men. It can be a highly curable disease if detected and treated early.
Entity name
Colorectal cancer
Note
SOX2 expression in colorectal cancer tissues was found overexpressed in the cancerous tissues compared to normal adjacent tissues. Knockdown of SOX2 in colorectal cancer cells decreased their growth rates in vitro cell line and in vivo in xenograft models (Fang et al., 2010).
Disease
Colorectal cancer is the second most common malignancy in cancer patients and cause of cancer-related mortality. Colorectal cancers develop slowly over many years, initially as a polyp in the inner lining of the colon or rectum, which may progress into cancerous lesions called adenocarcinomas. More than 95 percent of colorectal cancers are adenocarcinomas. Removing the polyp early may prevent progession to cancer. Other less common types of colorectal cancers include carcinoid tumors, gastrointestinal stromal tumors and lymphomas.