The L1CAM gene is 24,657 bp in length, consisting of 28 exons according to Ensembl and Entrez-gene.

There are 7 transcripts of the gene according to Ensembl. 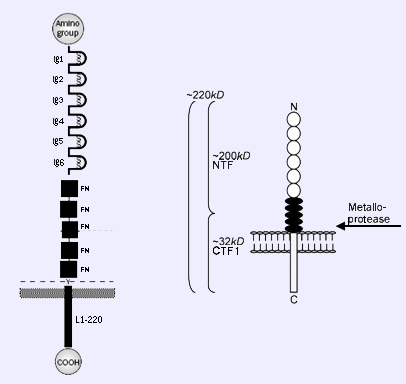 L1CAM (L1) is a 200-220 kD glycoprotein and a member of the immunoglobulin superfamily. This type-1 transmembrane protein consists of six immunoglobulin like domains at the amino terminal end of the molecule followed by five fibronectin type III homologous repeats, a single transmembrane region and a short intracellular domain (Moos et al., 1988). Two splicing variants are known encoding for 1257 and 1253 amino acids proteins.

L1 plays a critical role in axon outgrowth and fasciculation, neuronal migration and survival, synaptic plasticity and regeneration after trauma (Maness et al., 2007). L1 can interact with itself (homophilic) but also with a variety of heterophilic ligands such as integrins, CD24, neurocan, neuropilin-1 and other members of the neural cell adhesion family. In many incidences the binding sites in the L1 molecule have been mapped. The RGD site in the sixth Ig domain supports α5β1, αvβ3,5 integrin-mediated cell binding and the first Ig domain can bind to the proteoglycan neurocan or the VEGF-R2-coreceptor neuropilin-1.
Beside its cell surface localization, L1CAM can also be cleaved by several proteases, i.e. the matrix metalloproteinases ADAM10 and ADAM17, metalloprotease PC5A proprotein convertase or by γ-secretases (Maretzky et al., 2005). Soluble L1CAM has been reported to be important for migration of neuronal as well as of tumor cells (Maretzky et al., 2005; Mechtersheimer et al., 2001), and several studies support a role for L1CAM in tumor growth (Arlt et al., 2006), tumor cell invasion, metastasis of melanoma, ovarial and colon cancer (Mechtersheimer et al., 2001; Gavert et al., 2005; Fogel et al., 2003) and chemoresistance (Sebens Müerköster et al., 2007; Stoeck et al., 2007).
L1 transiently activates pp60c-src, phosphoinositide 3-kinase (PI3 kinase), the VAV2 guanine nucleotide exchange factor, the RAC1 GTPase and p21-activated kinase (PAK1) in a pathway culminating in MEK and ERK activation.