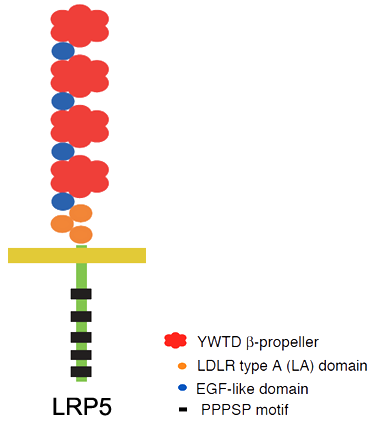 LRP5 contains a large extracellular domain (ECD) making up over 85% of the approximately 1600-amino-acid protein. At the amino terminus of the ECD, four beta-propeller motifs and four epidermal growth factor (EGF)-like repeats create the binding sites for extracellular ligands. These domains are followed by three LDLR type A (LA) domains. The intracellular domain of LRP5 contains 5 PPPSP motifs, to which Axin preferentially binds after phosphorylation of the PPPSP motif induced by Wnt ligands. Tamai et al. showed that Wnt activates LRP5s homologue, LRP6, by inducing LRP6 phosphorylation at the PPP(S/T)P motifs, which serve as inducible docking sites for Axin, thereby recruiting Axin to the plasma membrane.

Widely expressed, with the highest level of expression in the liver.
Post-translational modification: Phosphorylation of the PPPSP motif creates an inducible docking site for Axin. Palmitoylation is required for LRP6 to exit the endoplasmic reticulum (ER).

Involved in the Wnt/beta catenin signaling pathway, acting as a co-receptor together with Frizzled for Wnt ligands. 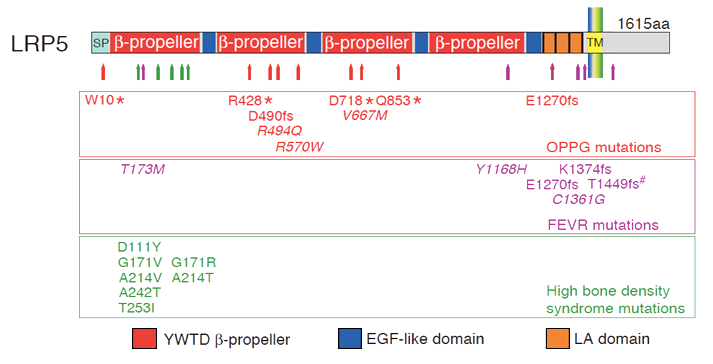 Westins group reported that the tumor-associated shorter transcript of LRP5 containing an in-frame deletion of 142 amino acids (D666-809) was strongly implicated in deregulated activation of the Wnt/beta-catenin signaling pathway in hyperparathyroid tumors and mammary gland tumorigenesis.