Fzd4 is a receptor for Wnt proteins, belonging to the frizzled receptors family. Its stimulation can activate both Wnt\/β-catenin canonical and Wnt\/Ca2+<\/sup> non canonical pathways. This receptor plays an important role in the development processes, in particular in the retinal vascularization: it binds the Norrin ligand, a Wnt-unrelated growth factor, and activates β-catenin signalling pathway. Mutations of FZD4 gene are associated with Familial Exudative Vitreoretinopathy (FEVR). Recently dysregulation of FZD4 expression has been reported in different type of cancers, but FZD4 contribution in tumor pathogenesis and progression is still not entirely elucidated.

Figure 1: Schematic representation of FZD4 gene that contains a total of two exons and FZD4 transcript.

DNA size: 9.71kb encoding two exons. This gene has one transcript (splice variant), 82 orthologues, 12 paralogues (www.emsable.org). Sagara et al., reported a splice variant of FZD4 gene which they called FZD4SA, it retains intronic sequence and encodes shorter isoform of only 125 aa. However, its expression is not supported by other experimental evidences.

The gene FZD4 encodes a 537 aa protein with a molecular weight of 59 kDa. FZD4 is a member of the seven transmembrane receptor family consist of 10 receptors that are activated by Wnt family of lipo-glycoproteins. The Wnt/ FZD signaling is involved in a variety of biological processes and its dysregulation have been implicated in cancer development. FZD4 protein contains the N-terminal signal peptide (aa 1-36) that assurances proper membrane insertion of the protein, an extracellular cysteine rich domain (CRD; aa 40-161), which creates the binding site for WNT ligands, a seven-pass transmembrane domain (aa 161-221) that gives rise to three intracellular loops, three extracellular loops and a C- terminal domain (aa 221-537). The CRD domain is necessary to bind WNT ligands or Norrin ligand leading to initiation of distinct downstream signaling pathways. (Schulte G., 2010). 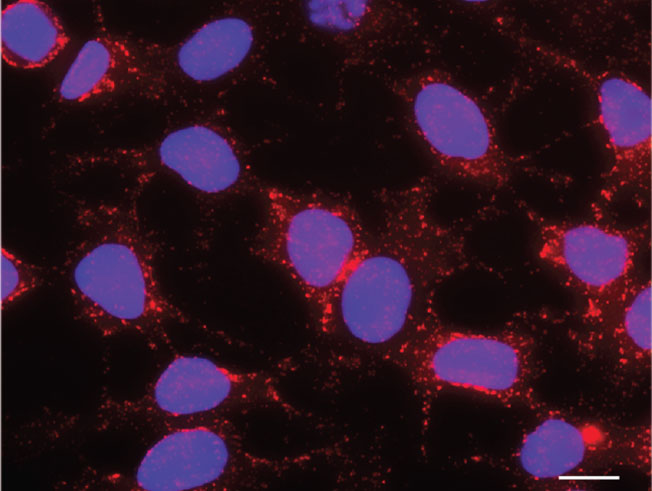 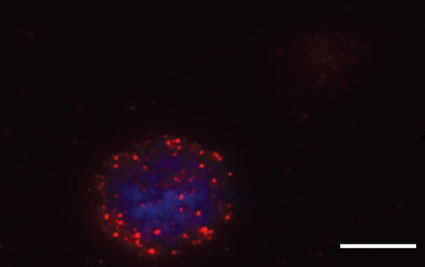 FZD4 is localized on the plasma membrane surface. It can be internalized through both constitutive and agonist dependent endocytosis in response to Wnt5a stimulation (Chen W. et al., 2003).

Figure 3. Schematic illustrating the activation of βcatenin via the FZD4 receptor.