A single mRNA of 1748 nucleotides is expressed from the plus strand and includes a 699 coding sequence, a 201 5 UTR and a 848 3 UTR (ENST00000307365, Ensembl Genome Browser database). Note minor discrepancy in non-coding region (4 nucleotides) between NCBI and Ensembl annotation.

REDD1 is a highly conserved protein of 232 amino acids, with a predicted molecular weight of 25 kDa. Apparent molecular weight on SDS-PAGE is 35 kDa. Amino acid sequence analyses do not show any known structural or functional domains. The crystal structure revealed a new fold and a conserved surface patch that is essential for function (Vega-Rubin-de-Celis et al., 2010). 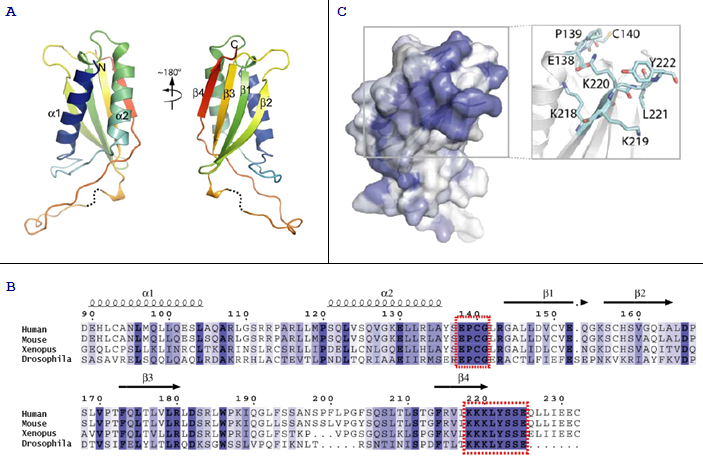 REDD1 is conserved from insects to humans, especially in the C-terminal region (Vega-Rubin-de-Celis et al., 2010). The N-terminal 84 amino acids of REDD1 are dispensable for function. The REDD1 crystal structure includes residues 89-226 and has a deletion of a few hydrophobic residues (200-204) that are dispensable for function (Vega-Rubin-de-Celis et al., 2010). The REDD1 protein has two antiparallel α-helices followed by a mixed β-sheet, containing 4 β-strands ordered 2134. Strands β1-β3 make an unusual structural motif known as a psi-loop, two antiparallel strands separated by a third that makes hydrogen bonds with the two flanking strands.
A conserved surface patch that is essential for REDD1 function has been identified. This patch is formed by two regions: a loop between helix α2 and strand β1 (residues 138-141) and residues 218-225, which encompass the C-terminal portion of the strand β4.
REDD1 is an unstable protein, with an estimated half-life of 5-10 min (Kimball et al., 2008; Katiyar et al., 2009). REDD1 has been shown to be phosphorylated at T23 and T25 and phosphorylation at these sites has been postulated to regulate REDD1 half-life. These sites are in an N-terminal region that is dispensable for mTORC1 inhibition (Vega-Rubin-de-Celis et al., 2010). Based on in vitro kinase assays, it was postulated that the kinase implicated in REDD1 phophorylation is Glycogen Sinthase Kinase 3β (GSK3β). HA-GSK3β isolated from transfected HEK293 cells can phosphorylate GST-REDD1 (Katiyar et al., 2009). However, whether GSK3β phosphorylates endogenous REDD1 is still unknown. How these phosphorylation events are implicated in REDD1 stability is also unclear. Katiyar et al. reported a modest increase in REDD1 half-life upon treatment with LiCl, a GSK3β inhibitor, in HEK293 cells. In addition, REDD1 T23A/T25A mutants transfected in HEK293 cells are more stable than wild-type REDD1. However, 35S Methionine/Cysteine pulse-chase experiments in HeLa cells suggested that REDD1 wild-type and the T23A/T25A mutants have a similar half-life and LiCl had no effect on the half-life of endogenous REDD1 in these cells (Vega-Rubin-de-Celis and Brugarolas, unpublished results).
REDD1 half-life has been proposed to be regulated by the CUL4A-DDB1-ROC1-βTRCP-E3 ubiquitin ligase complex (Katiyar et al., 2009). In overexpression experiments in HEK293 cells, Flag-REDD1 was found to interact with the complex components Myc-CUL4A, AU1-DDB1 and HA-βTRCP. In addition, endogenous REDD1 was shown to bind to DDB1 and βTRCP in MCF-7 cells exposed to hypoxia and the proteasome inhibitor MG132 (Katiyar et al., 2009). Furthermore, knock-down of βTRCP by siRNA in MCF-7 cells increased the REDD1 half-life to 25 minutes (Katiyar et al., 2009). Knock-down of other complex components (CUL4A and DDB1) also increased REDD1 half-life, but to a lesser extent (10-15 minutes) (Katiyar et al., 2009).
Several large-scale proteomic studies showed that REDD1 is ubiquitinated at K129 (Meierhofer et al., 2008; Xu et al., 2010; Danielsen et al., 2011; Kim et al., 2011; Lee et al., 2011; Shi et al., 2011; Wagner et al., 2011). Whether this modification affects REDD1 stability (or function) is unknown and K129 is not conserved across species.
Thioredoxin-Interacting protein (TXNIP) has been shown to bind to REDD1 and TXNIP overexpression in HeLa and H1299 cells increased REDD1 levels (Jin et al., 2011). However, these experiments were performed with ectopically expressed protein and whether the endogenous proteins interact and whether TXNIP regulates REDD1 stability remains to be determined.
A yeast-two hybrid screen of a human leukocyte library reported several putative binding proteins (Gery et al., 2007), and other studies identified other REDD1 interacting proteins including TXNIP (DeYoung et al., 2008; Jin et al., 2011). However, none have been validated with endogenous REDD1 protein.

REDD1 is developmentally regulated. Redd1 expression has a similar pattern as p63, being expressed at early stages in the apical ectodermal ridge and later on, at ectoderm-derived tissues (Ellisen et al., 2002). Interestingly, p63-/- embryos have lower Redd1 levels suggesting that p63 is an important developmental regulator of REDD1 (Ellisen et al., 2002).
REDD1 mRNA is broadly induced in response to hypoxia (Shoshani et al., 2002; Wolff et al., 2011). Using mice with a gene trap reporter (β-geo) inserted in Redd1 intron 2, Wolff et al. showed that Redd1 is induced after 1h of hypoxia in most of the tissues analyzed, with the exception of cardiac and skeletal muscle. Redd1 was broadly induced in endothelial cells as well as in cells in the crypts of the small bowel, bronchial epithelial cells, cells in zone 3 in the liver, cells lining the collecting ducts of the kidney, red pulp and histiocytes in the spleen and Purkinje cells in the cerebellum (Wolff et al., 2011).
REDD1 is a hypoxia inducible factor (HIF) target (Shoshani et al., 2002). HIF-1 and -2 are heterodimeric transcription factors containing an α-subunit that is regulated by oxygen levels through hydroxylation (Ivan et al., 2001; Jaakkola et al., 2001; Masson et al., 2001; Yu et al., 2001) and a β-subunit (also called aryl hydrocarbon receptor nuclear translocator, ARNT) that is stable (Semenza, 2006). Hydroxylated HIFα is recognized by an ubiquitin ligase complex containing the von Hippel-Lindau (pVHL) tumor suppressor protein (Cockman et al., 2000; Kamura et al., 2000; Ohh et al., 2000; Tanimoto et al., 2000). It has been shown in cell lines and mouse models that REDD1 induction is VHL and HIF-dependent (Kucejova et al., 2011). REDD1 is a target of both HIF1α and HIF2α, as assessed by ChIP assays and siRNA experiments in clear cell renal cell carcinoma (ccRCC) cell lines 786-O, A498 and Caki-2 (Kucejova et al., 2011).
MEFs deficient for ataxia telangiectasia mutated (ATM) are unable to induce HIF1α (and REDD1) in response to hypoxia suggesting that, at least in some contexts, ATM may be required for HIFα stabilization (Cam et al., 2010).
Besides hypoxia, REDD1 is also induced in response to a variety of other stress conditions, including ER stress (Wang et al., 2003; Whitney et al., 2009), osmotic stress (Wang et al., 2003) and in response to DNA-damaging agents (Ellisen et al., 2002; Lin et al., 2005a). Other REDD1 inducers include glucocorticoids (Wang et al., 2003; Boldizsar et al., 2006) and all-trans-retinoic acid (ATRA) (Gery et al., 2007).

REDD1 has been reported to be localized in both nuclear and cytosolic compartments in overexpression experiments (Ellisen et al., 2002; Lin et al., 2005b). Biochemical fractionation studies of the endogenous protein did not show REDD1 in the nucleus, but indicated that REDD1 is both in a cytosolic and a membrane compartment (DeYoung et al., 2008). In Redd1-/- MEFs transduced with a retroviral vector encoding for REDD1, REDD1 localized to the mitochondria (Horak et al., 2010). Further studies are required with the endogenous protein. However, preliminary experiments (both in normoxia and hypoxia conditions) suggest that REDD1 is in the cytosol and that it is peripherally associated with a membrane compartment (Vega-Rubin-de-Celis et al., unpublished results).

A frameshift inactivating mutation (c.550delC) was found in ccRCC (Kucejova et al., 2011). However, no other REDD1 mutations where identified in sequencing analyses of 77 tumors.

Entity name
Cancer
Note
DDIT4 has been shown to be mutated in a handful of cancers at low frequency. However, mutations may not be detrimental and while it would be fitting for a negative mTORC1 regulator to act as a tumor suppressor, whether this is the case remains to be determined and no tumor predisposition has been reported in Ddit4-deficient mice. Interestingly, REDD1 is over expressed in most of the ccRCC tumors, due to the loss of pVHL and HIF1/HIF2 stabilization. Paradoxically this increase does not lead to mTORC1 inhibition, and mTORC1 is usually activated in ccRCC (Kucejova et al., 2011).
Entity name
Viral infection
Note
REDD1 has been recently implicated as a host defense factor in response to viral infections. In Redd1-/- MEFs, there is increased viral protein translation after viral infection in a mTORC1 dependent manner (Mata et al., 2011). Treatment with Rapamycin downregulated viral proteins in both Redd1+/+ and Redd1-/- MEFs, suggesting that the mTORC1 is implicated in viral protein synthesis. Naphthalimides (which inhibit NS1, an influenza A virus virulence factor) induce REDD1 and inhibit mTORC1 thereby reducing viral protein production. REDD1 may be essential for their antiviral effect, as the antiviral effect was abolished in Redd1-/- cells. Similarly, in Tsc2-/- cells naphthalimides failed to downregulate viral protein expression.
Entity name
Parkinson disease
Note
Redd1 was found to be increased in cellular and animal models of Parkinson disease (Malagelada et al., 2006; Malagelada et al., 2008). It has been shown to increase neuronal cell death through a mechanism involving mTORC1 and Akt. In PC12 cells treatment with 6OHDA induces Redd1 and increases cell death; this phenotype is rescued by knock-down of Redd1. Furthermore, Redd1 overexpression is sufficient to induce cell death.