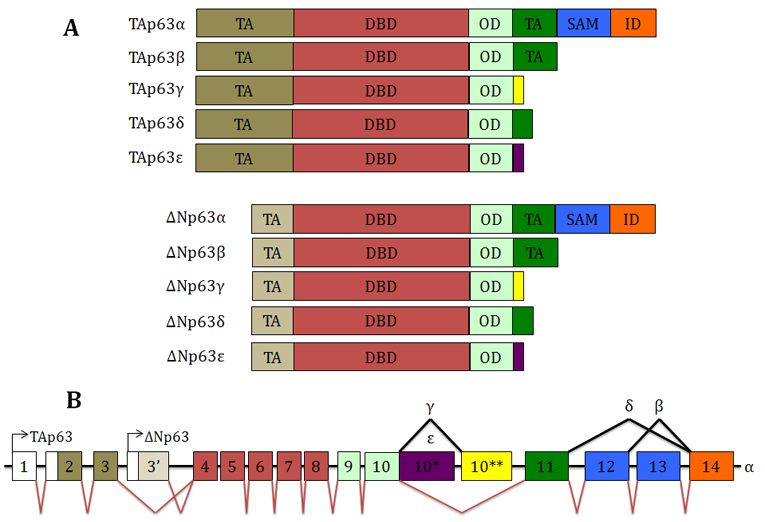 Human TP63 encodes the p63 protein, of which the longest isoform contains 680 amino acids, has molecular weights ranging from 44 to 77 kDa, depending on specific alternative promoter usage and alternative splicing (Augustin et al., 1998; Yang et al., 1998). TP63 comprises up to five types of domains, depending on the isoform, and may contain transactivation (TA), DNA Binding (DBD), oligomerization (OD), C-terminal sterile alpha motif (SAM), and/or C-terminal transcription inhibitory (ID) domains (Moll and Slade, 2004). The N-terminus may consist of a TA domain or a truncated version (ΔN) lacking the acidic TA domain that is derived from an alternative promoter and initiation codon in intron 3 (Yang et al., 1998). The 3 end of both TAp63 and ΔNp63 may be alternatively spliced to yield isoforms α, β, γ, and δ, while the ε-isoform is formed from transcriptional termination in exon 10 (Mangiulli et al., 2009). TAp63α and ΔNp63α contain a protein-protein interaction SAM domain and a trans-inhibitory domain, resulting from the masking of N-terminal TA domain residues. The δ- and ε-isoform proteins are formed by transcriptional termination in the second TA domain and after the OD, respectively (Mangiulli et al., 2009) (figure 1).

Structure
TP63 binds DNA as either a homo- or a heterotetramer, with isoform composition of the tetramer possibly determining transactivation activity. p63 may also form mixed dimers or tetramers with p73 at relatively higher affinity than with p53, suggesting functional cross talk to regulate transcriptional activity (Davison et al., 1999; Natan and Joerger, 2012). p63 appears to form a dimer of dimers, with monomers consisting of a β-strand followed by two helices (H1 and H2) that adopt a z-shaped double-hairpin conformation with little intramolecular contact between structural elements (Natan and Joerger, 2012). Monomers dimerize via intermolecular antiparallel β-sheet interactions and antiparallel packing of the H1 helices, with important hydrophobic contacts made by key leucine, valine, tyrosine, methionine, and isoleucine residues (Natan and Joerger, 2012). Tetramers are formed by hydrophobic H1-H1 interactions and H2-mediated contact where the H2 helices from the primary dimer clasps the adjacent dimer, packing the tetramer in an orthogonal fashion via H1 helices arrangement (Natan and Joerger, 2012). Analysis of the DBD of TP63 shows higher similarity to that of p73 than p53, and appears to bind a 10-bp DNA sequence containing a "CATG" motif with A/T-rich flanking regions (Chen et al., 2011).

In addition to humans, the TP63 gene is conserved in chimpanzees, dogs, cows, mice, rats, chicken, and zebrafish, and evolutionary precursors have been detected in Cnidarians.