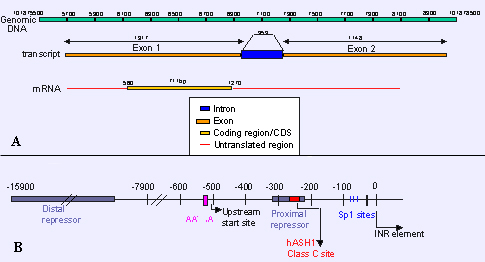 This gene encodes a member of the basic helix-loop-helix (bHLH) family of transcription factors. The protein activates transcription by binding to the E box (5-CANNTG-3). Dimerization with other bHLH proteins is required for efficient DNA binding. This protein plays a role in the neuronal commitment and differentiation and in the generation of olfactory and autonomic neurons. It is highly expressed in medullary thyroid cancer (MTC) and small cell lung cancer (SCLC) and may be a useful marker for these cancers. The proximal coding region of the cDNA contains a striking 14-copy repeat of the triplet CAG that exhibits polymorphism in human genomic DNA The presence of a CAG repeat in the gene suggests that it could play a role in tumor formation.
Protein size: 237 aa, 25.45kDa. Refseq: NP_004307.2

The amino terminal of the protein contains poly alanine and poly glutamine repeat rich region. The polyglutamine length polymorphism in ASCL1 has been postulated that it could influence predispositions to Parkinsons disease. The carboxy terminus of the protein contains the basic helix loop helix domain, which is important for interaction with other transcription factors.

The gene product is expressed basically nuclear and is expressed in tissues like brain, lung and nervous system.