Rubin et al., 1990 noted that t(3;21) represents 3,6% of therapy related MDS/AMLs (t-MDS/AML); they did not find one case of t(3;21) amongst 1500 de novo MDS/AMLs.
Yin et al., 2006 noted that 15 of their 16 BC-CML patients had previously been treated with hydroxyurea, before blast crisis. The occurrence of the t(3;21) heralded blast transformation. The authors conclude that prior treatment with hydroxyurea or other antimetabolites (fludarabine, 5-fluorouracil) are implicated in t(3;21) malignant blood diseases. Paquette et al., 2011, report that MECOM (also known as EVI1) translocations were seen in 12% of BC-CML before tyrosine kinase inhibitors treatments, a percentage reaching 35-40% with current treatments. The authors note that BCR-ABL1 and MECOM collaborate in leukemogenesis in animal models. Coexistence of BCR-ABL1 and MECOM translocation is sufficient to cause evolution towards BC-CML. The interval between the diagnosis of the initial neoplasm and the occurrence of the t(3;21) was 24 months (median, range 3-154 months) in CML-->BC-CML, and 38 months (median, range 6-144 months) for MDS/AML cases (Yin et al., 2006).
In our meta-analysis, 81% of 33 cases of BC-CML and 87% of 31 cases of MDS/AML can be considered to be secondary to previous treatment.
Results presented herein can be compared with those of a study from an International Workshop on treatment related leukemia: "t(3;21)(q26;q22) in treatment related leukemia". 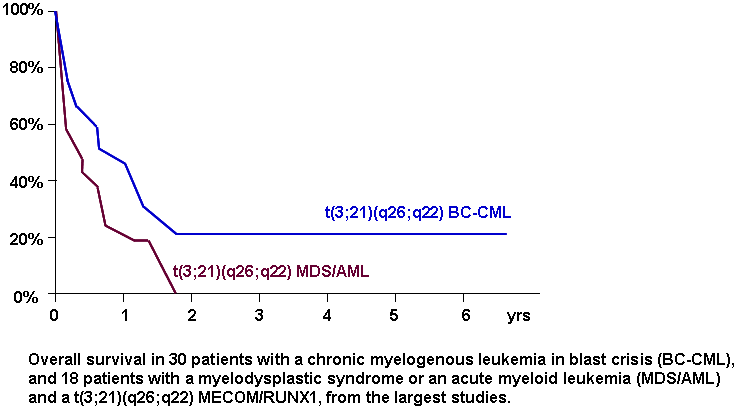 Breakpoint after exon 5 or 6 in RUNX1. Breakpoints are variable and dispersed along EVI1, MDS1 and the telomeric region of these two genes (Poppe et al., 2006).

Fusion gene: on the der(3); 5 RUNX1 - 3 MECOM.RUNX1/MECOM: 180 kDa. The translocation protein includes the N-term RUNX1 with the Runt domain and most of the gene MECOM, from the second untranslated exon of EVI1 to C-term, which includes the 2 zinc finger motifs, the repression domain, and the acidic domain, or also including the MDS1 PR domain followed by EVI1 domains as noted above.

Inappropriate and ectopic expression of MECOM (either as EVI1 or as MDS1-EVI1) (Poppe et al., 2006; Lugthart et al., 2010); interferes with RUNX1 functions in a dominant negative manner. 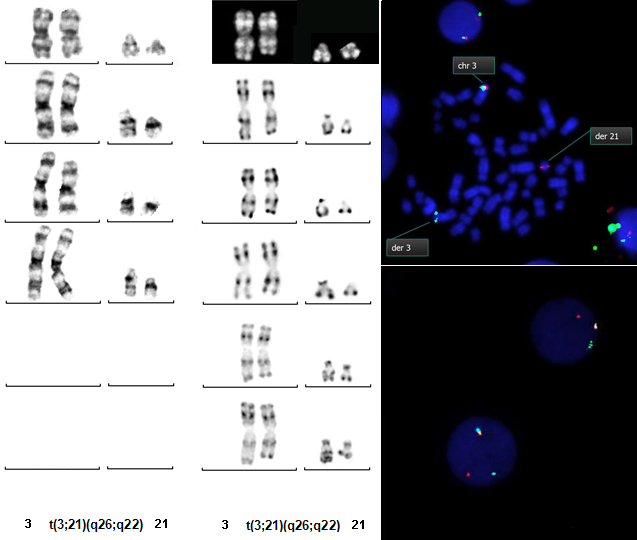