On a limited series, the median patient age is 3 years, the female/male ratio of 2.0 has been reported. Risk group stratification was nonstandard risk in 79%. The event-free survival and overall survival at 5 years for the 24 Nordic cases was 0.62 and 0.82, respectively. Thus, although relapses are quite common, post-relapse treatment of many patients is successful.

Chromosomes 7, 9, 12 and 20 are frequently involved in the formation of dicentric chromosomes in BCP-ALL. The dic(9;20)(p11~13;q11) occurs in approx 2% and approx 0.5% of childhood and adult BCP-ALL, respectively. FISH has shown that dic(9;20) contains the centromere of both chromosomes, resulting in loss of 9p and 20q material. It is a subtle chromosome abnormality, often appearing as monosomy 20, sometimes with apparent deletion of 9p; confirmation of the dic(9;20) translocation is obtained by FISH (Figure 1).

Even at the cytogenetic level, considerable breakpoint heterogeneity is apparent on both chromosomes. Array-based comparative genomic hybridization (aCGH), with BAC clones at tiling resolution, has shown clustering of breakpoints within 9p13.2 (genomic position 37.1-38.7Mb) and 20q11.2 (29.2-30.8Mb). Recent FISH mapping data has confirmed this heterogeneity in a large series of dic(9;20) patients (Figure 2). 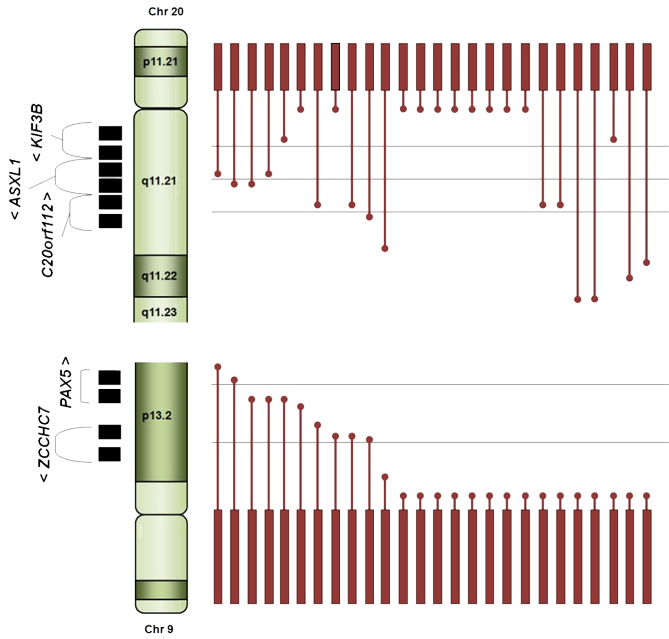 Figure 2. Breakpoint heterogeneity on chromosome 9 and 20 in the dic(9;20). A partial idiogram for each of the chromosomes is shown on the left for chromosomes 9 and 20. Each black filled square shows the position of a FISH probe in relation to the gene of interest. Each column shows an individual patient with the position and extent of the deleted region represented by vertical red bar.

The dic(9;20) can occur as a sole cytogenetic abnormality, or in the context of a more complex karyotype. Gains of chromosome X and 21 are the most frequency additional findings in these patients. Diagnostic FISH data shows that the dic(9;20) can occur in the presence of the BCR-ABL1 and ETV6-RUNX1 fusion genes.

Gene name
PAX5 (paired box gene 5)
Location
9p13.2
Dna rna description
The paired box 5 gene (PAX5) extends over 200kb of genomic DNA and contains 10 exons.
Protein description
The gene encodes a transcription factor, with a highly conserved DNA-binding domain, known as a paired box. PAX5 is a 42kDa protein of 391 amino acids that encodes the B-cell lineage specific activator protein that is expressed at early, but not late stages of B-cell differentiation. The protein is expressed during B-cell lineage commitment during early B-cell development and maintenance.

FISH analysis has shown that in spite of the breakpoint heterogeneity, the PAX5 gene is targeted at high frequencies, by a variety of genetic mechanisms. Breakpoints proximal to PAX5 can be in euchromatic or heterochromatic regions of the chromosome and result in deletion of PAX5 in the majority of cases. Less frequently, breakpoints can occur within the PAX5 gene and result in aberrant fusion sequences with regions of chromosome 20. Breakpoint cloning experiments have shown PAX5 sequence juxtaposed to several genes on 20q including ASXL1, C20ORF112 and KIF3B (Figure 3). The genes involved in these fusion sequences are either in opposing orientation, or in the same orientation and out-of-frame, suggesting the biological consequence of these fusion events in loss of function.
Quantitative PCR (qRT-PCR) has confirmed disruption of PAX5 in the context of the dic(9;20), by showing deregulated expression of PAX5 and several key downstream PAX5 target genes, including, BLK, EBF1 and FLT3. In the case of PAX5-C20ORF112, it has been shown that the C-terminal of the PAX5 protein is replaced by that of the partner gene, which does not change the affinity for the protein to bind to recognition sites, but does effect the expression of certain downstream PAX5 target genes. Furthermore, transfected vectors encoding the PAX5-C20ORF112 are able to suppress the transcriptional activity of wild-type PAX5, leading to the inhibition of B-cell development. Sequence analysis and genomic quantitative PCR have also shown that the PAX5 allele not involved in the translocation can be targeted by mutations and homozygous deletions.
Further sequence analysis of the dic(9;20) is beginning to unravel the heterogeneity on chromosome 20, and identify recurrent targets. It has been suggested that C20ORF112 may be the recurrent target gene on chromosome 20, but this has not been supported by other studies. In addition to C20ORF112, FISH and molecular investigations have implicated the recurrent involvement of ASXL1.
Advances in recent years have expanded our understanding of the dic(9;20), most notably with the identification of PAX5 on 9p. However, there are exceptionally rare cases where PAX5 is not deleted or fused though mutations of deletions beyond the resolution of FISH cannot be excluded. The key genes on 20q remain to be fully elucidated. 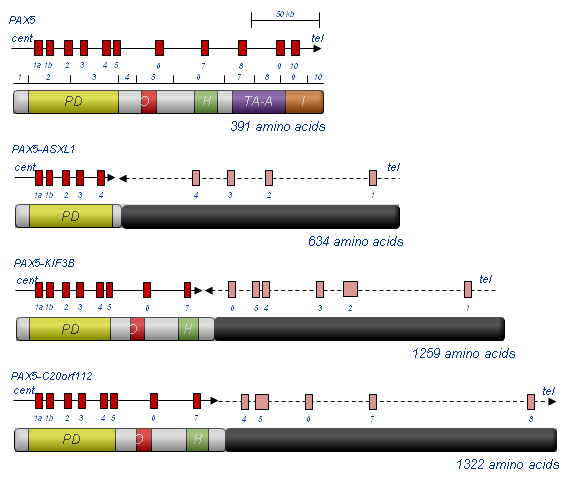 Figure 3. Schematic of PAX5 fusion sequences. The exons of the PAX5 and partner genes are shown in red and pink respectively. The gene orientation is shown by the horizontal arrow. Below each schematic is the corresponding predicted protein structure and domains. 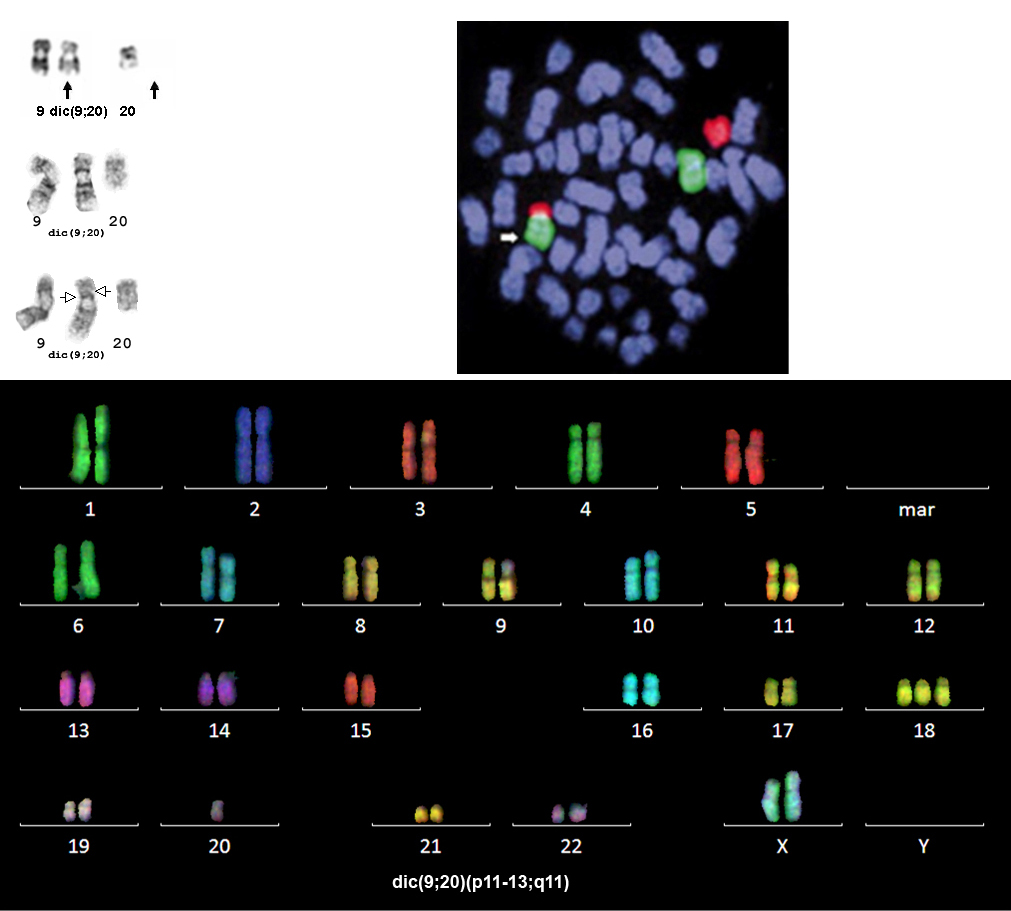