Plasma cell myeloma (PCM) is a complex and genetically heterogenous hematological malignancy involving clonal proliferation of plasma cells in bone marrow. It is the third most common hematolymphoid malignancy in the United States and primarily affects elderly people with a median onset age of 69 years and a survival duration ranging from a few months to more than 10 years. Standard karyotype and fluorescence in situ hybridization (FISH) evaluation of bone marrow is required in the initial diagnostic workup to risk stratify patients based on their cytogenetic status. Primary cytogenetic events are classified as either hyperdiploid or non-hyperdiploid. Common in non-hyperdiploid cases is rearrangement of the IGH gene on chromosome 14q32.33, most commonly with the CCND1 gene at 11q13.3, and to a lesser extent FGFR3/MMSET genes at 4p16.3 or the MAF gene at 16q23.2. The rarest of these IGH translocations involves the MAFB gene at 20q12, which is the subject of this review.

Can be found in plasma cell myeloma, monoclonal gammopathy of undetermined significance (MGUS), smoldering myeloma, plasma cell leukemia, and plasmacytoma.
Collectively, the term plasma cell neoplasms include a number of disorders characterized by monoclonal gammopathy. The most common of these disorders, monoclonal gammopathy of undetermined significance (MGUS), is characterized by the infiltration of clonal plasma cells into bone marrow (<10% plasma cells on bone marrow biopsy) and secretion of monoclonal protein (<3g/dl of M protein). This condition is asymptomatic and precedes the development of PCM. The risk of progression is 1% per year and approximately 20% progressing to PCM or a related condition ( AL amyloidosis, Waldenstrom macroglobulinaemia, or a lymphoproliferative disorder) over 25 years. While certain clinical, imaging, and molecular biomarkers have been proposed to risk stratify patients that may require frequent monitoring for progression to overt malignancy, none are presently considered reliable. Important to the diagnosis of MGUS is an absence of evidence of end-organ damage defined by CRAB criteria (hypercalcemia, renal insufficiency, anemia, and/or bone disease with lytic lesions). Some cases of MGUS will pass through an intervening stage known as smoldering myeloma (SM), characterized by higher M-protein values (≥ 3g/dl) and >10% plasma cells on bone marrow biopsy, but without CRAB criteria. The risk for progression to PCM is higher, with 10% per year progressing to PCM in the first five years. 3% per year for the next 5 years, and 1% per year for the subsequent 10 years [Kumar et al, 2017, Cosemans et al, 2018].
A diagnosis of plasma cell myeloma requires detection of a monoclonal protein by serum protein electrophoresis (SPEP), urine protein electrophoresis (UPEP), or by pathological serum free light chain (sFLC) ratio along with a plasma cell count ≥ 10%. The development of end-organ damage is the indication for treatment. Other possible pathological presentations of a plasma cell neoplasm include a non-secretory myeloma which requires >30% plasma cells, a non-systemic solitary plasmacytoma, or plasma cell leukemia with a peripheral blood plasmacytosis >20% [Rollig et al, 2015].

Post-germinal center, terminally differentiated plasma cell.
Plasma cells develop from hematopoietic stem cells that differentiate first into B-cells, then eventually after several rounds of differentiation into plasma cells. The final differentiation stage of B-cells occurs in bone marrow and involves rearrangement of the immunoglobulin heavy chain gene (IGH), followed by rearrangement of the light chain genes [IG kappa (IGK) and IG lambda [IGL)]. The mature B cell than exits the bone marrow to populate secondary lymphoid organs where it will continue its maturation. Somatic hypermutation occurs within the germinal centers of these secondary lymphoid organs, involving stochastic mutations within the VDJ segment. The final maturation stage involves class switch recombination, resulting in the mature B-cell expressing IgG, IgA, or IgE. The mature B-cell will now either differentiate into a memory B-cell or return to bone marrow as a long-lived plasma cell [Corre et al, 2015].

The cause of PCM is unknown, but potential environmental and occupational risk factors have been proposed. In addition, genetic risk factors have been elucidated through genome-wide association studies (GWAS) which have identified multiple susceptibility loci, as well as loci associated with inferior survival and with development of drug-induced toxicity (such as bortezomib-induced neuropathy) [Kumar et al, 2017].

PCM accounts for approximately 1.8% of all cancers and a little more than 17% of all hematologic malignancies in the United States. According to the American Cancer Society, an estimated 30,280 new cases will be diagnosed in the United States in 2017, with an estimated 12,590 deaths. The incidence of PCM is 2-3 times higher in African-American individuals compared with Caucasians. The prevalence has increased, likely because of better diagnostic techniques and increased survival as the result of novel therapeutic agents and autologous stem cell transplantation [Kumar et al, 2017].
Approximately 40-50% of myeloma cases demonstrate an IGH gene rearrangement. The t(14;20)(q32;q12) is the rarest of the five most common IGH-rearrangements, found in approximately 1% of cases [Manier et al, 2016].

After developing a primary genetic abnormality, either hyperdiploidy or an IGH gene rearrangement, plasma cells induce stromal cells to produce numerous cytokines, especially interleukin-6. Plasma cells undergo additional genetic alterations that prevent normal cell differentiation and apoptosis. The end result is the immortalization of a plasma cell clone. Recent DNA sequencing studies have identified two types of clonal evolution in plasma cell myeloma. Genetic heterogeneity appears to be acquired either through linear evolution with acquisition of secondary mutations over time in the original clone or through branching evolution, whereby multiple subclones diverge to produce greater genetic heterogeneity. Such subclones, it is theorized, coexist and compete for space and stromal support within the bone marrow microenvironment. The kinetics of this evolution has important implications for therapy [Coore et al, 2015; Pawlin et al, 2015].
Malignant plasma cells are positive by flow cytometry for CD138 and CD38, negative for CD19, and either positive or negative for CD45 and CD56. Immunohistochemical detection of CD138 (syndecan-1) helps to quantify plasma cell in tissue. Detection of CD56, cyclin-D1, and CD117 are also helpful.

Plasma cell myeloma cases with a t(14;20)(q32;q12) have a poorer prognosis; however, paradoxically, identification of the translocation in MGUS or SM may be associated with long-term stable disease [Ross FM et al, 2010]. This suggests that additional molecular events are necessary in those cases that progress to plasma cell myeloma, and that those secondary molecular events specifically associated with the rearrangement may be the factors actually responsible for the negative prognosis. A recent study demonstrated that cases of MGUS or SM that progress to overt myeloma do so through acquisition of mutations in APOBEC (apolipoprotein B mRNA editing catalytic polypeptide-like) cytidine deaminases [Bolli N et al, 2018]. Some myeloma patients are found to have coexistent hyperdiploidy (a good prognostic marker) as well as a high-risk IGH rearrangement such as the t(14;20). Single cell analysis reveals that hyperdiploidy may precede IGH translocation. In such cases, coexistent hyperdiploidy does not change the otherwise poor prognosis associated with the t(14;20) [Pawlyn C et al, 2015]. 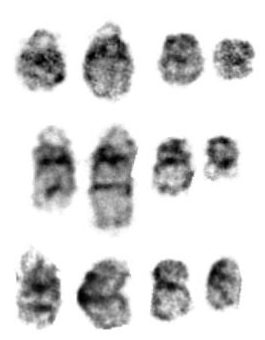 Partial karyotype demonstrating the t(14;20)(q32;q12). The normal chromosomes 14 and 20 are to the left of the derivative chromosomes.

The t(14;20)(q32;q12) is the rarest of the five most common translocations in myeloma that involve the IGH gene. It is found in about 1% of all myeloma cases, and in the few cases that have been reported, the translocation has been balanced. Unlike the other relatively uncommon IGH gene translocations t(4;14) and t(14;16) that are often undetectable by conventional cytogenetic analysis of bone marrow (which yields chromosomes of lower resolution and require FISH analysis), the t(14;20) can be observed in metaphase chromosome preparations. However, FISH utilizing an IGH/MAFB dual-color, dual-fusion translocation should still be performed to confirm the translocation, even in those cases which appear to demonstrate the translocation by karyotype.

FISH analysis utilizing a IGH/MAFB dual-color, dual-fusion translocation DNA probe reveals IGH/MAFB rearrangement (identified by a one red, one green, and two fusion signals hybridization pattern) in a patient positive for the t(14;20)(q32;q12).

Gene name
IGH (Immunoglobulin Heavy Locus)
Location
14q32.33
Protein description
This gene encodes a protein which comprises the heavy chain of human immunoglobulins. Immunoglobulins recognize foreign antigens and initiate immune responses. Each immunoglobulin molecule contains two identical heavy chains and two identical light chains.
Gene name
MAFB (v-maf Avian Musculoaponeurotic Fibrosarcoma Oncogene Homologue B)
Location
20q12
Protein description
This gene is one of the Maf family of transcription factors which includes MAFA, MAFB, MAF, and NRL (neural retina-specific leucine zipper). It consists of a single exon and codes for a protein which is a basic leucine zipper (bZIP) transcription factor that can act as either a transcriptional activator or repressor. It plays an important role in the regulation of lineage-specific hematopoiesis as well as in development.

The t(14;20)(q32;q12) results in upregulation of expression of the MAF paralogue MAFB. Gene expression studies have revealed that MAFB overexpression produces an expression profile similar to that observed in MAF overexpression, suggesting similar downstream targets [Zhan et al, 2006]. Using an inducible system to upregulate MAFB in multiple myeloma cell lines, fourteen upregulated genes were identified, including CCND1, CCND2, and NOTCH2. The same upregulated genes are, in fact, targets of the entire MAF group of transcription factors, suggesting similar pathogenic molecular mechanisms in both MAF and MAFB dysregulated myelomas [van Stralen et al, 2009].
Myeloma cases with either of the two poor prognosis translocations, t(14;16) (q32;q23) and t(14;20)(q32;q12) associated with MAF or MAFB gene dysregulation, respectively, have been shown to have a higher mutational burden than other cytogenetic groups of myeloma and to have an APOBEC gene signature resulting in overexpression of APOBEC3Aand APOBEC3B genes. ENCODE data demonstrates a maf transcription factor binding site in the promoter regions of both genes, providing the link between MAF or MAFB dysregulation and increased tumor load [Walker BA et al, 2015]. The t(14;16) and t(14;20) are known to be associated with long-term stable disease in MGUS and SM despite their poor prognostic indication in plasma cell myeloma. This raised the possibility that the APOBEC signature is acquired at a later stage in the disease, and only at that time does the condition transform to plasma cell myeloma. A very recent study has proven that APOBEC activity does, in fact, increase with disease progression from MGUS or SM to overt PCM [Bolli N et al, 2018].
Finally, genome-scale methylation profiling studies have shown that the MAFB protein establishes an epigenetic program in hematopoietic stem/progenitor cells which can reset the genome of such cells to a terminally differentiated tumor state [Vicente-Dueñas et al, 2012].