Pediatric-type follicular lymphoma (pFL), which was formerly a provisional diagnosis under follicular lymphoma, is a newly recognized entity in the 2016 WHO classification (Swerdlow et al., 2016). It is an extremely rare nodal B-cell lymphoma occurring predominantly in the pediatric and young-adult population, which shows unique characteristics distinct from the more common follicular lymphoma seen in adults (Louissaint et al., 2012).

Pediatric-type follicular lymphoma is a rare disease with incidence estimates of approximately 5% of all childhood lymphomas (OSuoji et al., 2016). The age of presentation is between the ages of 3 and 18 years of age, though cases observed in early adulthood have also been described. A male predominance is commonly seen.

pFL typically is localized to lymph nodes within the cervical region although extranodal sites including the testis, epididymis and gastrointestinal tract do occur. The vast majority of patients present with localized involvement without systemic disease and follow an indolent clinical course.

Histologically, lymph nodes show effacement of normal architecture by a proliferation of expansile, ill-defined follicles with attenuated mantle zones (figure 1). The atypical follicles are comprised of a mixture of intermediate and larger-sized centroblastic lymphocytes with more immature chromatin often lending to an interpretation of higher-grade cytology and aggressive disease. Notably, these morphologic features are often not entirely specific and can show overlap with other lymphomas including pediatric marginal zone lymphoma (Quintanilla-Martinez et al., 2016). By the 2016 WHO classification, diffuse areas suggesting progression or transformation, exclude a diagnosis of pFL. 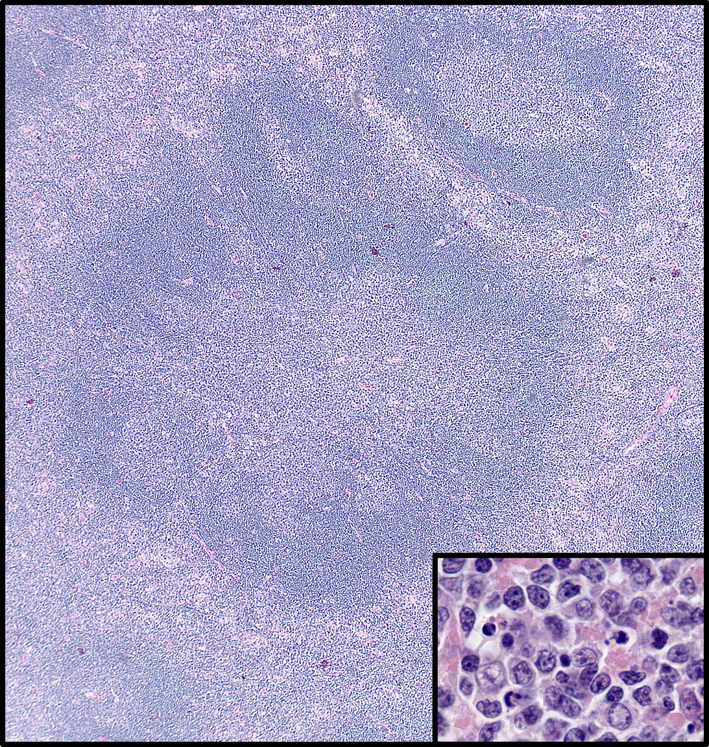 Prognosis is similar to other indolent lymphomas, with excellent progression free and overall survival. The vast majority of patients achieve complete remission and show no evidence of disease following local surgical treatment or radiation therapy.

Recurrent cytogenetic abnormalities are not common in pFL. BCL2, BCL6, and MYC rearrangements are absent. Recurrent deletion or copy number-neutral loss of heterozygosity (LOH) at 1p36 have been described, and these alterations are associated with TNFRSF14 mutations (Martin-Guerrero et al., 2013).

The mutational landscape of pFL is not well understood. TNFRSF14 mutations have been reported in association with, as well as distinct from 1p36 deletion or copy number neutral LOH. Recently, a recurrent somatic variant encoding p.Lys66Arg in the transcription factor interferon regulatory factor 8 (IRF8) was described in 3 of 6 cases of pFL (50%) by whole exome deep sequencing (Ozawa et al., 2016). This point mutation was not observed in adult follicular lymphoma or cases of pediatric marginal zone lymphoma.

Note
While the underlying genetics driving pFL are under investigation, recent studies have suggested at least two potential pathogenic pathways.
Gene name
TNFRSF14 (TNF receptor superfamily member 14)
Location
1p36.32
Note
TNFRSF14 is a member of the TNF (tumor necrosis factor) receptor superfamily. In T-cells it is involved in signal transduction pathways that activate inflammatory and inhibitory immune responses. The role of TNFRSF14 in normal B-cell physiology is unclear, but it is known to be recurrently deleted or show copy number-neutral loss of heterozygosity (LOH) along with somatic point mutations in cases of pFL.
Gene name
IRF8 (interferon regulatory factor 8)
Location
16q24.1
Note
IRF8 is a member of the IRF family of transcription factors contributing to hematopoietic cellular differentiation and development, cell cycle regulation and apoptosis. Variants in this gene have been recently reported in a small percentage of adult follicular lymphomas and pediatric-type follicular lymphomas. In pediatric-type follicular lymphoma the mutations are a specific recurrent mutation, p.Lys66Arg, different from mutations in IRF8 which are seen in adult follicular lymphomas (Ozawa et al., 2016). While currently little is known about the pathogenic role of IRF8 in this setting, the significant portion of pediatric-type follicular lymphomas with the same recurrent nucleotide change is highly suggestive of a critical alteration and potential unique disease origin.