Classification of Hodgkin lymphoma over years

Histologic classification of Hodgkin lymphoma (HL) evolved through different systems, starting from the modern histologic classifications by Jackson and Parker in 1944 and Lukes and Butler in 1966, to the 2008 World Health Organization (WHO) classification. HL has been classified into classical HL, which accounts for 95% of all HL cases, and the less common nodular lymphocyte predominant HL (NLPHL). Classical HL is a distinct neoplastic entity with typical clinical and epidemiological characteristics and unique pathological, genetic, and virological features.

The modern classification scheme of Hodgkin lymphoma (HL) (Lukes, Craver, et al., 1966) is based on the concept that the histologic subtypes represent morphologic patterns of a neoplasm in which rare Hodgkin and Reed-Sternberg (HRS) cells, the HL tumor cells, are embedded in a dominant reactive background. Based on the morphologic characteristics of the HRS cells (lacunar cells, multinucleated giant cells, pseudosarcomatous cells) and the composition of the reactive infiltrate, four histologic subtypes have been distinguished: lymphocyte-rich cHL (LRCHL),nodular sclerosis (NS) cHL, mixed cellularity (MC) cHL, and lymphocyte depletion (LD) cHL. (Stein, 2001; Stein et al., 2008; Swerdlow et al., 2016). The background shows a cellular composition which is characteristic for each histotype. In MC cHL, microenvironmental cell types include T- and B-reactive lymphocytes, eosinophils, granulocytes, histiocytes/macrophages, plasma cells, mast cells. In addition, a great number of fibroblast-like cells and fibrosis are frequently found in NS cHL.
Lymphocyte predominant (LP) HL, is characterized by a lymphocyte- rich background with admixed histiocytes. In 1944 Jackson and Parker called it in as "paragranuloma" to separate it from Hodgkin "granuloma". In 1966 Lukes and Butler (Lukes and Butler JJ, 1966) renamed paragranuloma "lymphocytic and/or histiocytic predominance HD", recognizing a nodular and a diffuse pattern and used the term of lymphocytic and histiocytic (L&H) RS-cell variant for the diagnostic cell (Lukes, Butler et al., 1966), now called LP cell. At the Rye symposium, it was decided to combine the nodular and diffuse types of the Lukes and Butler classification into LPHL (Lukes, Craver et al., 1966) (Table 1).
In the last decades, a considerable body of evidence has indicated that LPHL exhibits features of a B-cell lymphoma, with a characteristic antigen profile and clinical behavior (reviewed in Younes et al., 2014). This led the authors of the REAL classification proposal to separate LPHL as a distinct clinicopathologic entity from the other subtypes of HL, which were grouped under the term "classical HL (CHL) ID: 1569> " (Harris et al.,1994; Mason et al., 1994; Stein, 2001; Stein et al., 2008) (Table 1). According to its cell of origin, phenotype and type of progression to large B-cell lymphoma, NLPHL should probably be considered as a B-cell lymphoma tout court.

HL with a nodular growth pattern and a lymphocyte-rich background encompasses two entities, i.e. NLPHL and LRCHL with distinct phenotypical features. NLPHL which may contain a broad morphologic spectrum of neoplastic cells, exhibit a characteristic immunophenotype with expression of B-cell-specific antigens and absent expression of CD30 and CD15.
LRCHL cases also exhibit, in the majority of cases, a nodular growth pattern as well as a broad morphologic spectrum of the neoplastic cells. The tumor cell phenotype, however, is always characteristic of CHL with expression of CD30 and CD15, infrequent expression of B-cell antigens (Figure 1). Furthermore, it could be shown by means of immunostains that the vast majority of LPHL cases contain areas with nodular growth pattern, whereas purely diffuse cases are extremely rare. Probably these cases, could be classified as grey zone lymphomas because they exhibit intermediate features between NLPHL and THCRLBCL (Figure 1) (Younes et al., 2014).

Patients with LPHL and LRCHL usually differ from patients with NS cHL or MC cHL, as they presented with an earlier disease stage and infrequent mediastinal involvement. As most LPHL cases show a complete or partial nodular growth pattern, their differentiation from THCRLBCL is a rare problem (Table2). 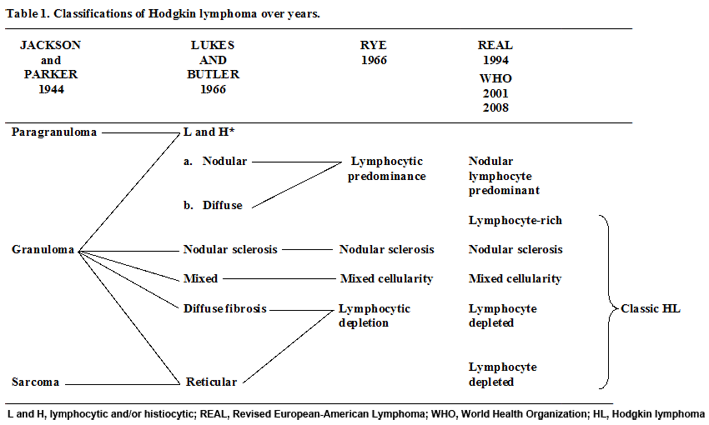 The question of the existence of diffuse LPHL became more complex when other authors described a diffuse large B-cell lymphoma variant, the so-called T-cell or histiocyte-rich large B-cell lymphoma (THCRLBCL), which frequently simulate the morphology of diffuse LPHL but exhibited an aggressive disease course (De Wolf-Peeters et al., 2008; Carbone and Gloghini, 2016a). The cases identified as diffuse LPHL exhibit loosely distributed neoplastic cells embedded in a reactive background without evidence of nodularity .In these cases, which closely resemble THCRLBCL by conventional histology, a majority of the neoplastic cells have the morphologic features of LP cells. Immunophenotypic analysis can disclose an LP cell-characteristic phenotype with expression of CD20, CD79a, and EMA, whereas in-situ hybridization for EBER-transcripts does not provide evidence of a latent EBV infection. Due to the overlapping features between THRLBCL and LPHL, it is sometimes impossible to distinguish these two entities; thus, "grey zone" lymphoma is used to define some of those cases (De Wolf-Peeters et al., 2008; Younes et al., 2014) (Figure 1).
Also, nodular lymphocyte predominant Hodgkin lymphoma (NLPHL) and T-cell/histiocyte rich large B-cell lymphoma (THRLBCL) are closely related: both diseases contain neoplastic cells with similar morphologic and immunophenotypic features but differ with respect to their architecture and the nature of the reactive background (table 2).
An additional type of HL with an abundance of lymphocytes was subsequently recognized. It was termed "lymphocyte-rich (LR) form of classical HL" and included in the REAL classification. This variant of classical HL (CHL), resembles, in terms of nodular growth and lymphocyte-richness, nodular LPHL and, in terms of the immunophenotype of the tumor cells, CHL (Figure 1). Clinically, patients with LPHL and LRCHL show similar disease characteristics at presentation but differ in the frequency of multiple relapses and prognosis after relapse (Gloghini and Carbone, 2016a; Gloghini and Carbone, 2016b).
Table 2. Phenotypic and virologic features of neoplastic cells of classic Hodgkin lymphoma (cHL), nodular lymphocyte predominance Hodgkin lymphoma (NLPHL) and T-cell/histiocyte rich large B-cell lymphoma (THRLBCL).

*Association with EBV is less frequent in NS than in MC cHL and LRCHL. 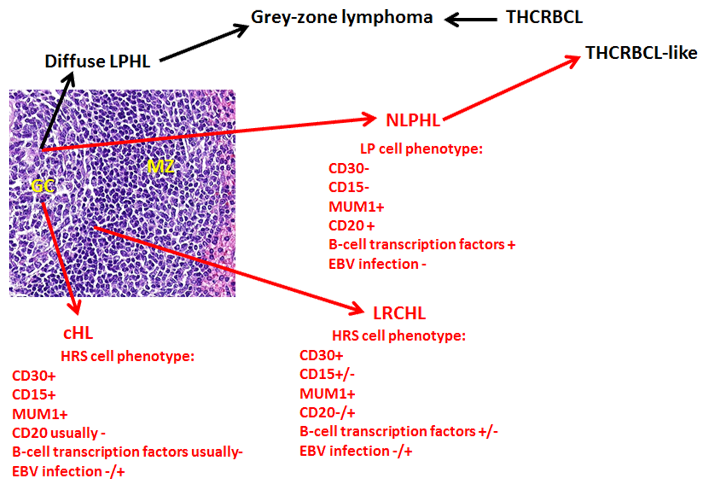 In addition to immunophenotyping, in-situ hybridization for EBER detection can assist in the differential diagnosis between the two HL entities as the neoplastic cells in LPHD appear not to be permissive for an EBV infection (Table 3).
EBV is found in HRS cells preferentially in cases of MC and LD cHL, and less frequently in NS and LRCHL. Notably, EBV is found in HRS cells in nearly all cases of cHL occurring in patients infected with HIV (Younes et al., 2014; Dolcetti et al., 2016; Carbone et al., 2016).
The virologic characteristics of cHL vary according to the immunocompetence status of the host and cHL subtype (Carbone et al., 2016).
Table 3. Morphologic and virologic characteristics of Hodgkin lymphoma.

NLPHL may evolve to a completely diffuse T-cell-rich proliferation lacking any follicular dendritic cells which would be consistent with a THRLBCL or can be associated with such a proliferation at a separate site.
The 2016 revision of WHO classification proposal recommend the designation of these cases as THRLBCL like transformation of NLPHL, with inclusion of the word "like" due to some remaining uncertainties (Figure 1) (Swerdlow et al., 2016).

See the pertinent sections within the CARDS of the Atlas of Genetics and Cytogenetics in Oncology and Haematology describing the general features of NLPHL and cHL (Küppers, 2011; Carbone and Gloghini, 2016b; Gloghini and Carbone, 2016a).

Classification of Hodgkin lymphoma over years