No pseudogene has been reported for PPAR gamma.

There are 3 different PPAR gamma proteins PPAR gamma 1, 2 and 3 which differ at their 5-prime ends, each under the control of its own promoter. PPAR gamma1 and PPAR gamma3, however, give rise to the same protein, encoded by exons 1 through 6, because neither the A1 nor the A2 exons are translated.

The PPAR gamma protein consists of 505 amino acids and has a molecular weight of 57.6 kDa. According to the NCBI conserved domain search, it contains two C4 type zinc finger domains. In nearly all cases, this is the DNA binding domain of a nuclear hormone receptor. In addition it contains a ligand binding domain. This all-helical domain is involved in binding the hormone to these receptors. 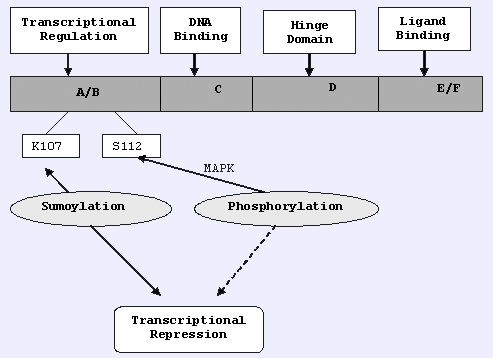 The various domains of PPAR gamma protein with their specific functions. Post transcriptional modifications indicating functional changes have been depicted.

Localized in the nucleus.

Protein-protein interactions PPARs function as heterodimers with retinoid receptor (RXR). The PPAR RXR heterodimer function along with co-activators such as NCOA6, NCOA7 or PPARBP, leading to increases in transcription of target genes. PPAR gamma1 or PPAR gamma 2 in a heterodimer with RXR is capable of forming complexes with oligonucleotides containing peroxisome proliferator response elements (PPREs) usually 5-AACT AGGNCA A AGGTCA-3 in the promoter regions of the target genes. PPAR gamma1 and PPAR gamma2 can also form complexes with RXRB and RXRG. Ligands of PPAR gamma PPAR gamma1 and PPAR gamma2 have ligand-dependent and -independent activation domains. Due to the presence of an additional 28 amino acids at the amino terminus, PPAR gamma2 has a ligand-independent activation domain that is several folds more effective than that of PPAR gamma1. However, in the presence of ligands that can be lipid derivatives, eicosanoids, xenobiotics etc, triggers a conformational change in the protein that results in the recruitment of transcriptional co-activators. In the absence of a ligand, PPAR gamma is bound to transcriptional co-repressors containing nuclear receptor corepressor ( N-CoR ) and can actively silence the transcription of target genes. Phosphorylation of serine 112 at the N terminus of PPAR gamma2 results in a reduction of its transcriptional activity. This phosphorylation further promotes the sumoylation of lysine 107 which then further reduces its transcriptional activity.
The prostaglandin J2 (PGJ2) metabolite l5-deoxy-Delta12,14-PGJ2 binds directly to PPAR gamma and can promotes the differentiation of C3HlOT1/2 fibroblasts to adipocytes. Its principal function came to light when it was found that the anti-diabetic drug thiazolidinediones (TZD) was a PPAR gamma ligand. The TZD series of drugs via their agonist activity on PPAR gamma promotes the uptake of circulating fatty acids into adipocytes. The glucose lowering effects of TZDs are due to increased disposal of glucose into adipose tissues along with increased expression of insulin sensitizing factors (such as adiponectin) and decreased expression of proteins that promote insulin resistance.
PPAR gamma also has an anti-inflammatory role by inhibiting the production of inflammatory cytokines, and other proteins such as TNF-alpha, MMP9 and iNOS from macrophages in the presence of ligands such as TZD. Inhibition of pro-inflammatory transcription factors such as NF-kB, AP-1 and STAT by PPAR gamma is said to be through limited availability of shared co-factors as well as direct protein-protein interactions.

Entity name
Metabolic syndrome
Note
Metabolic syndrome is a very common condition that is associated with an increased risk of cardiovascular disease and type 2 diabetes mellitus. In obese and diabetic rodents thiazolidinediones (TZDs), known to be a potent PPAR gamma ligand, are mostly used to alleviate elevated plasma glucose levels and they are known to be efficacious therapeutic agents for the treatment of noninsulin-dependent diabetes mellitus (NIDDM). TZD derivatives can also increase the insulin sensitivity of target tissues in animal models of NIDDM. The antidiabetic effects of TZDs are thought to be mediated by means of transactivation of PPAR gamma 1 and 2.
A commonly found polymorphism of PPAR gamma, P12A, is associated with decreased risk of type 2 diabetes.
An alternative activation of macrophages has been implicated in the atheroprotective effects of PPAR gamma. PPAR gamma is critical for the formation of a subpopulation of "alternatively activated" macrophages which exert their anti-inflammatory properties via paracrine effects on "classically activated" (M1) macrophages within the atherosclerotic lesion. In addition, oxidized low density lipoproteins (LDL), but not normal LDL, reduce the expression of proinflammatory cytokines in LPS stimulated macrophages presumably through their effect on PPAR gamma.
Entity name
Familial Partial Lipodystrophy Type 3
Note
In a study including patients with hyperinsulinemia and early-onset hypertension, patients have been shown to have dominant-negative mutations in PPAR gamma proteins. The dominant negative effect is characterized with a proline to leucine (P467L) mutation in the PPAR gamma protein. Patients with these mutations showed symptoms of severe peripheral and hepatic insulin resistance, partial lipodystrophy and abnormal functioning of adipose tissue.
Entity name
Breast Cancer
Note
In human primary and metastatic breast cancers it has been shown that there are significant levels of PPAR gamma expression. Cell culture studies have indicated that in the presence of the PPAR gamma ligand TZD, cells have undergone differentiation, lost the malignant phenotype and showed a decrease in the proliferation rate. This was associated with the accumulation of lipids and subsequent change in the expression profile.
Entity name
Prostate Cancer
Note
PPAR gamma expression has been shown in human prostate adenocarcinomas and corresponding cell lines and specific ligands have been found to decrease the proliferation in these cancer cells by indusing PPAR gamma activation. From these data, it has been concluded that PPAR gamma might have a therapeutic potential in prostate cancer by acting as a biological modifier.
Entity name
Colorectal Cancer
Note
Mouse colon treated with PPAR gamma ligands was shown to increase the expression level of beta-catenin protein, In addition, protein-protein interaction was observed between beta-catenin and PPARgamma in cultured cell lines and colonic epithelium in mice. Thus, ligand-activated PPARgamma interacts with beta-catenin, thereby retaining it in the cytosol and reducing beta-catenin/T cell factor transcriptional activity that is required for aberrant crypt foci (ACF) formation. Short-term exposure to dietary PPAR gamma ligands such as linoleic acid and conjugated linoleic acid has been shown to inhibit colon cancer metastasis.
Entity name
Lung cancer
Note
PPAR gamma ligands have been shown to decrease the proliferation of non small cell lung cancer (NSCLC) cell lines and xenograft models. Forced overexpression of PPAR gamma in a NSCLC cell line model inhibited the expression of COX-2 protein and promoter activity, resulting in decreased prostaglandin E2 production. The increased activity of the PTEN homologue caused a decrease in the level of phosphor-AKT and the resulting inhibition of NF-kB was implicated in the inhibition of COX-2 expression.
Entity name
T-Cell Leukaemia
Note
In T-cell leukaemia, the PPAR gamma ligand Prostaglandin D(2) (PGD(2)) which is highly produced in mast cells, platelets, and alveolar macrophages, has antiproliferative effects. On the other hand these prostaglandins have no effect in normal human T cells. Similar actions were observed in the presence of ciglitazone and troglitazone. All of these ligands are thought to be antiapoptotic and exerting their function in a PPAR gamma dependent manner.
Entity name
Pituitary Tumours
Note
PPAR gamma ligands have been shown to induce G0/G1 cell-cycle arrest and apoptosis and suppressed ACTH secretion in human and murine corticotroph tumour cells . In adrenocorticotrophic hormone (ACTH)-secreting pituitary tumours, there is high morbidity associated with excessive glucocorticoid production. The PPAR gamma ligand, rosiglitazone, prevented tumour formation of subcutaneously injected At20 cells secreting ACTH murine corticotroph cells.