The gene is constitutively expressed in all nucleated cells. Under cellular stress conditions (such as hypoxia or glucose starvation) transcritption is upregulated via the "unfolded protein response" (UPR).

The HSPA5 gene is expressed in all nucleated cells, in particular in thyroid-, lung-, smooth muscle-, liver-, and various cells of the immune system. Under cellular stress conditions the gene is over-expressed due to UPR. 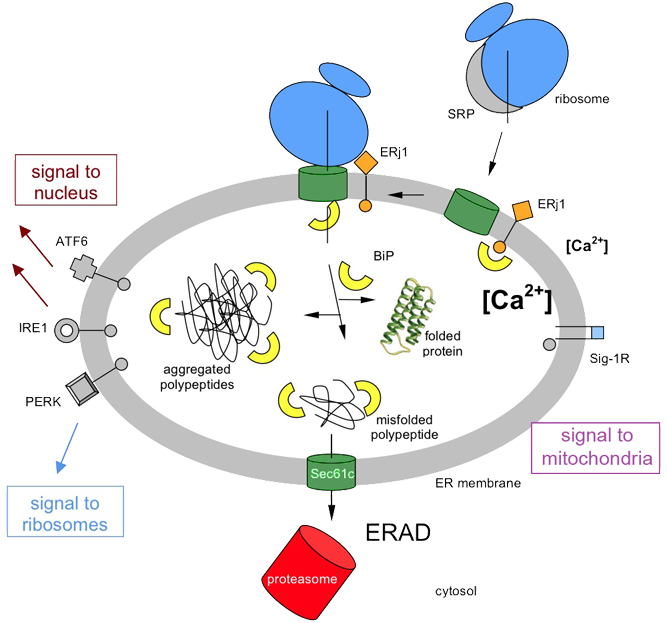 Central role of HspA5/BiP in gene expression and calcium homeostasis. Typically, BiP is involved in protein transport into and in protein folding and assembly in the ER. Upon protein misfolding -either due to mutation in a client protein or to environmental conditions, such as hypoxia or glucose starvation- one or more proteins start to aggregate and therefore, sequester BiP. This removes BiP from its normal tasks as well as from the signaling molecules in the ER membrane (ATF6, IRE1, PERK). Subsequently, the unfolded protein response/UPR is activated and leads to a reduction of global protein synthesis and the over-production of ER chaperones and ERAD components (ERAD, ER associated protein degradation). If this response fails apoptosis is induced.

HspA5/BiP is a resident protein of the endoplasmic reticulum (ER). Typically, it is a soluble protein of the lumen of the ER. However, a subfraction of HspA5/BiP can be found on the cell surface of certain cell types, in particular of cancer cells. 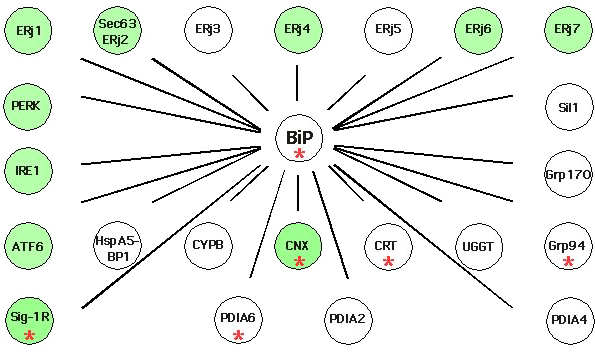 The ER is involved in a variety of essential and interconnected processes, including protein biogenesis (protein transport into the ER, protein folding and assembly, and ER associated protein degradation), signal transduction (unfolded protein response/UPR), and calcium homeostasis. The central player in all these processes is the molecular chaperone HspA5/BiP. HspA5/BiP crucially depends on a number of interaction partners, including co-chaperones (ERj1 through ERj7), nucleotide exchange factors (Sil1, Grp170), other chaperones (calnexin, calreticulin, Grp94, UGGT), folding catalysts (protein disulfide isomerases/PDI, and peptidyl prolyl cis/trans isomerases such as Cyclophilin B) and signaling molecules (IRE1, ATF6, PERK, Sigma-1 receptor).
As a typical Hsp70, HspA5/BiP comprises an aminoterminal nucleotide binding domain and a carboxyterminal substrate (poly)peptide binding domain. Its functional cycle involves an ATP-form with low affinity for substrate (poly)peptides and an ADP-form with high substrate affinity and is regulated by Hsp40-type co-chaperones and nucleotide exchange factors.
Molecular chaperones of the Hsp70 type family reversibly bind to substrate polypeptides via the substrate binding domain (SBD). Typically, Hsp70 substrates are hydrophobic oligopeptides within more or less unfolded polypeptides. The binding of a substrate to the SBD inhibits unproductive interactions of the polypeptide and favors productive folding and assembly that occur concomitant with release from Hsp70. In addition, Hsp70s can regulate the activities of folded polypeptides. 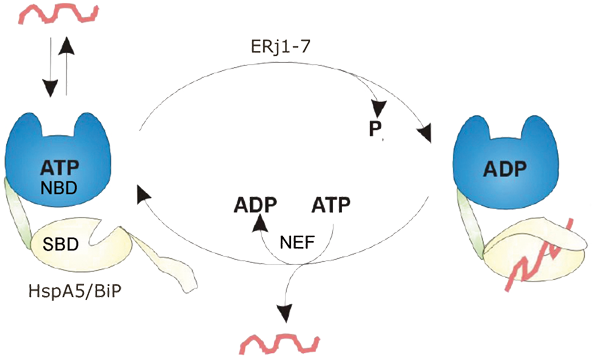 Entity name
Various cancers such as astrocytoma, breast cancer, glioblastoma, liver cancer, lung cancer, and prostate cancer
Note
HspA5/BiP has been linked to various cancers. Due to poor vascularization and the resulting hypoxia and glucose starvation, tumor cells are prone to ER stress and therefore, UPR. In cultured cells, HspA5/BiP is one of the proteins involved in protecting cancer cells against ER stress-induced apoptosis.
Disease
HSPA5/BIP expression is highly upregulated in a variety of cancer tissues due to UPR. The HspA5/BiP protects cancer cells against apoptosis through various mechanisms : i) it fights protein aggegation in the ER, ii) due to its ability to bind Ca2+ it prevents calcium signaling in the cytosol, iii) it prevents the activation of pro-apoptotic components, such as BIK, BAX, pro-caspase 7 and pro-caspase 12. Furthermore, HspA5/BiP protects cancer cells against various chemotherapeutic agents that target the same pro-apoptotic components.
Entity name
Haemolytic uraemic syndrome (HUS)
Note
HspA5/BiP has been linked to a group of infectious diseases that are caused by Shigella toxin producing E. coli (such as HUS).
Disease
Shiga toxigenic Escherichia coli (STEC) strains cause morbidity and mortality. Some of these pathogens produce Shiga toxin and AB5 toxin and are responsible for gastrointestinal diseases, such as HUS. During an infection, the bacterial cytotoxin enters human cells by endocytosis and retrograde transport to the ER. In the ER, BiP is the major target of the catalytic A-subunit, which inactivates BiP by limited proteolysis. Finally, all BiP functions are completely lost, and the affected cells die.
Entity name
Marinesco-Sjogren syndrome (MSS)
Note
HspA5/BiP has indirectly been linked to a hereditary disease that is caused by a lack of function of the nucleotide exchange factor of BiP, termed Sil1.