DNA structure of the MERTK gene aligned with the corresponding functional protein domains. The open ended boxes for exons 1 and 19 indicate untranslated regions which are not depicted here.

Tissue analysis of MERTK expression has demonstrated a 4.4 kilobase message in a spectrum of tissues including the testis, ovary, prostate, lung, kidney, spleen, placenta, thymus, small intestine, colon, and liver. A larger transcript (approximately 5.5 to 6.5 kilobase message) has been detected in testis and ovary. A potential alternatively spliced transcript is generated by the insertion of a novel exon between exons 7 and exon 8. This alternative transcript may encode a soluble MERTK (Graham et al., 1994). 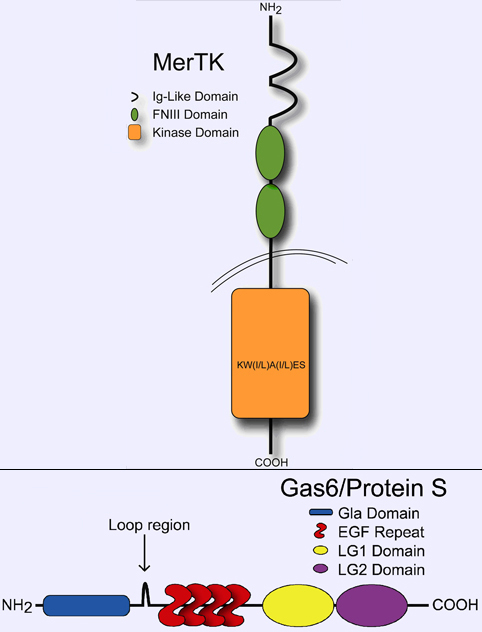 The diagram above depicts the domain structure of the Mer receptor tyrosine kinase protein. The conserved sequence within the kinase domain is depicted. The diagram below depicts the domain structure of the ligands, Gas6 and Protein S. Gas6 and Protein S have the same domain structure with the exception of thrombin cleavage sites which are present in the loop region of Protein S but not Gas6. Vitamin-K dependent carboxylation of the Gamma-carboxyglutamic acid (Gla) domain is required for biologic activity of these ligands. The crystal structure of a Gas6/Axl complex suggests that the laminin G-like (LG) domains mediate binding to the Ig-like domains of MERTK.

The MERTK receptor is synthesized as a protein containing 999 amino acids. Although the predicted molecular weight of MERTK is approximately 110 kD, the extracellular domain of MERTK possesses sites for NH2-linked glycosylation and the mature, fully glycosylated form of MERTK is approximately 205 kD (Sather et al., 2007). Depending on the cell type, underglycosylated forms of MERTK protein may also be produced leading to a range in MERTK protein sizes from 160 to 205 kD. The extracellular component of the MERTK receptor encodes two Ig domains (aa 112-186 for domain 1 and aa 197-280 for domain 2) and two FNIII domains (aa 284-378 for domain 1 and 386-478 for domain 2). The two Ig domains and two FNIII domains define MERTK as part of a family of receptor tyrosine kinases (RTKs) which contains only two other members, AXL and Tyro-3. Together, Tyro-3, Axl, and Mer constitute the TAM family of receptor tyrosine kinases (Linger et al., 2008). The extracellular domain of MERTK serves as the ligand binding region for the ligands GAS6 (Chen et al., 1997) and Protein S (Prasad et al., 2006). Specifically, Gas6 has been shown to bind TAM receptors in the immunologlobulin domains (Sasaki et al., 2006).
The intracellular component of the MERTK receptor includes the tyrosine kinase domain (aa 600-848). Within this tyrosine kinase domain is a signature motif, KWIAIES, which is only found in the TAM receptor tyrosine kinases (Graham et al., 1994). Following ligand binding to the extracellular domain, MERTK receptor dimerization and tyrosine autophosphorylation occurs. Three tyrosine residues (Y749, Y753, and Y754) within the activation loop of the kinase domain have been identified as the primary sites of autophosphorylation (Ling et al., 1996). These three residues are also conserved in the same sequence context in Axl and Tyro-3. Another residue within the kinase domain, Y872, is part of consensus GRB2 binding site, YXNX, and the corresponding sequence in murine MERTK has been shown to bind Grb2, recruit and activate PI3K as well as transcriptionally activate NF-kB (Georgescu et al., 1999). Phosphorylation and activation of PLCgamma may occur through direct binding of one of its SH2 domains to endogenous phospho-MERTK (Sen et al., 2007). Similarly, there is evidence that PI3K may interact with MERTK via a SH2 domain (Sen et al., 2007). Finally, VAV1 has been shown to constitutively interact with MERTK, and the release of VAV1 upon ligand-dependent MERTK activation leads to activation of Rho family members (Mahajan et al., 2003).
The extracellular domain of MERTK is also constitutively shed via cleavage due to a metalloproteinase. The resulting soluble MERTK consists of both Ig domains and both FNIII domains, and is believed to function as a decoy receptor for MERTK ligands (Sather et al., 2007).

The activation of MERTK and downstream signaling via PI3K/Akt, PLCGamma, VAV1, and MAPK/ERK are thought to mediate MERTKs cellular functions in cell survival, proinflammatory cytokine production, and actin reorganization/cell migration. Overexpression or ectopic expression of MERTK has been implicated in oncogenesis (Linger et al., 2008).

The two Ig domains and two FNIII domains are shared with Axl and Tyro-3, the other two members of the TAM RTK family. The protein sequences of TAM receptors are 31-36% identical (52-57% similar) in the extracellular regions. The intracellular domains share 54-59% sequence identity (72-75% similarity) with higher homology in the tyrosine kinase domain (Graham et al., 1995).

Germline mutations in the second exon of MERTK are well characterized and lead to retinitis pigmentosa and retinal dystrophy. The first description of this mutation was in the Royal College of Surgeon (RCS) rat and details a deletion that leads to a frameshift and early translation termination codon, resulting in an aberrant non-functional protein product (DCruz et al., 2000). A similar retinal dystrophy phenotype is found in the merkd mouse, which contains a targeted disruption of the MERTK gene (Duncan et al., 2003). In humans several different mutations that affect the MERTK region have been described in individuals suffering from retinal dystrophy.

Entity name
Retinitis pigmentosa and retinal dystrophy
Disease
Retinitis pigementosa is a disorder that affects 1 in 3500 people and stems from loss of functional photoreceptor cells in the retina, and eventual visual loss. Loss of functional MERTK protein leads to ineffective phagocytosis and clearance of apoptotic cells, with resultant buildup of the retinal pigmented epithelium leading to visual loss and is one known genetic cause of retinal dystrophy (Shuster et al., 1990; Gal et al., 2000; Tada et al., 2006; Tschernutter et al., 2006).
Entity name
Malignancy
Disease
MERTK and its family members have been implicated in a number of malignant conditions. MERTK is not expressed on the normal lymphocytes but has been found to be expressed in a majority of lymphoblasts from patients with T-cell leukemia, certain subsets of B-cell leukemia, and mantle cell lymphoma (Yeoh et al., 2002; Graham et al., 2006). Forced overexpression of MERTK in a murine model leads to T-cell leukemia and lymphoma (Keating et al., 2006). MERTK has also been associated with a variety of other non-hematologic malignancies including: glioblastoma multiforme (Ling et al., 1995), gastric cancer (Wu et al., 2002), and prostate cancer (Mahajan et al., 2005). MERTK is known to play a role in several oncogenic mechanisms, including angiogenesis, migration and invasion, and cell survival signaling as reviewed in Linger et al (2008).
Entity name
Autoimmune Disease
Disease
Animal models that lack functional MERTK protein have macrophages that are unable to appropriately engulf apoptotic cells. This inefficient clearance of dead cells can lead to activation of inflammation and development of autoimmunity (Scott et al., 2001). This mechanism has been suggested for systemic lupus erythematosis, but no human cases have been reported.