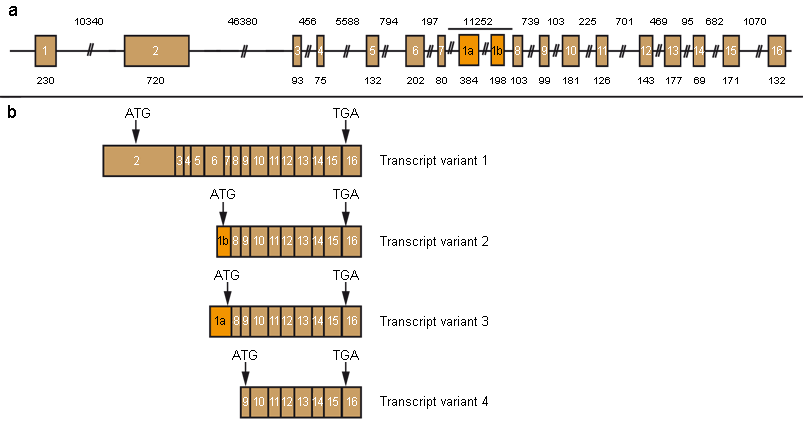 (a) Schematic representation of the genomic organization of human PIK3R1. Exons are depicted as boxes. The length (bp) of introns and exons is shown (top and bottom respectively). (b) PIK3R1 undergoes alternative splicing to produce four major transcript variants. The exons that comprise each transcript are indicated, relative to the genomic organization illustrated in panel (a).

Regulation of PI3K signaling by p85α: p85α is the regulatory subunit of PI3K. In quiescent cells, p85α binds to p110α, the catalytic subunit of PI3K, and both stabilizes p110α and inhibits the basal activity of p110α. Ligand-induced phosphorylation of receptor tyrosine kinases or adaptor proteins on tyrosine residues, within a pYXXM motif, facilitates the binding of p85α to the phosphotyrosine residues via its SH2 domains. Consequently, the inhibitory effect of p85α on p110α is relieved and PI3K is brought into the vicinity of the plasma membrane where it catalyzes the conversion of phosphatidylinositol-4,5-bisphosphate (PIP2) to phosphatidylinositol-3,4,5-trisphosphate (PIP3). PIP3 in turn recruits the AKT (v-akt murine thymoma viral oncogene homolog) serine-threonine kinase and the PDK1 (phosphoinositide-dependent protein kinase 1) kinase to the plasma membrane, thus facilitating the phosphorylation and activation of AKT. Once activated, AKT can initiate several downstream signal transduction cascades that regulate protein synthesis, cell survival, cell growth and metabolism, and the cell cycle (Reviewed in Vanhaesebroeck et al., 2010).
Under conditions of nutrient deprivation, p85α is phosphorylated by IKK on serine-690. Consequently, the ability of p85α to bind phosphotyrosine proteins is reduced and PI3K-AKT signaling is diminished (Comb et al., 2012). Similarly, the activation of PKC family members by phorbol ester stimulation results in phosphorylation of p85α on serine-361 and serine-652, and leads to reduced binding of p85α to phosphotyrosines and inhibition of PI3K-AKT signaling (Lee et al., 2011).

Receptor trafficking: p85α has GAP (GTP-ase Activating Protein) activity towards the Rab4, Rab5, Rac1, and Cdc42 small GTPases and, to a lesser extent, towards the Rab6 GTPase. The GAP activity of p85α resides within the BH domain. Within the BH domain, Arg151 and Arg274 are important for maximal GAP activity of p85α. The regulation of Rab4 and Rab5 activity by p85α has been implicated in the endosomal trafficking of activated PDGFR; cells expressing a synthetic mutant (p85α-Arg274A) exhibited delayed degradation of activated PDGFR, prolonged activation of the MAPK and AKT signalling pathways, and the capacity to transform NIH 3T3 cells (Chamberlain et al., 2004; Chamberlain et al., 2008; Chamberlain et al., 2010). 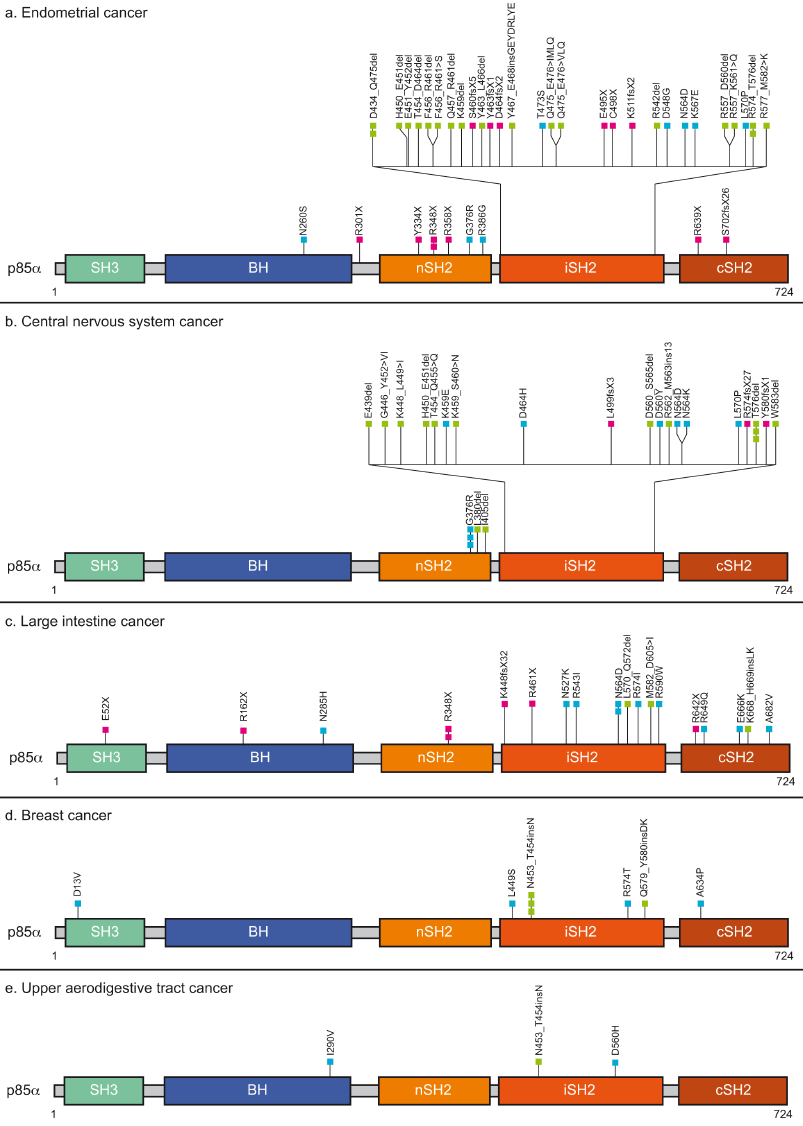 Distribution of somatic mutations in PIK3R1 relative to the functional domains of p85α. Mutation data are displayed by cancer site, and were obtained from the Catalogue of Somatic Mutations in Cancer (COSMIC v59 release, May 23rd 2012) (Forbes et al., 2010). Each square represents a single mutation. Nonsense mutations and frameshift mutations (pink squares) are distinguished from missense mutations (turquoise squares) and in-frame insertions/deletions (green squares).

A germline mutation in exon 6 of PIK3R1 has been described in a patient with agammaglobulinemia and an absence of B lineage cells (Conley et al., 2012). The mutation (p85α-W298X) resulted in loss of p85α expression, but did not affect p55α or p50α. The patient was homozygous for the mutation; her parents were both heterozygous carriers.

- Dysregulation of PTEN stability: Cheung et al., (2011) showed that the p85α-E160X mutant, which was present in an endometrial tumor and truncates p85α within the BH domain, is associated with reduced stability of the PTEN protein.