In humans, PTPN1, the gene coding for PTP-1B, is located on human chromosome 20q13. The 10 exons of the gene span more than 74 kb of genomic DNA, in the centromere-to-telomere orientation. The promoter region of PTPN1 gene contains no TATA box, but multiple GC rich sequences in which a number of consensus SP-1 binding sites are present (Forsell et al., 2000).

No human pseudogene for PTPN1 has been identified.

Belongs to the protein-tyrosine phosphatase family. Non-receptor class 1 subfamily; IUBMB enzyme nomenclature: EC 3.1.3.48.
PTP1B (P18031 in UniProtKB) has an N-terminal catalytic phosphatase domain (residues 1-300) followed by a regulatory region of about 80-100 residues and a membrane localization domain (residues 400-435) that tethers the enzyme to the cytoplasmic face of the endoplasmic reticulum (ER). The enzymatic activity is tightly controlled by means of four described mechanisms: oxidation, phosphorylation, SUMOylation, and proteolysis. PTP1B activity is regulated in vivo by reversible oxidation involving Cys 215 at its active site and SUMOylation at two lysines (i.e., 335 and 347). Serine or tyrosine phosphorylation can affect protein interactions (Yip et al., 2010).

Entity name
Various diseases and cancers
Note
PTP1B is involved in direct/enzymatic or indirect interactions with several proteins. In the figure, the PTPN1/PTP1B human interactome is drawn. Each protein is depicted as circle whose color refers to the human pathology where the interaction with PTP1B is found misregulated. The numbers refer to the PMID of the articles supporting the interaction data. 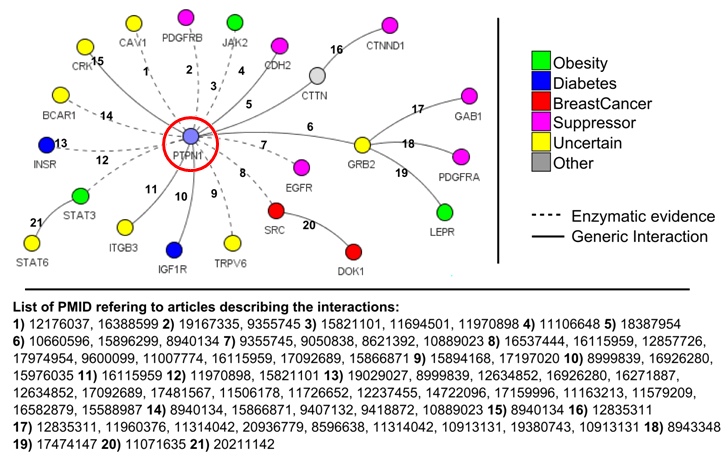