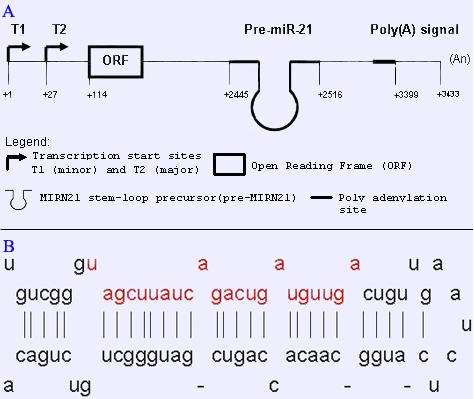 A: Characterization of the full-length about 3433 nt pri-MIRN21.
Open Reading frame analysis within the 3433 nucleotides identified a potential 124 amino acids long peptide. This uncharacterized ORF is located near the transcription start site (+114).
This potential peptide sequence shows homology to a 180-amino-acid human protein. However, it is not clear yet if pri-MIRN21 functions as an mRNA as well.
B: Stem-loop structure of MIRN21.

The gene is located in an intergenic region. The length of MIRN21 gene is reported as 3433 nucleotides long. It overlaps with the 3 UTR end of the Transmembrane Protein 49 (TMEM 49) (also known as Human Vacuole Membrane Protein 1, VMP-1).

RNA Pol II is suggested to be the most likely enzyme involved in miRNA transcription. However, current studies also provide evidences for RNA Pol III dependent transcription of few miRNAs interspersed among repetitive Alu elements.
For MIRN21, the major RNA polymerase is likely to be RNA Pol II due to the presence of 5 cap and 3 poly (A) tail of the pri-MIRN21. Chromatin immunoprecipitation (ChIP) analysis of upstream sequences of MIRN21 showed enrichment for Pol II but not Pol III.
MIRN21 gene was shown to harbor a 5 promoter element. 1008 bp DNA fragment for MIRN21 gene was cloned (-959 to +49 relative to T1 transcription site, see Figure 1; A). Analysis of the sequence showed a candidate "CCAAT" box transcription control element located approximately about 200 nt upstream of the T1 site. T1 transcription site was found to be located in a sequence similar to "TATA" box (ATAAACCAAGGCTCTTACCATAGCTG). To test the activity of the element, about 1kb DNA fragment was inserted into the 5 end of firefly luciferase indicator gene and transfected into 293T cells. The sense orientation insert, unlike antisense, induced luciferase activity.
pri-MIRN21 gene was reported to have two transcription sites, T1 and T2. T1 (identified by RACE, +1 start site) was reported as the minor transcription site and T2 (identified by RACE, +27 start site) as the major transcription start site. Based on the data of pmiR-21-luc expression plasmid, the endogenous pri-MIRN21 was suggested to utilize T1 and T2 sites for initiation of transcription (Figure 1; A).

Pri-miRNA
The miRNA genes are first transcribed in nucleus as long primary transcripts called pri-miRNA. The primary transcript for MIRN21 is found to be 3433-nt long.
For localization of the pri-MIRN21 transcript, total, nuclear and cytoplasmic RNA fractions from HeLa cells were oligo-dT primed and reverse transcribed into cDNA. pri-MIRN21 transcript was found mainly in the nucleus as well as modest levels in the cytoplasm.
Sequence: NCBI cDNA clone: BC053563.
Length: 3389bp

Pre-miRNA
The primary transcripts of microRNAs are processed by enzymatic microprocessor Drosha (RNase III enzyme) and DGCR8 (dsRNA binding protein) from their 3 and 5 cleavage sites into an intermediate stem-loop precursor or pre-miRNA in the nucleus.
The precursor of MIRN21 is 72 bases long (pre-MIRN21), forms a secondary structure, and contains the mature miRNA sequence, stem and terminal loop structures with 2-nt 3overhang (Figure 1; B). The precursor is then transferred from nucleus to cytoplasm by the enzyme Exportin 5. In cytoplasm, a second RNase III enzyme, Dicer, removes terminal loop generating about 20-bp RNA duplex.
Length: 72 bases
Sequence: UGUCGGGUAGCUUAUCAGACUGAUGUUGACUGUUGAAUCUCAUGGCAACACCAGUCGAUGGGCUGUCUGACA (Figure 1; B).

Mature MIRN21
The mature miRNA forms one strand of the RNA duplex. One strand is degraded and other is incorporated in to a protein complex, RNA induced silencing complex (RISC), targeting a partially complementary target mRNA.
MIRN21 is 22 nucleotides long.
Sequence: UAGCUUAUCAGACUGAUGUUGA .

miRNAs are not translated into amino acids.

In HCT-15 colon cancer cell line, pri-MIRN21 showed a A+29G (A/G) heterozygous variation (Figure 2).
It was suggested that sequence variations in pri-miRNAs may cause structural alterations. However, the variation was not found to be affecting pri-MIRN21 processing when it was compared to the wild type.