Alternative splicing (see Figure 1): exon 1 of isoform I is truncated in isoform II (136 bases missing), and preceeded by another exon in 5 (81 bases); exon 8 of isoform I (111 bases) is missing in isoform II, according to Ensembl.

Figure 2: The domains of STRN. Isoform I is shown; amino acids are numbered according to Swiss-Prot description.

Found in the cytosol, and also found associated with membranes.

Striatin, like other striatin family members, binds many proteins, and forms multi-protein complexes. Striatin family members are scaffolding proteins involved in signaling and trafficking in a Ca2+ dependant manner, exhibiting a dual role in endocytic process and signaling.
- Relation with caveolins: striatin directly binds caveolin-1 (Gaillard et al., 2001), a palmitoylated protein involved in caveolae and lipid rafts. Caveolins are scaffolding proteins, the main components of caveolae. Caveolae start as plasma membrane pits and form vesicles in the cytoplasm. Caveolae represent one mode of endocytosis (a clathrin independent mode of endocytosis). Caveolins also have the capacity to bind cholesterol, and are involved in signal transduction processes by directly interacting with a great number of signaling proteins such as nitric oxide synthases, G-proteins, protein tyrosine kinases, and H-Ras (Krajewska et al., 2004). Caveolin-1 is concentrated within dendritic spines of synapses in activity.
- Role in synaptic transmission: striatin down regulation in embryonic motoneurones results in the arrest of dendritic growth, but not in axon growth impairement (Bartoli et al., 1999).
Members of the striatin family have been shown to interact with phocein, a protein involved in clathrin- and dynamin-dependent membrane dynamics (Baillat et al., 2001, Haeberle et al., 2006). Phocein has been implicated in vesicular trafficking, acting in particular in the endocytic process in Purkinje cell dendritic spines (Bailly et al., 2007).
The coiled-coil domain of the striatin family members seems crucial for homo- and hetero-oligomerization of these proteins. Striatin family members are often co-expressed in the neurons. The coiled-coil domain also plays an essential role in the targeting of STRN3 within spines (Gaillard et al., 2006).
- Role in the "non-genomic" estrogen-mediated activation of downstream signaling pathways: in vascular endothelial cells, estrogen receptor (ER) alpha is targeted by striatin (or by STRN3, there is a controversy in this) to a module in membrane caveolae that enables estrogen to activate the mitogen-activated protein kinase (MAPK) and phosphatidylinositol 3 (PI3K)-Akt kinase pathways, and endothelial NO synthase (eNOS). Striatin (or STRN3) directly binds ER alpha and anchors ER alpha to the membrane and organizes the ER alpha-eNOS membrane signaling complex (Lu et al., 2004) (Note: estrogens also act in a "genomic manner", as transcrition factors, regulating gene expression).
- Cell lines: In NIH3T3 cells, striatin and STRN3 form stable complexes with protein phosphatase 2A (PP2A), a multifunctional serine/threonine phosphatase, critical to many cellular processes (Moreno et al., 2000), including presence in the b-catenin degradation complex, leading to degradation of b-catenin and inhibition of Wnt signaling, but also F-actin binding and regulation and aPKC (a member of the Par complex) regulation.
In HEK293Tcells, striatin binds APC (Breitman et al., 2008). APC is a a multi-function protein e.g.: negative WNT signaling pathway regulation, preventing transcription of Wnt target genes; modulation of the actin cytoskeleton and influence on cell adhesion and cell motility, binding to microtubules inducing stabilization of their ends; interaction with the disks large homologs, which are scaffolding proteins. The APC armadillo repeat domain binds the WD-repeats of striatin and both proteins co-localize at epithelial cell to cell junctions and seem to play a role in junctional organization, since their depletion resulted in a F-actin network fragmentation.
- Neurones and epithelial cells: it may be possible that Striatin and APC (and perhaps PP2A) are involved in the Par complex (PAR-3, PAR-6 and aPKC), a protein complex crucial for neurite, as well as for epithelial cell, polarization (Breitman et al., 2008).

Entity name
t(2;4)(p22;q12) in myeloproliferative disease with eosinophilia --> STRN - PDGFRA hybrid gene.
Fusion protein
The N-term STRN - C-term PDGFRA fusion protein retains the caveolin-binding domain, the coiled-coil domain, and the calmodulin-binding domain, but not the WD-repeats of STRN, fused to a truncated WW-like domain and the kinase domain of PDGFRA; the coiled-coil domain from STRN may act as a dimerization motif that could constitutively activate PDGFRA tyrosine kinase. 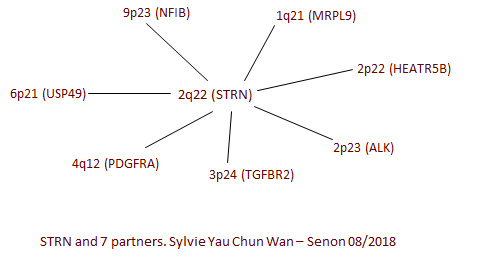