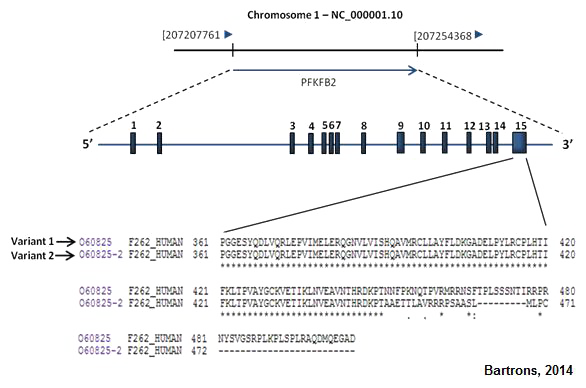 Figure 2. Schematic representation of the location of PFKFB2 gene in chromosome 1 and its structural organization. Description of the exon/intron splice junctions. Exon sequences are shown in vertical bars numbered 1-15. The sequences of 060825 and 060825-2 correspond to variant 1 and variant 2, respectively (NCBI).

The human PFKFB2 is composed of 15 exons spanning 22617 bp (GenBank: AJ005577.1). This gene has 9 transcripts; two of them have been reported to codify a protein and three contain an open reading frame, but no protein has been identified. The transcripts are derived from different promoters and vary only in non-coding sequences at the 5 end. Therefore, the resulting proteins differ in their C-terminal amino acid sequence (Heine-Suñer et al., 1998). The main products of the gene correspond to mRNAs of 7073 bp and 3529 bp for the variant 1 (isoform a; NM_006212.2) and variant 2 (isoform b; NM_001018053.1), respectively (Fig. 2). The isoform b differs in the 3 UTR and the coding region compared to isoform a. The resulting isoform b is shorter and has a distinct C-terminus compared to isoform a. However, it is not known how these different 5 ends are related to the three mRNAs (H1, H2 and H4) that encode the isoform a or the H3 mRNA that encodes the isoform b. None of these mRNAs are strictly heart-specific.
The overall gene structure of the human PFKFB2 gene has exons clustered into three groups. The first group contains exons 1 and 2 that are different from those in other PFKFB2 genes and contain the ATG initiation codon in exon 2. The second group contains exons 3-8 coding for the PFK-2 domain and the third group contains exons 8-15 coding for the FBPase-2 domain and a carboxy-terminal regulatory domain. Gene structure, exon-intron organization, as well as intron sizes, are similar to those of the rat and bovine homologous genes.

The human PFKFB2 coding sequence consists of 1518 bp for isoform a and 1416 bp for isoform b from the start codon to the stop codon, although the immature transcript forms contain 7904 bp and 3494 bp, respectively. Multiple alternatively spliced transcript variants have been described for this gene (Ensembl: OTTHUMG00000036033).

No pseudogene of PFKFB2 is known.

PFKFB2 is a homodimeric protein of 505 amino acids for isoform a and 471 for isoform b with a deduced molecular mass of 58 kDa and 54 kDa, respectively.
PFKFB2 is an enzyme of PFKFB family, as it shares different structure and function with the others isoenzymes. PFKFB2 has two distinct catalytic sites in each subunit: one for the 6-phosphofruto-2-kinase (PFK-2) activity and the other for the fructose-2,6-bisphosphatase (FBPase-2) activity (El-Maghrabi et al., 1982; Pilkis et al., 1995; Okar et al., 2001). The sequence of the catalytic core is highly conserved, whereas the N-terminal and C-terminal regions show more divergence (Rider et al., 2004).
PFK-2/FBPase-2 activities control fructose-2,6-bisphosphate (Fru-2,6-P2) synthesis and degradation, regulating the rate of glucose metabolism. More information about PFKFB2 protein can be found in Uniprot O60825.

PFKFB2 protein is expressed mainly in heart, although expression is also found in other tissues at lesser extent (Minchenko et al., 2002). Moreover, it is expressed in different cancer cell lines such as T-lymph Jurkat, K562 erythroleukemia, liver HepG2, lung A549, colon RKO, bone U2OS, brain GAMG, prostate LnCap, cervix HeLa and breast MCF7. All this information can be found in GeneCards (sections proteins and expression).
According to the RNAseq database, this gene can also be expressed in thyroid, brain, kidney, skeletal muscle, ovary, testis and others.

PFKFB2 protein is active in the cytosol. 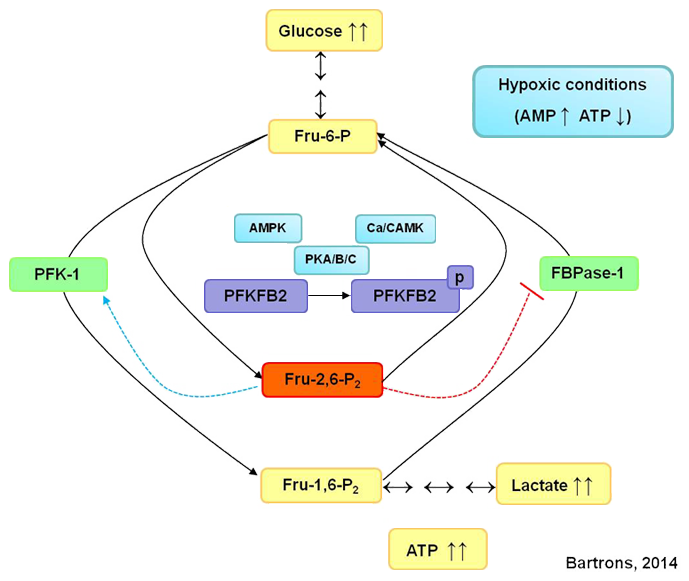 Figure 3. PFKFB2 activities and function in the glycolytic pathway in heart during hypoxia.

This enzyme regulates the concentration of Fru-2,6-P2 through the two catalytic domains. PFK-2 domain catalyzes the synthesis of Fru-2,6-P2, using fructose-6-phosphate (Fru-6-P) and adenosine-5-triphosphate (ATP) as substrates; FBPase-2 domain catalyzes the degradation of Fru-2,6-P2 into Fru-6-P and inorganic phosphate (Pi). These two mutually opposing catalytic activities are controlled by different mechanisms such that each activity is predominant in a given physiological condition. In detail, the reactions catalyzed are:
Kinase catalytic activity: ATP + D-fructose-6-phosphate ⇔ ADP + beta-D-fructose-2,6-bisphosphate
Phosphatase catalytic activity: Beta-D-fructose-2,6-bisphosphate + H2O ⇔ D-fructose-6-phosphate + phosphate
The rate of glycolytic flux is controlled at different levels and by different mechanisms: substrate availability, enzyme concentrations, allosteric effectors and covalent modifications on regulatory enzymes. One of the critically modulated steps is that catalyzed by 6-phosphofructo-1-kinase (PFK-1), in which Fru-2,6-P2 is the most powerful allosteric activator (Van Schaftingen, 1987; Okar and Lange, 1999; Rider et al., 2004). Fru-2,6-P2 relieves ATP inhibition and acts synergistically with adenosine monophosphate (AMP), inhibiting fructose 1,6-bisphosphatase (Fru-1,6-Pase) (Van Schaftingen, 1987). These properties confer to this metabolite a key role in the control of Fru-6-P/Fru-1,6-P2 substrate cycle and hence critically regulates carbohydrate metabolism (Fig. 3).
In vertebrates, there are four different PFKFB genes (PFKFB1, PFKFB2, PFKFB3 and PFKFB4), which encode the PFK-2/FBPase-2 isoenzymes. Each of these enzymes has been originally identified in different mammalian tissues: PFKFB1 in liver and skeletal muscle, PFKFB2 in heart, PFKFB3 in brain, adipose tissue and proliferating cells, and PFKFB4 in testis (Okar et al., 2004; Rider et al., 2004). However, all four are widely expressed throughout the adult organism. These isoenzymes show differences in their distribution and kinetic properties in response to allosteric effectors, hormonal, and growth factors signals (Okar et al., 2001). PFKFB2 enzyme is overexpressed in different cancer cells like melanoma, prostate, pancreatic, gastric and mammary gland cells (Minchenko et al., 2005a; Minchenko et al., 2005b; Bobarykina et al., 2006). For more information about PFKFB genes see: PFKFB3 (6-phosphofructo-2-kinase/fructose-2,6-biphosphatase 3) and PFKFB4 (6-phosphofructo-2-kinase/fructose-2,6-biphosphatase 4).

Chromosomal rearrangements: copy number variants
There are three alterations affecting PFKFB2 genome region described in patients. One of them, the gain of 1:195266734-216326885, shows phenotypic effects such us visual impairment, low-set ears, iris coloboma, intellectual disability, defect in the atrial septum, ventricular septal defect and vertical nystagmus. For more information see DECIPHER.
No syndrome or disease was found in OMIM database. 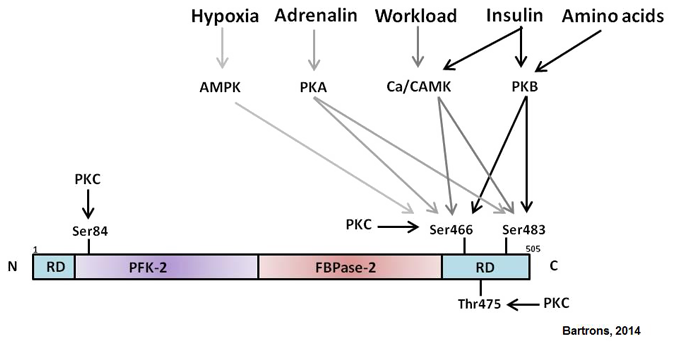 Location in the mouse: chromosome 1, 56,89 cM, cytoband E4, 130689043-130729253 bp, complement strand (MGI).
For a comparison of the gene from Homo sapiens, mouse, rat, cattle, chimpanzee, chicken, zebrafish, rhesus macaque and dog see MGI.
Also for all species known gene tree, see Treefam database.
It appears that the use of Fru-2,6-P2 as a regulatory metabolite is a specifically eukaryotic phenomenon. The most plausible hypothesis for the origin of the PFK-2/FBPase-2 would be the fusion of two ancestral genes coding for a kinase functional unit and a phosphohydrolase/mutase unit, respectively. From protein sequence alignments, it is clear that the bisphosphatase activity located in the C-terminal domain of the PFK-2/FBPase-2, the phosphoglycerate mutases (PGAMs) and the acid phosphatase family diverged from a common ancestor (Jedrzejas, 2000; Okar et al., 2001). Alignments of the bisphosphatase domain with PGM and acid phosphatase can be obtained at EBI. On the other hand, PFK-2 domain is related to a superfamily of mononucleotide binding proteins including adenylate kinase (AK) of E. coli., p21 Ras, EF-tu, the mitochondrial ATPase- β-subunits and myosin ATPase, all of them contain the Walker A and B motifs and have a similar fold (Rider et al., 2004).

Orthologs (from BLAST Local Alignment Tool)
Results from BLAST Local Alignment Tool are shown in Figure 5. Only the annotated proteins are reported, the predicted proteins appearing in the local alignment were excluded.
Comparison of the PFKFB2 cDNA sequence with the bovine and rat 6-phosphofructo-2-kinase/fructose-2,6-bisphosphatase (PFK-2/FBPase-2) heart isoforms shows 87-90% nucleotide and 92-95% amino acid identity (Sakata and Uyeda, 1990; Darville et al., 1991). 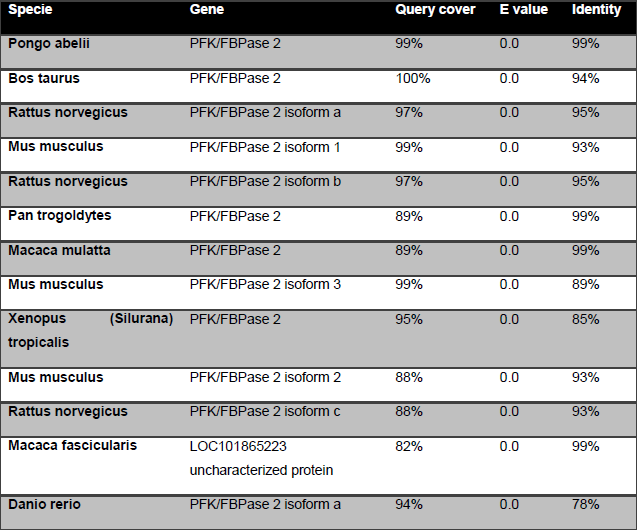 Genomic variants
There are 647 SNP variants described in PFKFB2 (see GeneCards).
The most SNP are found in non coding regions: 418 are presented in introns, 3 in splice donor variant, 107 in 3 UTR and 25 variant within a half kb of the end of gene and others.
Furthermore, 61 SNP are presented with the coding regions. The most of them are missense (31 variants) and also synonymous variants (19 variants) and only one frameshift. 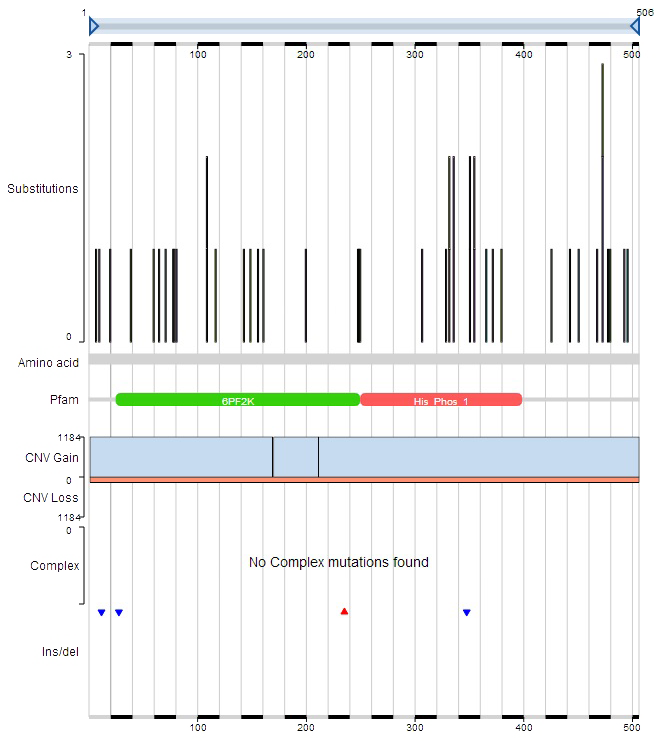 Figure 6. Histogram of mutations found among the amino acid sequence of PFKFB2 protein. The maximum number of substitutions at any specific genomic region is represented in Y axis. 6-phosphofructo-2-kinase and histidine phosphatase superfamily domains are represented in green and red respectively. From: COSMIC Database.