Review on eIF4B, with data on DNA\/RNA, on the protein encoded and where the gene is implicated.

Figure 1: Schematic representation of eIF4B gene, which is composed of 15 exons shown in blue.

eIF4B mRNA is ubiquitously expressed, however, regulation of eIF4B transcription has not been studied in detail.

Figure 2: Schematic representation of eIF4B protein. The numbers refer to amino acids flanking the functional domains. Ser406 and Ser422 that can be phosphorylated by several kinases are indicated.

The protein is reported to be expressed in most tissues, excluding liver, smooth muscle or soft tissues (Uhlen et al., 2010). Given the crucial role played by this protein in the cell, it is expected to be expressed ubiquitously albeit probably to different levels throughout different tissues.

eIF4B has a cytoplasmic localisation. 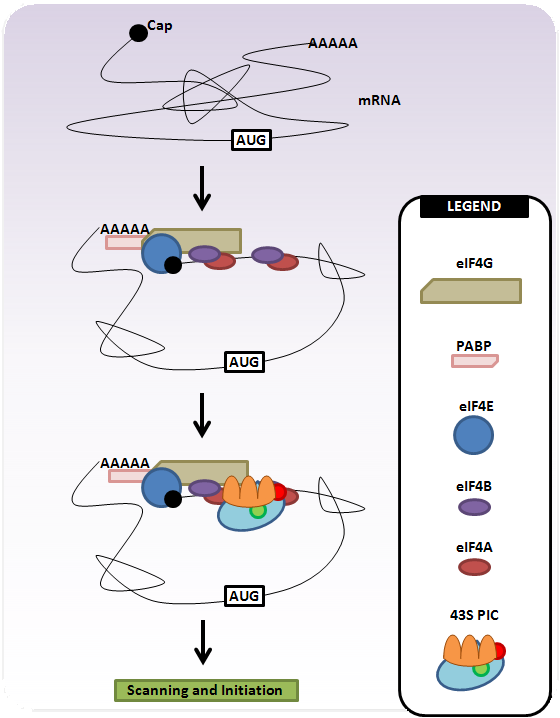 eIF4B is an RNA binding protein involved in the regulation of the initiation stage of protein synthesis. This protein is critical for the recruitment of the mRNA to the ribosome. It helps unwind secondary structures in the mRNA to allow ribosome scanning, via enhancing both ATPase and helicase activities of eIF4A.
Translation of an mRNA initiates with the binding of eukaryotic initiation factor complex eIF4F comprised of eIF4E, eIF4G and eIF4A (Pestova and Kolupaeva, 2002) (Figure 3):
- eIF4E interacts directly with the cap of the mRNA and helps recruit the machinery to the 5end of the mRNA.
- eIF4G protein provides a scaffold, bridging interactions between eIF4A, eIF4E, eIF3, PABP and RNA.
- Secondary structures in the mRNA that can be detrimental to the binding/scanning of the ribosome are unwound by the helicase eIF4A and its cofactors eIF4B and eIF4H (Grifo et al., 1983; Lawson et al., 1989; Rozen et al., 1990).
The binding of this eIF4F complex allows for the circularisation of the mRNA and the subsequent recruitment of the 43S pre-initiation complex (PIC) composed of the small ribosomal subunit (40S), the ternary complex (eIF2/met-tRNA/GTP) and several initiation factors (eIF1, eIF1A, eIF3 and eIF5) (Deo et al., 1999; Imataka et al., 1998; Lamphear et al., 1995; Wells et al., 1998). This complex will then scan the untranslated region (UTR) of the mRNA until a start codon is recognised (Kozak, 2002).
eIF4B acts at different levels to stimulate translation initiation: 1) by enhancing the ATPase and helicase activities of eIF4A and 2) by facilitating the recruitment of the 43S PIC.

1) Role of eIF4B in the stimulation of eIF4A
Although the precise mechanisms of action of eIF4B on the enhanced helicase activity of eIF4F are not fully understood, knockdown/aberrant expression of eIF4B in mammalian cells led to the reduction/stimulation in translation of mRNAs containing highly structured 5UTRs (Horvilleur et al., 2013; Shahbazian et al., 2010). Additionally, the ATPase and helicase activity of free eIF4A was shown to be significantly slower than the rates of translation initiation or the rates of scanning of the PIC (Grifo et al., 1984; Pause et al., 1994; Richter-Cook et al., 1998).
Consequently, one can envisage that eIF4B can help in the substrate (ATP and RNA) recognition by eIF4A. As such, eIF4B can modulate the affinity for ATP and RNA by inducing conformational changes in eIF4A (Bi et al., 2000; Marintchev et al., 2009; Methot et al., 1994; Nielsen et al., 2011; Rogers Jr. et al., 2001; Rozovsky et al., 2008). Additionally, eIF4B can enhance the efficiency of this process by coupling the ATP hydrolysis to duplex unwinding to avoid redundant, energy-consuming events (Ozes et al., 2011). In a manner similar to other single-stranded DNA binding proteins that associate with helicases, one possible mode of action for eIF4B is to stabilize newly unwound single-stranded RNA. In support of this, a direct interaction between eIF4A and eIF4B in the presence of RNA and an ATP analog have been established via the C terminal region of eIF4B (Nielsen et al., 2011; Rozovsky et al., 2008).

2) Role of eIF4B in the recruitment of 43S PIC to mRNAs
Through its various domains, eIF4B is now known to promote the association of the various players in the recruitment of the 43S PIC to the mRNA. The C terminal RNA binding domain of eIF4B enables its binding to mRNA whereas the RRM motif triggers interaction with the rRNA from the 43S PIC (Methot et al., 1996a; Naranda et al., 1994). The latter is thought to anchor the helicase eIF4A to the scanning ribosome (Methot et al., 1996a). Importantly, mammalian eIF4B dimerises and binds to eIF3a via its DRYG repeats, thus providing a main link between the eIF4F-loaded mRNA and the 43S PIC (Methot et al., 1996b).
These results provide evidence that eIF4B participates in recruitment and assembly of the PIC on mRNAs. Critically, recent findings have now shown that interactions involving eIF4B via its different domains are essential for the effective assembly and efficient scanning of the 43S PIC. Yeast eIF4B together with eIF4F and eIF3 decreased the dependency on high concentrations of eIF4A for the rapid assembly and recruitment of the 43S PIC on endogenous short leader mRNAs (Mitchell et al., 2010; Walker et al., 2013), thus eIF4B can mediate an enhancing effect on the PIC recruitment to an mRNA.

The spatial positioning of eIF4B on the scanning ribosome is poorly understood. The helicase complex eIF4A/eIF4B could be located near the mRNA exit channel (i.e. 5/behind the scanning PIC) or alternatively at the mRNA entry channel (i.e. 3/in front of the scanning PIC) (Figure 4). To support the former hypothesis, a Brownian ratchet model was proposed in which eIF4F is located near the exit channel of the PIC (Spirin, 2009). In this model, eIF4A-unwound and eIF4B-captured single-stranded RNA would be scanned by diffusion by the PIC. Contradictory, new evidence have shown that yeast eIF4B mapped to the head of the PIC near the entry channel (Walker et al., 2013). In such a case, the eIF4F complex would be recruited to the cap and would be located at the forefront of the PIC, thus allowing efficient unwinding and scanning (Marintchev et al., 2009). New experimental approaches, including structures of the human ribosome associated with factors, should be able to shed some light on the matter in the future.

Figure 4: Two possible models for eIF4B position in the initiation complex during scanning of 5UTR.

eIF4B is one of the least conserved initiation factors in terms of sequence homology (Cheng and Gallie, 2006), however, its function is conserved and eIF4B homologues can be found across all eukaryotic species. In addition to the human eIF4B, one of the most studied eIF4B homologs is the yeast protein, TIF3 (Altmann et al., 1993). eIF4H is a 23kDa paralog of eIF4B showing homology to the RRM RNA binding domain. eIF4H stimulates eIF4A helicase activity in a similar way to eIF4B. 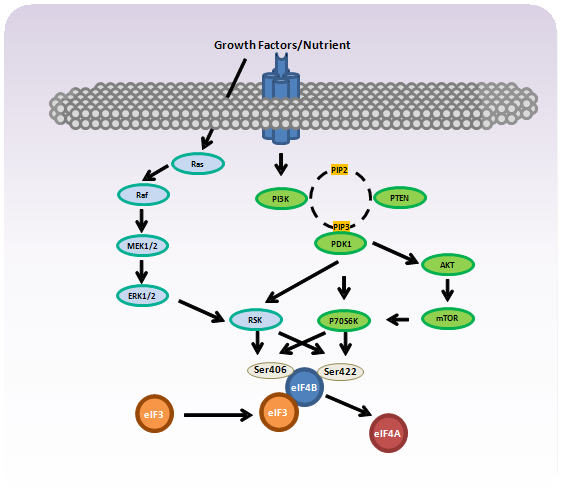