The gene spans over 36 kb and is composed of 19 exons, both in human and mouse. 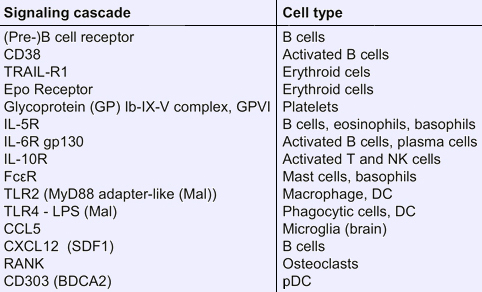 The BTK protein is a 77 kDa protein of 659 amino acids. Translation of the BTK transcript starts at the ATG site that is located in exon 2 and ends in exon 19.
The BTK protein is composed of an N-terminal Pleckstrin homology (PH) domain followed three protein interacting domains: Tec homology (TH) region, Src homology 3 (SH3) domain and SH2 domain. A tyrosine-kinase catalytic domain is located at the C-terminal end. Two tyrosine phosphorylation sites are located at the positions Y223 and Y551, which are located in the SH3 and kinase domain, respectively. Both phosphorylation sites play a pivotal role in the activation of BTK. Y551 is transphosphorylated by Syk (or Lyn) kinases which promotes the catalytic activity of BTK, with subsequent autophosphorylation at position Y223.

BTK is expressed in all cell lineages of the hematopoietic system, except for T cells. Therefore BTK expression is found in B lymphocytes, platelets, erythroid and myeloid cells (monocytes, macrophages, granulocytes and dendritic cells). Within the B cell lineage, BTK is already expressed in the earliest detectable B cell precursors, and expression is downregulated in plasma cells.

The protein is predominantly localized in the cytoplasm. BTK activation upon receptor signaling results in translocation of BTK protein from the cytoplasm to the membrane. The membrane association of BTK is dependent on the interaction of its PH domain with PIP3 (phosphatidylinositol (3,4,5)-trisphosphate), which is a second messenger that is synthesized from PIP2 by PI3K (phosphoinositide-3 kinase). The translocation to the membrane brings the BTK protein in close proximity to the Lyn en Syk kinases that transphosphorylate BTK at tyrosine Y551. The E41K gain-of-function BTK mutant, in which the E41 residue is mutated in to a lysine residue, manifests increased membrane localization in quiescent cells, independent of PI3K activity, probably resulting from increased affinity for PIP2. Transforming activity is kinase-domain dependent and is potentiated by introduction of a second mutation at position Y223.

BTK is a signaling mediator downstream of a variety of receptors in several different cell types (listed in Table 1), including the B cell receptor (BCR).

BTK belongs to the TEC family of cytoplasmic tyrosine kinases. This family is composed of TEC, BTK, TXK/RLK, ITK/EMT, and BMX. Btk is highly conserved between mouse and human.

Entity name
Pre-B cell tumors
Note
Truncated BTK forms in human BCR-ABL1 + leukemia
BTK is constitutively phosphorylated by the oncogenic BCR- ABL1 fusion product. Inhibition of BTK activity specifically induces apoptosis in BCR-ABL1+ leukemia cells to a similar extent as inhibition of BCR-ABL1 kinase activity itself. BCR-ABL1 cannot directly bind to full-length BTK, but induces the expression of a truncated BTK splice variant that acts as a linker between the two kinases. Thus, truncated BTK enables BCR-ABL1-dependent activation of full-length BTK, which initiates downstream survival signals and mimics pre-B cell receptor signaling.
Defective expression of BTK in acute lymphoblastic leukemia (ALL)
In an analysis of BTK protein and mRNA expression in infant B-lineage leukemia cells variable but often reduced levels of BTK expression was found. RT-PCR revealed the presence of aberrant transcripts which would encode BTK proteins with either a deleted or a truncated kinase domain. In infant pre-B MLL-AF4+ leukemia cells full-length BTK was detectable in only half of the cases, whereas in ALL cells harboring other fusion genes (including BCR-ABL1, E2A- PBX1 and TEL- AML1) full-length BTK was typically co-expressed with kinase-deficient variants. Thus, lack of BTK or expression of dominant-negative BTK splice variants in B cell precursor leukemia cells can inhibit differentiation beyond the pre-B cell stage and protect from radiation-induced apoptosis.
Btk as a tumor suppressor in pre-B cell leukemia in mice
Expression of the pre-B cell receptor (pre-BCR) leads to activation of the adaptor molecule Slp65 (also termed Bash or Blnk) and Btk. Spontaneous pre-B cell leukemia development in Slp65-deficient mice demonstrate that Slp65 acts as a tumor suppressor. Slp65 and Btk have a synergistic role in the developmental progression of large cycling into small resting pre-B cells. Btk/Slp65 double mutant mice have a dramatically increased pre-B cell tumor incidence (approximately 75%, 16 wk of age), as compared with Slp65 single deficient mice (<10%). Therefore, Btk cooperates with Slp65 as a tumor suppressor in pre-B cells. Moreover, transgenic expression of a constitutive active form of Btk, the E41K-Y223F mutant, prevented tumor formation in Btk/Slp65 double mutant mice, indicating that constitutive active Btk can substitute for Slp65 as a tumor suppressor. Using a kinase-inactive K430R-Btk mutant, it was shown that Btk exerts its tumor suppressor function in pre-B cells as an adaptor protein, independent of its catalytic activity. Furthermore, loss of Btk and Tec increases the tumor frequency in Eµ-myc transgenic mice, expressing the c-myc oncogenic transcription factor that promotes both proliferation and differentiation.
Entity name
X-linked agammaglobulinemia (XLA).
Note
In 1993 BTK was identified as the gene defective in the human immunodeficiency disease X-linked agammaglobulinemia (XLA). The XLA disease, which was first described by Dr. O.C. Bruton in 1952, is characterized by protracted and recurrent bacterial infections.
Clinical manifestations of XLA
XLA Patients have less than 1% of the normal number of peripheral B cells. Serum levels of all Ig classes are very low due to the lack of plasma cells in the secondary lymphoid organs. In XLA patients, B cell development is almost completely arrested at the pre-B cell stage: the pre-B cell fraction mainly consists of small cells, suggesting that Btk is necessary for their proliferative expansion. Heterozygous female XLA carriers do not have clinical or immunological symptoms, but manifest a unilateral X chromosome inactivation in the peripheral blood B lymphocyte population, because of a selective disadvantage of cells that have the defective Btk gene on the active X chromosome. In contrast to XLA, Btk-deficiency in the mouse, termed X-linked immunodeficiency (xid), is associated with a very mild early B cell developmental block, but with impaired maturation and poor survival of peripheral B cells. XLA is a heterogeneous disease, even within single families and no correlation has been observed between the position of the mutation and phenotypic variables, such as age at time of diagnosis or severity of the clinical or immunological symptoms. Therefore, this heterogeneity might be related to other genetic or environmental factors.
Mutations in BTK gene that cause XLA
The BTK mutations that have been identified in XLA patients compromise BTK function either through gross structural changes (such as deletions or altered protein folding) or through specific loss of functionally relevant residues. Strikingly, none of the found unique missense mutations found in XLA patients is located in the SH3 domain of BTK, which harbors the Y223 tyrosine residue. An international registry for XLA (http://bioinf.uta.fi/BTKbase/) shows that mutations in all domains of the BTK gene cause the disease.
Approximately 80-90% of the patients that have agammaglobulinemia patients have a deficiency of the BTK protein. The other about 15% of the agammaglobulinemia cases are caused by defects in autosomal genes such as the constant region of immunoglobulin (Ig) heavy chain, λ5, (IGLL), Igα (CD79a), Igβ (CD79b), or SLP65 (BLNK) resemble the clinical manifestation of XLA.