Myeloid proliferations in Down syndrome

Review on myeloid proliferations related to Down syndrome, with data on clinics, pathology, and involved genes.

Transient abnormal myelopoiesis (TAM) is restricted to newborns with trisomy 21 or those with trisomy 21 mosaicism. The disease is characterized by increased peripheral blood blasts, usually megakaryoblasts, with or without clinical symptoms. Underlying genetics demonstrate somatic mutations in the GATA1 gene. Most cases spontaneously resolve within months without any therapeutic intervention.

The cell of origin is thought to be the fetal liver hematopoietic stem cell/progenitor cell.

The current hypothesis is that TAM arises in the liver. Evidence supporting this hypothesis includes the spontaneous resolution of hematopoiesis in the fetal liver within months of birth as hematopoiesis fully switches to the bone marrow, which is similar to the time course of TAM. In addition, severe TAM demonstrates increased blast infiltration of the liver with relative sparing of the bone marrow. Lastly, transgenic mice expressing GATA1 mutations show altered megakaryocyte lineage proliferation/differentiation only in fetal liver progenitors (reviewed in Roy et al., 2009). Evidence demonstrates that the presence of trisomy 21 promotes abnormal megakaryocyte-erythroid proliferation in the fetal liver (Chou et al., 2008; Tunstall-Pedoe et al., 2008). The addition of a somatic GATA1 mutation transforms the progenitors, leading to TAM. The combination of constitutional trisomy 21 with somatic GATA1 mutations has been found to be both necessary and sufficient for TAM (Nikolaev et al., 2013). , In those under 5 years of age, most cases of ML-DS (~70%) are acute megakaryoblastic leukemia (AML M7 by French-American-British (FAB) categorization) (Gamis et al, 2003). Occasional presentations of FAB M0, M1, M2, and M4/M5 have also been reported (Lange et al., 1998; Rao et al., 2006).

As stated previously, TAM is restricted to newborns with trisomy 21, which has an incidence of approximately 1/700 live births. Clinical TAM (i.e. those with obviously increased blasts with or without symptoms) occurs in approximately 4-10% of those with trisomy 21. Approximately 5-16% of those affected with TAM have trisomy 21 mosaicism (Klusmann et al., 2008; Gamis et al., 2011). GATA1 mutations have been identified in 3.8% up to 30% of neonates with Down syndrome (Pine SR et al., 2007; Roberts et al., 2013). In a recent study using targeted next-generation sequencing of all Down syndrome neonates, low abundance GATA1 mutant clones were detected in 20.4% of neonates who were originally negative for mutations by Sanger sequencing/denaturing high performance liquid chromatography and thought to not have TAM (Roberts et al., 2013); the disease associated with these low level GATA1 mutation clones has been termed "silent TAM" due to their indistinguishable clinical picture and laboratory values compared to Down syndrome infants without TAM, including <10% blasts. , Of note, GATA1 gene mutation testing/monitoring is not currently the standard of care in patients with Down syndrome. Many groups advocate for a peripheral blood smear with differential at birth and every three months thereafter until the age of 4 years, at which time the risk of leukemia is reduced (Roy et al., 2009; Mateos et al., 2015; Bhatnagar et al., 2016).

The clinical presentation of TAM is variable, with many infants (10-25%) being asymptomatic, only presenting with increased circulating blasts (Massey et al., 2006; Klusmann et al., 2008). While there is no defined percentage of blasts for the diagnosis of TAM, a threshold of >10% blasts has recently been found to have 100% sensitivity for detecting a coexisting GATA1 mutation, though the specificity is only 74% (Roberts et al., 2013). This specificity is low because, in general, Down syndrome neonates have increased peripheral blood blasts (median 4%; Roberts et al., 2013). Others recommend a blast minimum percentage of 20% (reviewed in Roberts and Izraeli, 2014). Of note, those with "silent TAM" do not have increased blasts compared to Down syndrome neonates without TAM. 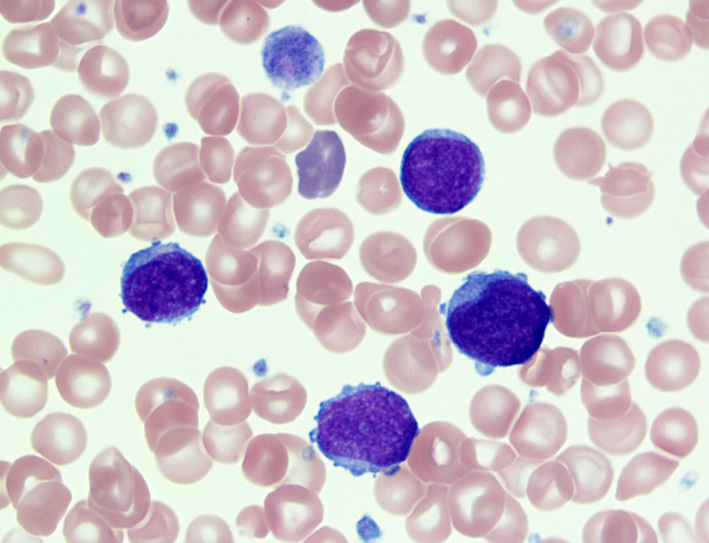 Figure 2: Peripheral blood smear reveals increased blasts which are medium to large in size with smooth chromatin, prominent nucleoli (sometimes multiple) and basophilic cytoplasm. Some of these blasts may demonstrate cytoplasmic blebs. Giant platelets may often be seen. 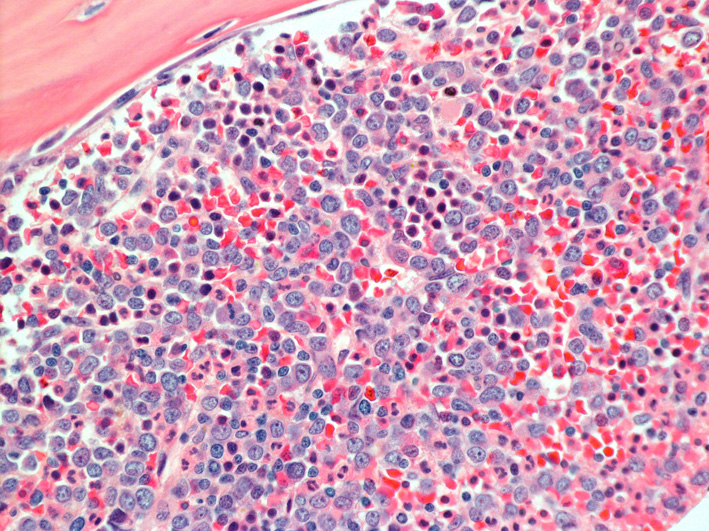 TAM is characterized by somatic mutations in the transcription factor gene GATA1 on chromosome Xp11.23. These mutations are predominantly within exon 2 (97%), with the remaining identified mostly in exon 3.1 (Alford et al., 2011). GATA1 mutations result in N-terminal truncating mutations leading to a shortened GATA1 protein, GATA1s. Of note, 10-20% of cases of TAM have multiple GATA1 mutant clones (Alford et al., 2011; Roberts et al., 2013). Whole exome sequencing of TAM cases has reveal low numbers of non-silent mutations in other genes in these patients (1.7, range 1-5; Yoshida et al., 2013). However, Nikolaev et al. (2013) found that the presence of such additional mutations can accumulate in TAM without immediate progression to ML-DS, and that these individuals with additional mutations can still have disease regression.

The majority of patients (66-84%) have spontaneous resolution of clinical and laboratory abnormalities without treatment within 2-3 months (Klusmann et al., 2008). Peripheral blasts usually clear prior to hepatomegaly resolution (Gamis et al., 2011). Approximately 16-30% of infants, whether they were asymptomatic or had clinical symptoms, develop myeloid leukemia of Down syndrome (Klusmann et al., 2008) (see below).

While most infants have spontaneous resolution, approximately 15-20% of infants still die; however, approximately half of these deaths are not TAM-related, but instead related to other congenital abnormalities of trisomy 21 (Klusmann et al., 2008; Gamis et al., 2011). TAM mortality risk factors include WBC >100 K/uL, prematurity, ascites, effusions, bleeding diathesis/ coagulopathy, and failure to spontaneously clear peripheral blasts (Klusmann et al., 2008). Those with pathologically diagnosed hepatic fibrosis are more likely to die of disease (Gamis et al., 2011).

Myeloid leukemia of Down syndrome

Myeloid leukemia of Down syndrome (ML-DS) encompasses a spectrum of myelodysplastic syndrome and its evolution into leukemia in children with Down syndrome.

Similar to TAM, trisomy 21 and a somatic GATA1 mutation are thought to be required for the development of ML-DS. However, for this progression, additional genetic and/or epigenetic events are required. Children over 5 years old may not have mutations in the GATA1 gene, and possible consideration should be given to a more conventional MDS or AML similar to those diagnosed in non-Down syndrome patients; these children may need therapy with appropriate non-Down syndrome protocols.

ML-DS may occur after a remission time period from TAM, or as an overt progression/evolution of TAM without a period of remission. In the latter, the infant may have persistent abnormal laboratory values over several months, and in the former, the laboratory values tend to normalize. In those with silent TAM or in remission, ML-DS is usually first detected by thrombocytopenia with or without leukopenia and anemia and with low numbers or absent circulating blasts (Lange et al., 1998). In approximately 70% of patients, myelodysplastic syndrome precedes acute leukemia (Creutzig et al., 1996). Hepatosplenomegaly may be present. Compared to non-Down syndrome cases of myeloid leukemia, ML-DS cases are less likely to have lymphadenopathy and CNS blast involvement (Gamis et al., 2003). 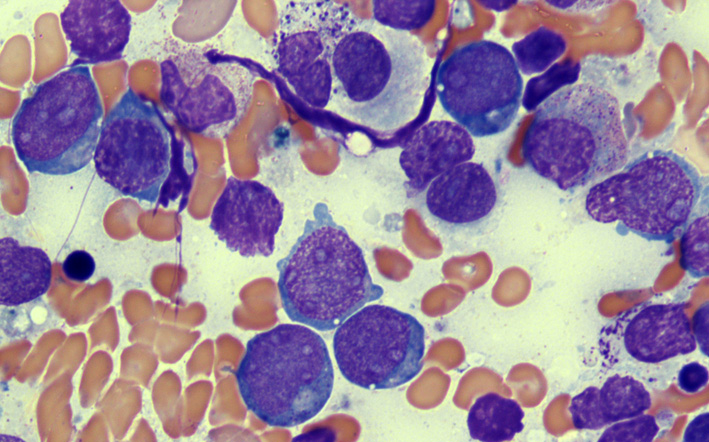 Figure 4: Increased blasts may be identified on a bone marrow aspirate if it does contain particles. These blasts are characterized as medium to large sized cells with round to irregular nuclear contours, smooth chromatin, prominent nucleoli (sometimes multiple), and basophilic cytoplasm often with cytoplasmic blebs. Rare blasts may demonstrate cytoplasmic granules such as the blast in the bottom center. Dysplastic megakaryocytes may also be identified such as the small megakaryocyte at the top center.

Peripheral blood and bone marrow blasts in ML-DS are similar to those in TAM, both morphologically and immunophenotypically. The bone marrow aspirate may be hemodilute and/or aparticulate due to marrow fibrosis hampering aspiration. During the myelodysplastic syndrome phase, dysplastic changes of megakaryocytes and erythroid cells may also be identified along with low levels of blasts in the bone marrow. 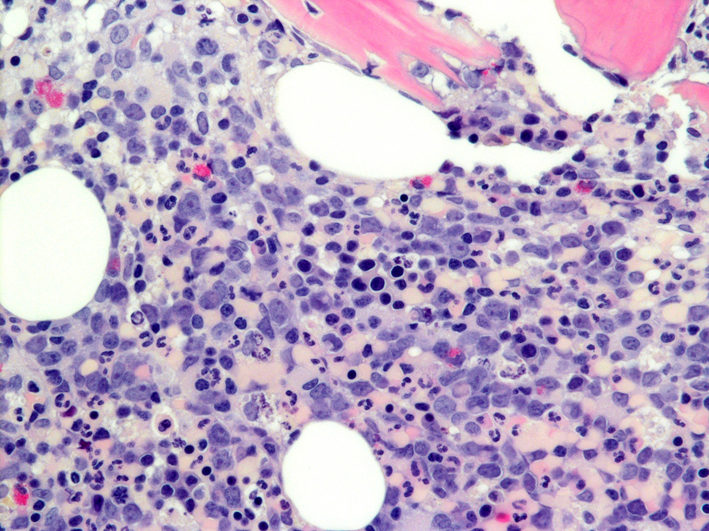 Figure 5: In the bone marrow biopsy obtained from the same patient demonstrated in Figure 4, the core biopsy demonstrates increased blasts with prominent nucleoli in a background of maturing erythroid and myeloid precursors. 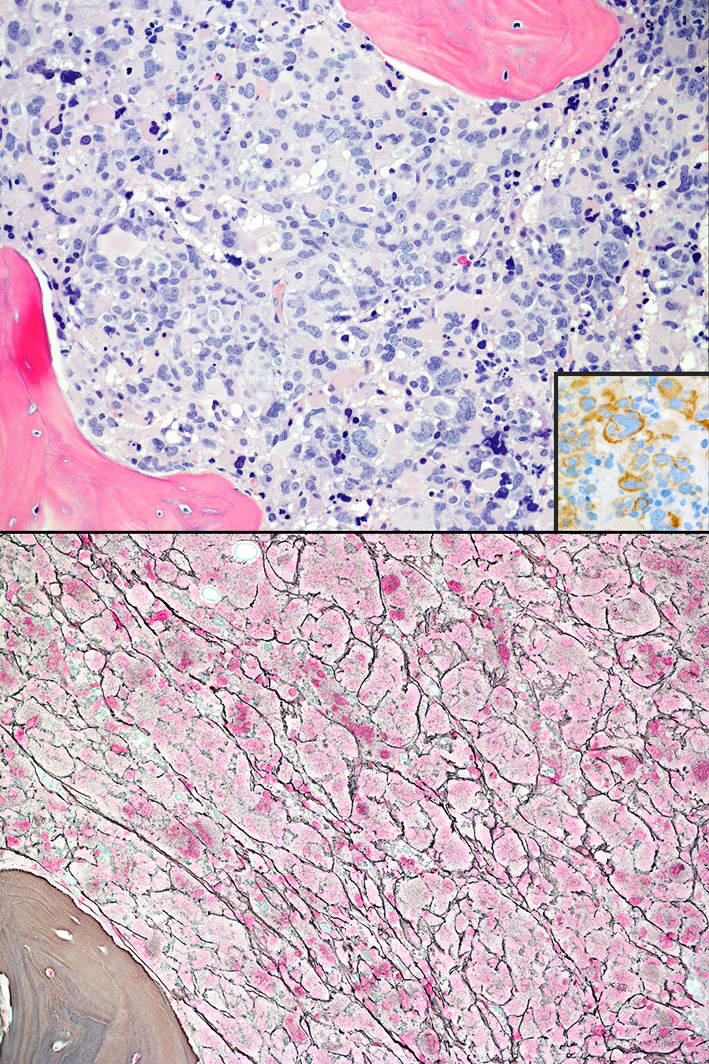 Figure 6: Other bone marrow biopsies may demonstrate marked fibrosis, as demonstrated by the bottom panel stained for reticulin. The core biopsy can demonstrate a marked increase in atypical and dysplastic megakaryocytes, many of which are blasts. The inset panel demonstrates CD117 immunohistochemical staining of the megakaryoblasts.

N-terminal somatic mutations in the GATA1 gene are present in all cases of ML-DS, and, usually, an individual has the same GATA1 clone in both TAM and ML-DS. However, 10-20% of cases of TAM have multiple GATA1 mutant clones, and the larger size of the GATA1 mutant clone has not been found to always correspond with the clone present in ML-DS (Nikolaev et al., 2013; Yoshida et al., 2013). By whole exome sequencing, more non-silent mutations in additional genes are present in ML-DS compared to TAM, with recurrent mutations identified in core cohesion components (including RAD21 and STAG2), CTCF, epigenetic regulators (including EZH2 and KANSL1), RAS pathway genes (including NRAS, JAK1, and JAK2), and other genes (including DCAF7 and TP53) (Yoshida et al., 2013).

Unlike TAM, ML-DS does require chemotherapy to achieve complete remission (CR). However, compared to non-Down syndrome pediatric acute leukemia, they can be treated with reduced intensity chemotherapy protocols without stem cell transplantation. Reduced chemotherapy intensity is encouraged due to high rates of treatment toxicity in Down syndrome children (Lange et al., 1998). 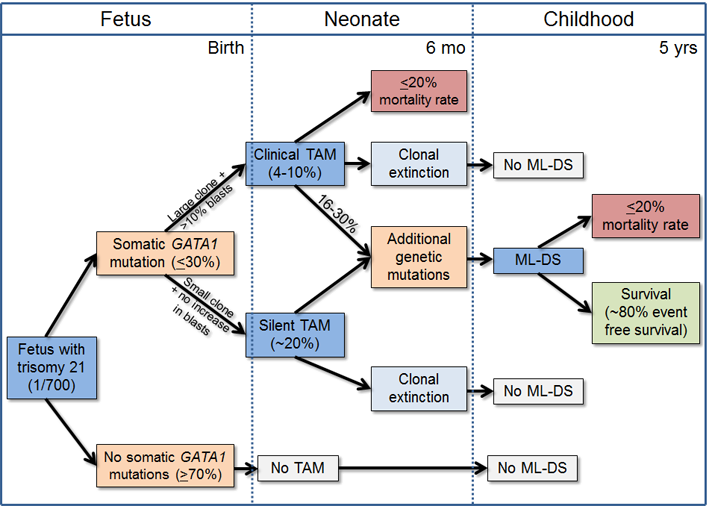 Figure 1: Natural history of transient abnormal myelopoiesis (TAM) and myeloid leukemia of Down syndrome (ML-DS) with approximate incidences of those affected. Both trisomy 21 and a somatic GATA1 mutation are required for progression to TAM. Most infants with TAM demonstrate extinction of the GATA1 clone; however, a subset acquires additional genetic mutations, allowing the progression to ML-DS. Overall, approximately 0.5-3% of Down syndrome patients develop ML-DS. Figure adapted from Bhatnagar et al., 2016 and Mateos et al., 2015.

Myeloid proliferations in Down syndrome