More than 95% of laryngeal tumours are squamous cell carcinomas (SCC). Most commonly, they arise from the glottic region of the larynx, namely the true vocal cords, so they usually present with changes in voice quality (i.e. hoarseness). The vast majority of patients have a history of smoking, while alcohol consumption is considered a significant co-factor.

Light microscopy and occasionally immunohistochemistry are the main procedures of histological diagnosis and classification in laryngeal tumours. A histopathological classification of squamous cell carcinoma can be performed based on Broders method. The use of microarray generated data is likely to radically improve disease sub-classification.
True benign tumours constitute 5% or less of all laryngeal tumours. The most common benign tumour of the larynx is papilloma (85%).
Other types include: chondroma, haemangioma, lymphangioma, schwannoma, neurofibroma, adenoma, granular cell myoblastoma, leiomyoma, rhabdomyoma, fibroma, lipoma and paraganglioma. 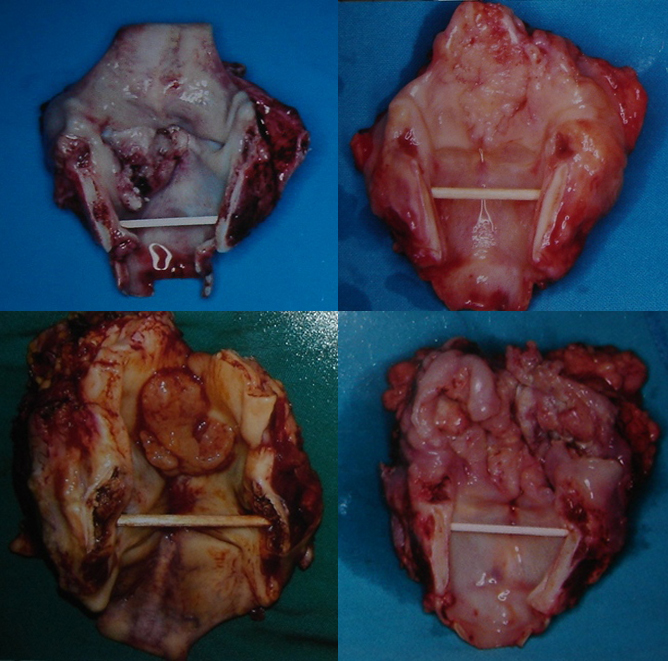 Squamous cell carcinoma is further divided according to tumour location into four subtypes:

The exact cause of laryngeal cancer is still unknown. However, several interrelated co-factors (mainly tobacco smoking and alcohol consumption), are clearly associated with an increased incidence in laryngeal cancer. Both of them increase the risk of cancer in a dose-dependent way. It appears that nicotine is not responsible for cancer itself, but polycyclic aromatic hydrocarbons and nitrosamines are carcinogenic. Poor diet and oral hygiene, vitamins deficiency, cirrhosis and depressed immune system often found in alcoholics may also contribute to cancerous process. Infections from herpes simplex and HPV, gastroesophageal reflex disease, anatomical malformations, Plummer-Vinson syndrome, steam and heat inhalation, thermal burns and exposure to ionizing radiation, asbestos, nickel, textile fibers and various chemicals, like formaldehyde, vinyl chloride and benzopyrenes, have also been considered as aetiological factors. Many ongoing studies are awaited to identify genetic factors and oncogenes that may be have an aetiological interest.

The incidence of laryngeal carcinoma is relatively low in comparison to that of carcinomas of all organs. Laryngeal cancer comprises 2 to 5% of all malignant diseases diagnosed annually worldwide. The incidence is comparable to that of cancer of mouth and thyroid, but only one tenth as high as that of lung cancer. There are areas where the incidence is higher (greater than 10 per 10,000) including Spain, Italy, France, Brazil, India and the Afro-caribbean populations in parts of the USA. Low incidence areas (less than 2 per 100,000) include Japan, Norway and Sweden. Worldwide, the peak incidence of laryngeal cancer is highest in men aged between 55 to 65 years. The male-to-female ratio varies from 5 to 20:1, however the last decades there is a decrease in this ratio, because of an increase of laryngeal cancer in women. There is a notable social class difference, in that laryngeal cancer is twice as common in men with low socioeconomic status. It is also more common in people residing in cities than in rural areas. Most studies show that inhabitants of the most industrialized cities have an incidence of laryngeal cancer 2 to 3 times higher than that of rural inhabitants. These racial, social and urban variations may be reflect different lifestyle and habits and also confirm the already recognized harmful effects of tobacco and alcohol. Survival, in terms of the relative 5-year survival rate, for laryngeal cancer has been increasing the last four decades. However, long-term (10-year) relative survival rates have remained at about 50% for quite some time.

The natural history and clinical picture of laryngeal cancer is dictated by its site of origin and its tendency to disseminate to the regional lymphatics. Progressive continuous hoarseness is the cardinal symptom of laryngeal carcinoma, especially the glottic one. Dyspnoea and stridor, pain, dysphagia, cough, swelling in the neck, haemoptysis, halitosis, reflective otalgia, tenderness of the larynx and weight loss can also occur during the course of disease. Neck metastases are more common in supraglottic cancers due to rich lymphatic network leading to early dissemination of primary tumour to the regional lymph nodes. On the contrary, glottic tumours because of the poor lymphatic network of the true vocal cords rarely present with regional neck metastases at the time of diagnosis. Staging of primary laryngeal tumours is dependent on the surface extent of the lesion to various sites within the same region of the larynx or from one region to the other or its extension beyond the larynx to adjacent organs as well as on the vocal cords mobility. Fixation of the vocal cords referred as T3 lesion independently of the initial tumour location and signifies a deeply invasive lesion. About 70% of the patients with supraglottic tumours at the time of diagnosis presented with advanced disease stage (III-IV). On the contrary, 75% of the glottic tumours presented with localized disease at initial stages (I-II). Distant metastasis is uncommon to be the first symptom of laryngeal cancer, however it can be found in about 5% at the time of initial presentation with appropriate investigation and lung comprises the most commonly involved site. At the time of diagnosis a second primary tumour can be found within the respiratory tract in 5% to 10% of the cases. Half of them are located in the lungs and have to be differentiated from distant metastases. In this setting it is important to perform a panendoscopy and appropriate radiological evaluation to exclude such pathology.

Pathological diagnosis for laryngeal cancer is achieved after biopsy which is obtained at direct laryngoscopy under general anaesthesia.
The vast majority of all laryngeal malignancies (95%) are conventional squamous cell carcinomas (SCC) and they vary according to their degree of differentiation to well, moderate and poor carcinomas. Glottic cancers are generally well differentiated and have a less aggressive behaviour in comparison with carcinomas at the other sites of the larynx. SCC often arises in a background of mucosal squamous dysplasia or carcinoma in situ and typically presents islands, tongues and clusters of atypical cells invading the laryngeal stroma. Features of squamous differentiation also comprise individual cell keratinisation, intercellular bridges and keratin pearls. Recognition of the less common variants like verrucous, spindle cell and basaloid SCC is significant because their biological course often is different from that of conventional SCC.

Except of conventional methods, various ancillary techniques provide information about a tumour that cannot be obtained by routine histopathologic examination. These methods have been applied to LSCC in order to evaluate a range of potential prognostic indicators, including DNA ploidy, proliferative activity, and oncogene amplification.

Nowadays, cDNA microarrays, is a useful method from which large amounts of genetic information can be obtained, in order to establish a molecular classification in LSCC, based on patterns of global gene expression.

Over 95% of patients with LSCC are treatable. Causes of untreatability include the presence of distant metastases, very advanced locally and regionally tumours, poor general health, and patients refusal.
The standard options for treatment of LSCC are surgery, radiotherapy, chemotherapy or a combination of them. Radiotherapy is used in more than 70% of patients, surgery in about 55% and chemotherapy in about 10%. The management of laryngeal cancer varies in different parts of the world. However, it is widely accepted that early-stage LSCC can be adequately treated with single-modality therapy, either surgery or radiotherapy, with a 5-year local control of 85-95%. For more advanced disease (stages III and IV), a multimodality treatment based upon a combination of surgery and irradiation is the most common approach.
Recently, new therapies based on a molecular basis of LSCC are in use or under development. The use of cellular tumour markers as therapeutic targets is being studied in order to block specific pathways involved in the cancerous process and tumour aggressiveness or invasiveness, restoring effective oncosuppression. Considering this, EGFR pathway is a good target for therapeutic interventions in LSCC. Several approaches can interfere with EGFR function and may be useful for anticancer treatment such as, the use of monoclonal antibodies (MAb) against the extracellular ligand binding domain, ligand-toxin conjugates that kill target cells following endocytosis, tyrosine kinase inhibitors that inhibit ligand-induced EGFR activation, and antisense oligonucleotides against EGFR mRNA. Furthermore, transient overexpression of the wild-type p53 gene could provide a potential molecular treatment strategy in LSCC. In head and neck cancer, the most used gene-delivery tool has been the recombinant adenovirus Ad-p53. A gene therapy approach using wild-type human p53 has already been demonstrated to induce apoptosis and radio-, chemosensitisation in cell lines. Thus, the use of p53 gene therapy in combination with radio- or chemotherapy could be considered a rational possibility. Another potential application is the treatment of dysplastic lesions, as p53 mutations seem to occur early in laryngeal carcinogenesis. However, the main problem of all these approaches, remains the absence of a really efficient, long-term gene-delivery system.

Once the diagnosis of laryngeal cancer has been documented the disease is staged according to the TNM classification system (stages I-IV) using the UICC/AJCC criteria. This system takes into account tumour size and location (T), lymph node involvement (N) and presence of distant metastasis (M). In general, the higher the stage (both overall and within each category) the poorer the prognosis.
Small glottic cancers have better prognosis than supraglottic ones. The overall 5-year survival following treatment is 80% for glottic and 50% for supraglottic tumours, mainly because the latter present an increased incidence of nodal metastases. Nearly two-thirds of patients with supraglottic cancers have neck metastases at the time of initial treatment. Survival decreases by more than one third when clinically positive lymph nodes are present. Five-year disease free survival of patients with supraglottic cancer is 80% for stages I-II, 70% for stage III and 40% for stage IV. Patients with glottic cancers have a better long-term prognosis. Five-year disease free for stages I-II is 85%-90%, for stage III is 75% and for stage IV is 45%-50%. However, in cases with an extremely advanced local and regional disease the overall 5-year survival is less than 5%.

Various chromosomal alterations have been observed in laryngeal SCC, such as 9p21 loss which contains the p16 gene, 11q13 which contains the CCND1 locus, 17p13 where the p53 gene is located, 3p with at least three putative tumour suppressor loci, 13q21, 6p and 8. Some of these alterations have been demonstrated to precede the development of cancer by several years, while others may be also detected as late late-occurring cytogenetic events. A few of them could be proposed targets for preventive strategies. Among the most frequent and relevant cellular changes in laryngeal carcinogenesis are those involving p53, cyclin D1 (CCND1), p16 and EGFR.
The nuclear phosphoprotein p53 is involved in gene transcription, DNA synthesis and repair, cell cycle coordination and apoptosis. Disruption, or perturbation of p53 function have been detected not only in the laryngeal but almost in all head and neck cancers. p53 point mutations or deletions (also by LOH at 17p13) are frequent and p53 inactivation occurs in the transition from the preinvasive to the invasive state.
Cyclin D1 is involved in cell cycle progression and interacts with cyclin-dependent kinases. When Cyclin D1 gene (CCND1) amplification is observed in precancerous and cancerous lesions, cyclin D1 is always overexpressed. In turn, cyclin D1 overexpression does not determine, but always anticipates gene amplification, which probably represents a more stable, non-reversible, alteration in tumour cells.
Early in the cancerous process altered p53 gene function and CCND1 gene overexpression increase genetic instability and promote further genetic and chromosomal alterations, such as CCND1 amplification which is considered as the ultimate transforming event by the selection of a malignant subclone from a genetically altered field.