Genomic neighbourhood and organisation of EPHA1.

3,359 nucleotide mRNA. Two alternative splice variants, predicted to result in truncation within the extracellular domain of EphA1, have been reported.

EphA1 was isolated originally from an erythropoietin producing hepatoma cell line, from which its name, and the name of its gene family, derives. 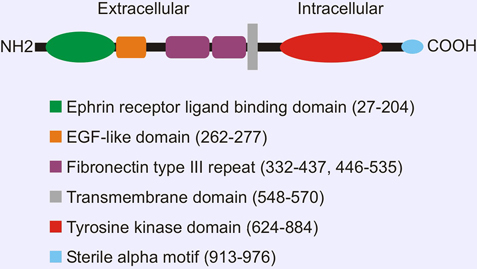 The EPHA1 gene encodes a 976 amino acid protein with a calculated molecular weight of 108,126.89 and an isoelectric point of 6.6254. Amino acids 1-25 constitute a signal peptide.
EphA1 is the founding member of what is recognised as the largest subfamily of the receptor tyrosine kinases. This is an evolutionarily ancient protein group with members being present in sponges, worms and fruit flies. The expansion in the number of Eph receptor-encoding genes along with genes encoding their ligands, the ephrins (Eph receptor interacting proteins), is proposed to have contributed to the increase in complexity of the bilaterian body plan. Fourteen Eph receptors have been identified in vertebrates. These are subdivided into either EphA (EphA1, EphA2, EphA3, EphA4, EphA5, EphA6, EphA7, EphA8, EphA10) or EphB ( EphB1, EphB2, EphB3, EphB4, EphB6) subclasses which differ primarily in the structure of their ligand binding domains. EphA receptors also exhibit greater affinity for binding GPI-linked ephrin-A ligands while EphB receptors bind transmembrane ephrin-B ligands. While interactions are somewhat promiscuous, and some cross-class binding occurs, each Eph receptor displays distinct affinity for the different ephrin ligands. Eph-ephrin binding involves cell-cell contact. Upon binding, both Eph and ephrin proteins on respective cells dimerise, and undergo higher order clustering. This results in signalling within both the Eph- and ephrin-bearing cells (bidirectional signalling) and either subsequent adhesion or repulsion of the interacting cells. Cell-cell contact, and thus Eph-ephrin signalling, may be terminated either by enzymatic cleavage of the extracellular domain of the Eph receptor or ephrin ligand or endocytosis of Eph-ephrin complexes.
The high affinity ligands for EphA1 are ephrin-A1 and ephrin-A3. EphA1 also binds fibronectin, a non-activating ligand.

Not yet entirely established. Generally repulsive interaction with its high affinity ligands ephrin-A1 and ephrin-A3. Transgenic expression of EphA1 in the blastula of pre-implantation mice is lethal (Duffy et al., unpublished). EphA1 homozygous null mice exhibit kinked tails (80%) and imperforate vagina (18% of females). The apparent absence of EphA1 in fish (zebrafish, medaka, fugu) and amphibia (Xenopus) and its emergence in vertebrates with reptiles (anole lizard) and birds (chicken) hints at an association with the transition of life from an aquatic to terrestrial environment. The presence of a membrane-embedded ionogenic Glu547 residue within the transmembrane domain of EphA1 also is unique among the Eph receptors. The structural-dynamic properties of the transmembrane domain have been shown to be dependent on the ionisation state of this residue, a finding that implies that the conformational flexibility and activation of the EphA1 receptor can be regulated by such external and local factors as pH and lipid composition of the membrane, a finding which may be of particular relevance to EphA1 function in the skin and kidney. 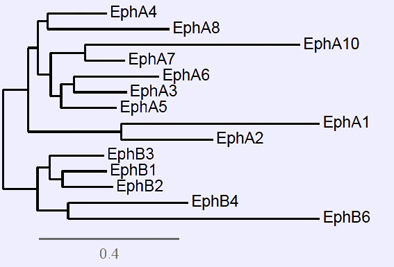 No germinal mutations identified to be associated with cancer so far.

Rare. A single heterozygous missense mutation E703K within the tyrosine kinase domain has been reported for a lobular breast carcinoma.