EPHA3 consists of 17 exons and 16 introns and spans 375kb of genomic DNA. It is the second largest of the EPH genes after EPHA6.

Two alternatively spliced transcript variants have been described (NM_005233.5, a 5,807 nucleotide mRNA and NM_182644.2, a 2,684 nucleotide mRNA). The shorter transcript results in truncation within the extracellular domain of EphA3 and is predicted to produce a soluble protein. The 5 end of EPHA3 is associated with a CpG island, a feature common to all EPH genes. The EPHA3 promoter also lacks a TATA box and transcription initiates from multiple start sites.

The Eph receptors constitute the largest of the 20 subfamilies of human receptor tyrosine kinases. The founding member of this group was isolated originally from an erythropoietin producing hepatoma cell line. 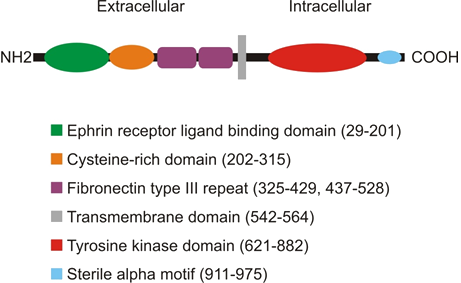 EphA3 was first identified as an antigen expressed at high levels (10,000-20,000 copies per cell) on the surface of the LK63 pre-B cell acute lymphoblastic leukaemia cell line. It also was found to be expressed by JM, HSB-2 and MOLT-4 T-cell leukaemic cell lines, in CD28-stimulated Jurkat cells, and in 16 of 42 cases of primary T-cell lymphoma (but not normal peripheral T lymphocytes nor in any subset of thymus-derived developing T cells). It is also present in patients with hematologic malignancies, including AML, CML, MDS, MPN and Multiple Myeloma, and in various solid tumours (see below)
EphA3 expression has been shown to be most abundant during vertebrate development, where it is highly regulated both temporally and spatially. Prominent EphA3 expression occurs in the neural system, including the retinal ganglion cells of the embryonic retina in a graded distribution from anterior/nasal (lowest) to posterior/temporal (highest); the cerebrum, thalamus, striatum, olfactory bulb, anterior commissure, and corpus callosum of the forebrain; and the medial motor column ventral motor neurons of the spinal cord; and extraneurally by mesodermally-derived tissues including the paraxial musculature, tongue musculature, submucosa of the soft palate, capsule of the submandibular gland, cortical rim of bone, thymic septae, media of the pharynx, trachea, great vessels, small intestine and portal vein, cardiac valves, and the renal medulla. In adult tissues EphA3 expression is more restricted and detected at significantly lower levels than during early development. However it is expressed on mesenchymal stromal progenitor cells (MSCs) during neovascularisation of the regenerating endometrium, with its expression regulated by hypoxia. Similarly EphA3 is expressed on MSCs recruited from the bone-marrow and contributing to the vasculature and supporting stromal tissue of various solid cancers . It is also over-expressed on progenitor cells in gliomas. In these instances EphA3 in tumours is largely inactive, and activation with an agonistic antibody inhibits tumour growth.
Loss of EphA3 expression is also reported in cancer. EPHA3 gene copy number and/or expression levels were decreased in lung cancers (157 of 371 primary lung adenocarcinomas), and also in esophageal squamous cell carcinoma (ESCC). Silencing of EPHA3 expression by DNA hypermethylation occurs in leukaemia , and in colorectal tumours carrying a BRAF mutation (V600E). Somatic mutations identified in the 3 untranslated region of EPHA3 may also disrupt miRNA target sites, thereby altering its expression .

Eph receptors modulate cell shape and movement through reorganisation of the cytoskeleton and changes in cell-cell and cell-substrate adhesion, and are involved in many cellular migration, sorting (tissue patterning) and guidance events, most often during development, and in particular involving the nervous system. There is evidence too that Eph receptor signalling influences cell proliferation and cell-fate determination and growing recognition that Eph receptors function in adult tissue homeostasis.
EphA3 is thought to play a role in retinotectal mapping, the tightly patterned projection of retinal ganglion cell axons from the retina to the optic tectum (or superior colliculus in mammals). In chicks, posterior retinal ganglion axons expressing highest levels of EphA3 project to the anterior tectum where the graded expression of ephrin-A2 and ephrin-A5 is lowest and are excluded from projecting more posteriorly where ephrin-A2/A5 expression is highest. More direct evidence of non-redundant function for EphA3 has come from phenotypic analysis of EphA3 knockout mice. Approximately 70-75% of EphA3 null mice die within 48 hours of birth with post-mortem evidence of pulmonary oedema secondary to cardiac failure. These mice exhibit hypoplastic atrioventricular endocardial cushions and subsequent atrioventricular valve and atrial membranous septal defects, with endocardial cushion explants from these mice giving rise to fewer migrating cells arising from epithelial to mesenchymal transformation. Expression of EphA3 in the spinal cord appears to be redundant as axial muscle targeting by medial motor column motor axons and the organisation of the motor neuron columns is not altered. EphA4 is the only other EphA receptor also expressed by developing spinal cord motor neurons and in mice lacking EphA3 and EphA4 these receptors together repel axial motor axons from neighbouring ephrin-A-expressing sensory axons, inhibiting intermingling of motor and sensory axons and preventing mis-projection of motor axons into the dorsal root ganglia. In contrast to the chick, EphA3 is not expressed by mouse retinal ganglion cells. Instead the closely related receptors EphA5 and EphA6 (see homology below) are expressed in a low nasal to high temporal gradient. However, if EphA3 is ectopically expressed in retinal ganglion cells in mice these axons project to more rostral positions in the superior colliculus.
A function for soluble EphA3 has not been reported although potentially this isoform might play a role in promoting cell adhesion (see above) or act as a tumour suppressor protein (see below). 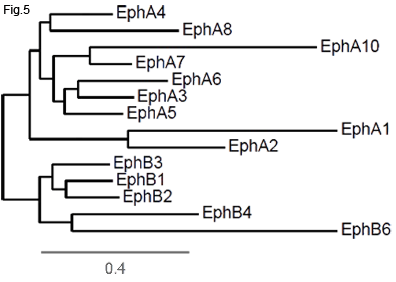 To date no germinal mutations in EPHA3 have been associated with disease.