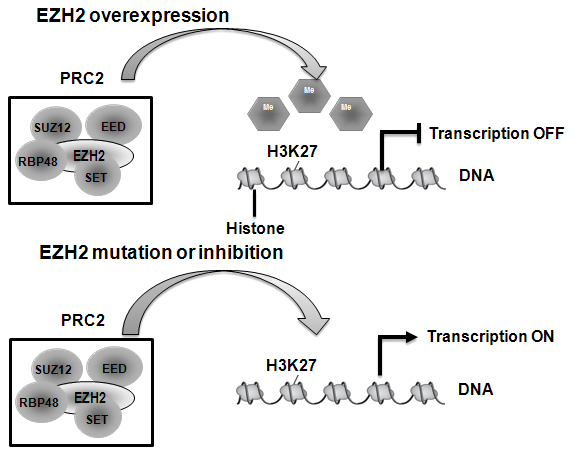 Figure 2. The interaction and effect of EZH2 in regulation of transcriptional repression. Polycomb complex 2 (PRC2) exerts methyltransferase activity to H3K27 via the SET domain of the EZH2 subunit.

The EZH2 gene is located on chromosome 7, starting from 148504464 and ends at 148581441 bp. This gene encodes a member of the Polycomb-group (PcG) family. PcG family members form multimeric protein complexes, which are involved in maintaining the transcriptional repressive state of genes.

EZH2 protein is the catalytic subunit of Polycomb Repressive Complex 2, one of the two-multimeric repressive complexes in the organization of the PcG.

PcG proteins act as an important epigenetic mediator that can repress gene expression by forming multiple complexes leading to trimethylation at lysine 27 of histone H3 (H3K27me3; Cao et al., 2002; Viré et al., 2006). On the one hand, EZH2 is a histone methyltransferase, which plays an important role in tumor development (Santos-Rosa and Caldas, 2005). Moreover, this protein might also play essential roles in the control of central nervous systems by regulating the dopamine receptor D4 (Unland et al., 2014).

Several mutations have been reported in EZH2 gene, which has been shown to be associated with different human diseases (e.g., Weaver syndrome, lymphoma and myeloid neoplasms). In particular, Morin and collaborators, found that the mutation of EZH2 Y641, within the SET domain, is correlated with poor prognosis in myeloid neoplasms. They observed various heterozygous mutations at Y641 in 7% of follicular lymphomas and 22% of diffuse large cell B-cell lymphomas of germinal center origin (Morin et al., 2010), which increased the level of H3K27me3 (Chase and Cross, 2011). Furthermore EZH2 mutations have not yet been reported in several other human diseases such as pancreatic ductal adenocarcinoma, but we cannot exclude that such somatic alterations might occur.
Moreover, more than 4941 single nucleotide variations (SNPs) have been reported in the EZH2 gene (31th of January 2014, dbSNP), such as rs193921147, rs193921148, rs397515547, rs397515548, rs734004, rs12670401, rs6950683 etc.