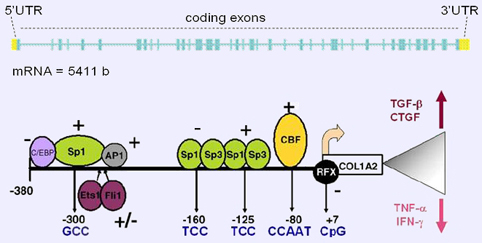 See figure summarizing basal transcription for COL1A2.
Cis-acting elements and trans-acting factors found within the proximal promoter, upstream enhancer and downstream repressor regions regulate the constitutive, cytokine-mediated and tissue-specific expression of this gene. The most 5 element around -300, is bound by C/EBP, Ets, AP1 and Sp1. This location contains the GCC-rich sequences which bind Sp1 and upon which COL1A2 promoter activity is highly dependent. Additionally, Ets1 and related Fli1, have differential effects on transcription within this region. Two TCC-rich boxes at -160 and -125 interact with Sp1 and Sp3. The TCC-rich box at -160 acts as a repressor and negatively modulates the downstream TCC-rich box as well as the upstream GCC-rich sequences. The CBF/NFY trimer is a transcriptional activator and binds to the canonical CCAAT motif at -80. RFX proteins bind the promoter at a methylation-sensitive CpG site at +7 and repress COL1A2 promoter activity.
The cytokine, TGF-β is an important regulator of tissue fibrosis and ECM remodeling and resides in the matrix as a latent complex until it is activated. TGF-β upregulates COL1A2 as well as CCN2/CTGF, PAI-1 and TIMP-1 thereby promoting matrix deposition. The TGF-β stimulation of the COL1A2 promoter depends on Sp1, Smad3 / Smad4 and the co-activators of p300/ CBP. In dermal fibroblasts, 5-Fluoruracil (5-FU) was shown to be an inhibitor of TGF-β / SMAD mediated COL1A2 transcription. The anti-fibrotic actions of TNF-α and IFN-γ result in the quenching of the TGB-β response as well as inhibiting the basal transcription of COL1A2.
The tumor suppressor p53, is a modulator of the COL1A2 gene. p53-dependent stress response genes were analyzed in normal cells and tissues that were irradiated against a background of differential p53 expression. In gamma irradiated fibroblasts, Komarova et. al. showed that COL1A2 was upregulated in a p53-dependent manner and functions as a growth repressor. Production of COL1A2 therefore may be partly responsible for the growth suppression that characterizes the "bystander effect" of p53-dependent gene therapy.
In studies using adenovirally-mediated Fli 1 siRNA in human dermal fibroblasts, reduction of Fli1 expression resulted in significant upregulation of both COL1A1 and COL1A2 genes, as well as proteins,and confirmed that Fli 1 is a repressor for collagen type 1. In comparison, TGFβ stimulation resulted in a 2-fold increase of the collagen mRNAs
Stuiver et al (1991) determined that the COL1A2 promoter contains a response element sensitive to the phorbol ester, TPA, an activator of PKC. TPA increased COL1A2 at the transcriptional and protein level only in TPA-responsive 3T3-L1 fibroblasts but not in VT-1 fibroblasts, a variant cell line that is non-responsive to TPA due to the inability of PKC translocation to the membrane.

One alpha2 chain pairs with two alpha1 chains to form the triple helix of type I collagen.

Type I collagen is an abundant structural component of healthy connective tissue. In addition, it is expressed by tumor stromal fibroblasts and vascular cells.

Type I collagen is a secreted extracellular matrix protein. It is a major structural component of cartilage, bone, dermis and tendons. In cancers, expression is typically seen by stromal fibroblasts and vascular cells infiltrating the tumor.

As a structural protein, type I collagen interacts with other matrix proteins including proteoglycans and fibronectin. By binding to the cell surface integrins alpha-1 / beta-1 and alpha-2 / beta-1 type I collagen can anchor cells into the matrix. In addition to its structural roles, type I collagen signaling to cells through its integrin receptors and other cell surface collagen receptors (CD36, inhibitory leukocyte-associated Ig-like receptor (LAIR)-1 (CD305), Endo180 (CD280), and discoidin domain receptors, DDR1 and DDR2) can regulate cell growth, motility, and differentiation.

Multiple independent mutations in COL1A2 occur in patients with osteogenesis imperfecta and in one form of Ehlers-Danlos syndrome. These mutations cause skeletal and cardiovascular defects but are not associated with malignancy.

In tumors from patients with esophageal squamous carcinoma, loss of heterozygosity was found at a 9% frequency for a nucleotide repeat in the promoter of COL1A2 and at a 12% frequency for a repeat in the first intron of the gene. The effect, if any, of these mutations on tumor progression remains unclear.
Epigenetic regulation of COL1A2 in cancer has been described. Aberrant methylation of COL1A2 was found in about half of primary hepatoma tissues examined.