The human TGFBR3 gene has two promoters, a proximal promoter and a distal promoter and produces a 4,2 kb mRNA. TGF-beta1 has been demonstrated to down regulate TbetaRIII expression through direct inhibition of the proximal TbetaRIII promoter. 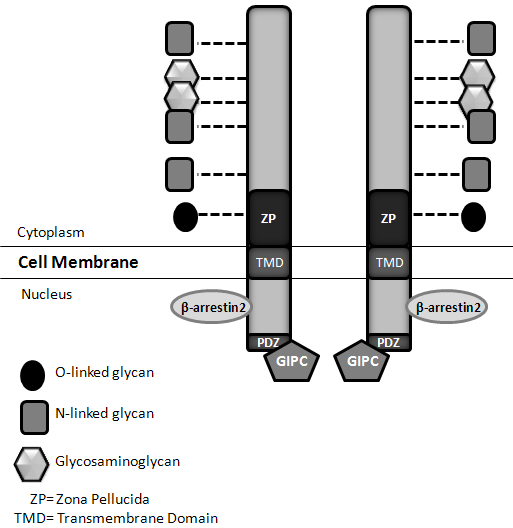 Structure of TbetaRIII. TbetaRIII consists of a large extracellular domain, which has multiple sites of glycan modification, including N- and O-glycans, and glycosaminoglycan side chains, a hydrophobic transmembrane domain, and a short cytoplasmic domain. TbetaRIII interacts with the scaffolding proteins beta-arrestin2, via phosphorylation of amino acid site Thr841 in the cytoplasmic domain, and with GIPC via the PDZ domain.

TbetaRIII is an 853 amino acid transmembrane proteoglycan, which contains a short 41 amino acid cytoplasmic domain. TbetaRIII is a proteoglycan, with glycosaminoglycan (GAG) side chain modifications (S535 and S546) composed of heparin and chondroitin sulfate. The TbetaRIII core has predicted molecular weight of 100 kDa, however fully processed TbetaRIII migrates at an apparent molecular weight of 180 to 300 kDa due to these glycosaminoglycan post-translational modifications. TbetaRIII contains a class I PDZ binding motif and a beta-arrestin2 interacting motif in the cytoplasmic domain, as well as a ZP-1 (zona pellucida) domain in the extracellular domain. The cytoplasmic domain of TbetaRIII is phosphorylated by TbetaRII. TbetaRIII also undergoes ectodomain shedding to produce soluble TbetaRIII (sTbetaRIII).

TbetaRIII exists as a transmembrane protein in the cell membrane and as a secreted protein, known as soluble TbetaRIII (sTbetaRIII), which can be detected in the extracellular matrix and serum.

TbetaRIII is a member of the TGF-beta superfamily signaling pathways, which have essential roles in mediating cell proliferation, apoptosis, differentiation, and migration in most human tissues. TbetaRIII is the most abundantly expressed TGF-beta superfamily receptor and functions as a TGF-beta superfamily co-receptor, by binding the TGF-beta superfamily members, TGF-beta1, TGF-beta2, or TGF-beta3, inhibin, BMP-2, BMP-4, BMP-7, and GDF-5 and presents these ligand to their respective signaling receptors to activate or repress (in the case of inhibin) TGF-beta1, BMP, or activin signaling to the Smad transcription factors. For example, in the case of TGF-beta1, 2, or 3, TbetaRIII presents ligand to the TGF-beta type II receptor (TbetaRII). Once bound to ligand, TbetaRII then recruits and transphosphorylates the TGF-beta type I receptor (TbetaRI), activating its kinase function and leading to the phosphorylation of Smad2/3. Phosphorylation of Smad2 and Smad3 leads to formation of a complex with Smad4, and accumulation of this complex in the nucleus, where along with co-activators and co-repressors they regulate the transcription of genes involved in proliferation, angiogenesis, apoptosis, and differentiation. In addition to regulating receptor mediated Smad signaling, TbetaRIII also mediates ligand dependent and independent p38 pathway signaling. TbetaRIII can also undergo ectodomain shedding to generate soluble TbetaRIII (sTbetaRIII), which binds and sequesters TGF-beta superfamily members to inhibit their signaling. Although sTbetaRIII expression has been demonstrated to correlate with the cell surface expression of TbetaRIII, little is known about the regulation of sTbetaRIII production. TbetaRIII shedding may be mediated in part by the membrane type matrix metalloproteases (MT-MMP) MT1-MMP and/or MT3-MMP, and plasmin, a serine proteinase which has been shown to cleave the extracellular domain of TbetaRIII. In addition, TbetaRIII shedding is modulated by pervanadate, a tyrosine phosphatase inhibitor. Supporting this, TAPI-2, a MT-MMP and ADAM protease inhibitor, has been shown to inhibit TbetaRIII shedding. The regulation of TbetaRIII expression is sufficient to alter TGF-beta signaling. The cytoplasmic domain of TbetaRIII interacts with GIPC, a PDZ-domain containing protein, which stabilizes TbetaRIII cell surface expression and increases TGF-beta signaling. The interaction between TbetaRIII and GIPC also plays an important role in TbetaRIII mediated inhibition of TGF-beta signaling, cell migration, and invasion during breast cancer progression. The cytoplasmic domain of TbetaRIII is phosphorylated by TbetaRII, which results in TbetaRIII binding to the scaffolding protein beta-arrestin2. The TbetaRIII/beta-arrestin2 interaction results in the co-internalization of beta-arrestin2/TbetaRIII/ TbetaRII and the down-regulation of TGF-beta signaling. The interaction between TbetaRIII and beta-arrestin2 regulates BMP signaling as well as TGF-beta signaling. TbetaRIII complexes with ALK6, a BMP type I receptor, in a beta-arrestin2 dependent manner to mediate the internalization of ALK6 and stimulation of ALK6 specific BMP signaling events. Through its interaction with beta-arrestin2, TbetaRIII negatively regulates NFκ-B signaling in the context of breast cancer, regulates epithelial cellular adhesion to fibronectin, fibrillogenesis, and focal adhesion formation via regulation of alpha5beta1 internalization and trafficking to nascent focal adhesions, activates Cdc42, to alter the actin cytoskeleton and suppresses migration in normal and cancerous ovarian epithelial cells. During development, TbetaRIII has an important role in the formation of the atrioventricular cushion in the heart. Consistent with an important role for TbetaRIII during development, TGFbetaR3 null mice are embryonic lethal due to heart and liver defects. TGFbetaR3 has been recently identified as a tumor suppressor in multiple types of human cancers, including breast, lung, ovarian, pancreatic and prostate cancer. The loss of TGFbetaR3 in these cancer types correlates with disease progression, and results in increased motility and invasion in vitro and increased invasion and metastasis in vivo.

There is a high rate of rearrangements at the TGFBR3 locus in myxoinflammatory fibroblastic sarcomas (MIFS) and hemosiderotic fibrolipomatous tumors (HFLT). Mutations in TbetaRIII have not been found in other human cancers.