In humans, RNF11, the gene coding for RNF11, is located on human chromosome 1p32.3. The coding sequence spans more than 37 kb of genomic DNA, in the telomere-to-centromere orientation.

The coding region of RNF11 is subdivided in 3 exons and includes additional 0,5 and 2,2 kb of 5 and 3 UTR regions, respectively. The open reading frame includes 465 bp and codes for a protein of 154 amino acids. A very rare transcript encoding a sequence lacking exon 2 has been identified (Kitching et al., 2003). RNA is expressed at low levels in lung, liver, kidney, pancreas, colon, spleen, prostate, thymus, ovary, small intestine and peripheral blood lymphocytes; stronger expression is observed in testes, heart, brain and placenta, while the highest level of RNF11 mRNA is in the skeletal muscle (Kitching et al., 2003). In tumor cell lines the strongest expression of the RNF11 transcript was reported in LnCAP prostate and HTB126 breast tumor cells (Kitching et al., 2003). In human brain RNF11 mRNA is detectable at similar levels in frontal cortex, striatum, hippocampus, pons and medulla (Pranski et al., 2012b). A functional consensus Ets1 transcription factor binding site (EBS) is conserved in the human and mouse RNF11 promoter and data suggest a role of Ets1 factor in RNF11 expression during embryonic bone formation (Gao et al., 2005). The presence of a miR-19 target site in 3 UTR of RNF11 mRNA has been reported. Moreover, it has been demonstrated that miR-19b levels are inversely related with endogenous RNF11 mRNA levels (Gantier et al., 2012; Kumps et al., 2013), clearly indicating an important role for RNF11 in the effect of miR-19b on NF-κB signaling.

No human pseudogene for RNF11 has been identified.

Cartoon representation of domain organization of RNF11. The WW-binding motif (PPPY) and the RING domain are shown. The asterisks (*) represent the acylated residues, Gly2 and Cys4 respectively.

The expression of this gene has been shown to be induced by mutant RET proteins (MEN2A/MEN2B). The germline mutations in RET gene are known to be responsible for the development of multiple endocrine neoplasia (MEN). The expression of RNF11 was also induced in TGW human neuroblastoma cells in response to glial cell line-derived neurotrophic factor stimulation (Watanabe et al., 2002). RNF11 is overexpressed in invasive breast cancers, in adenocarcinomas of the pancreas, colon cancer and in bladder tumors (Subramaniam et al., 2003). Intense RNF11 expression was observed in osteoblasts in the mandible, calvarial bones and in the periosteal layer of developing endochondral bones of mouse embrios, while was undetectable in cartilage tissue at any stage of development. The expression of both the RNF11 mRNA and protein was higher in the immature osteoblast than in the mature osteoblast (Gao et al., 2005). RNF11 is variably expressed in neurons and excluded from white matter (Anderson et al., 2007).

RNF11 is primarly cytoplasmic (early endosome, recycling endosome). Nuclear localization has been detected following phosphorylation by PKB/AKT1 (Connor et al., 2005). The intracellular localization is dependent on the interaction of RNF11 with the GGA protein family of clathrin adaptors, involving the recognition of an N-terminal di-leucine motif in RNF11 by the VHS domain of GGA1 (Santonico et al., 2010).

Belongs to the RING E3-ligase protein family. RNF11 interacts with UbcH5 a, b and c, and with Smurf2. The interaction causes ubiquitination of both RNF11 and Smurf2. RNF11 bound to Smurf2 can prevent Smurf2-mediated ubiquitination of the TGFbeta receptor (Azmi and Seth, 2005); accordingly, the overexpression of RNF11 in transfected tumor cells can restore TGFbeta responsiveness (Subramaniam et al., 2003) while RNF11 knock-down abrogates the TGFbeta signal (Colland et al., 2004). RNF11 directly enhances TGF-beta signalling by binding Smad4, the common Smad for TGF-beta, activin and BMP signalling and increasing and/or stabilizing Smad4 steady-state levels (Azmi and Seth, 2009). RNF11 binds WWP1, interfering with its function, and it cooperates with Smurf2 to degrade the de-ubiquitinating enzyme AMSH thus up-regulating EGFR and TGF-beta signalling (Chen et al., 2008; Li and Seth, 2004). RNF11 is an essential component of the A20 ubiquitin-editing complex, comprising also RIP1, ITCH and TAX1BP1, which ensures the transient nature of inflammatory signaling pathways (Jacque and Ley, 2009; Shembade et al., 2009; Verstrepen et al., 2010). RNF11 promotes the association of A20 to RIP1 in a TNF-dependent manner, leading to the inactivation of key signaling molecules. A20 deubiquitinates Lys-63 polyubiquitin chains on RIP1 and catalyzes the formation of Lys-48-polyubiquitin chains. This leads to RIP1 proteosomal degradation and consequently termination of the TNF- or LPS-mediated activation of NF-kappa-B (Jacque and Ley, 2009; Shembade et al., 2009). RNF11 has been shown to be involved in the regulation of EGFR degradation in the lysosomal compartment, by interacting with SARA and Hrs, both reported to be regulators of endocytic trafficking, on early-, late- and recycling endosome compartments. Data demonstrate that RNF11 and SARA participate structurally and functionally in the ESCRT-dependent lysosomal degradation of EGF receptor (Kostaras et al., 2012).

An A to G transition (c124-2A>G) mutating the intron 1 acceptor splice site of the RNF11 gene has been identified in bovine RNF11 gene. The RNA product corresponds to a transcript skipping exon 2 and with a frameshift appending illegitimate residues. The protein product is severely truncated (41/154 amino acids) and misses the RING-finger domain (Sartelet et al., 2012).

Entity name
Various cancers
Note
RNF11 is overexpressed in invasive breast cancers, in adenocarcinomas of the pancreas, colon cancer and in bladder tumors (Burger et al., 2006; Subramaniam et al., 2003).
Entity name
Breast cancer
Note
A direct involvement of RNF11 in oncogenesis has not been clearly established. Nevertheless, it has been shown that RNF11 competes with Smad7 in the interaction with Smurf2. Smurf2/Smad7 complex ubiquitinates TβRI leading to degradation of the receptor and TGFβ resistance in cancer cells, thus the interaction of RNF11 with Smurf2 could be important to restore TGFβ signalling. Furthermore, RNF11 also directly interacts with Smad4 and enhances its trans-activation potential (Azmi and Seth, 2005). On the other side, it has also been suggested that RNF11 could stimulate the positive effects of the TGFβ signalling on later tumor progression and metastasis (Subramaniam et al., 2003). Other evidences of a putative function of RNF11 in oncogenesis come from the observation that RNF11 interacts with several proteins, such as E3 ubiquitin ligases and deubiquitinating enzymes, that are involved in oncogenesis. Among them, AMSH (associated moleculate with the SH3 domain of STAM) interacts with RNF11 and has been shown to upregulate BMP/ TGFβ signalling pathway by binding to Smad6 and Smad7. The interaction with RNF11 promotes AMSH degradation, probably mediated by Smurf2/RNF11 complex and therefore abrogates the positive effects of AMSH on TGFβ signalling, leading to cell proliferation and malignant progression. 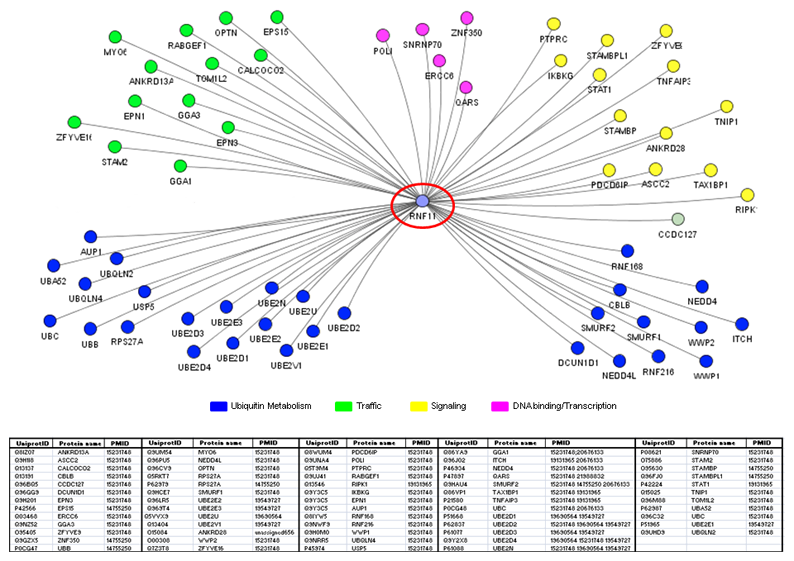 The RNF11 human interactome. RNF11 is involved in direct/enzymatic or indirect interactions with several proteins. The RNF11 human interactome is drawn according to MINT database. RNF11 interactors are clustered according to common biological function. The table below shows the Uniprot code and protein name of each RNF11 binding partner in the interaction network and the PubMed identifier (PMID) describing the interaction. The interactome browser mentha has been used to obtain the graphical representation (mentha: a resource to browse integrated protein interaction networks. In press; http://mentha.uniroma2.it/browser/index.html?ids=Q9Y3C5&org=9606).
Entity name
Parkinsons disease (PD)
Note
The gene RNF11 is contained within PARK10 and produced a signal of altered expression in PD brains (Noureddine et al., 2005). Moreover, in Parkinson disease, RNF11 is sequestered in Lewy bodies and neuritis. RNF11 is expressed by vulnerable neurons of the substantia nigra and it is involved in the protein degradation pathway mediated by the ubiquitin-proteasome system (UPS), which has been repeatedly suggested as relevant in the etiology of PD (Anderson et al., 2007). RNF11 has been shown to modulate NF-κB signaling in neuroblastoma cells and in primary cortical neurons, indicating a critical role in the regulation of regulating the inflammatory signaling in the central nervous system. Accordingly, depletion of RNF11 increases production of the inflammatory cytokine MCP-1 following TNF-α; activation, resulting in aberrant regulation of inflammatory signaling (Pranski et al., 2012a). Moreover, RNF11 has been shown to be a negative regulator of NF-κB signaling in microglial cell lines and confers protection against LPS-induced cell cytotoxicity (Dalal et al., 2012). Finally, loss of RNF11-mediated inhibition of NF-κB signaling in dopaminergic cells is protective against 6-OHDA toxicity and promotes neuronal survival (Pranski et al., 2013). The effects observed following the reduced expression of RNF11 or the expression of functionally compromised mutants suggest that RNF11 may have a role in neurodegenerative disease pathogenesis and progression.
Entity name
Alzheimer disease
Note
RNF11 is sequestered in Lewy bodies in human brains with Alzheimer disease with Lewy pathology.
Entity name
Regulation of the inflammatory response
Note
The splice site variant caused by the A to G transition c124-2A>G has been shown to compromise growth and regulation of the inflammatory response in Belgian Blue Cattle (Sartelet et al., 2012). RNF11 has been shown to negatively regulate NF-κB signaling in human monocytic cell lines by interacting with the A20 ubiquitin-editing complex. Accordingly, depletion of RNF11 causes aberrant regulation of inflammatory signaling (Shembade et al., 2009). Endogenous RNF11 mRNA levels have been reported to be inversely related with miR-19b levels (Gantier et al., 2012; Kumps et al., 2013), clearly indicating an important role for RNF11 in the effect of miR-19b on NF-κB signaling. Finally, RNF11 has been shown to act as negative regulator of the RIG-I/MDA5 pathway and virus-induced IFN-beta production (Charoenthongtrakul et al., 2013).