Review on i(18)(q10) in haematological malignancies, with data on the genes involved.

i(18)(q10) is found in 1.5% of DLBCL cases with an abnormal karyotype. Microarray DNA comparative genome hybridization studies have demonstrated that the incidence of 18q11.2-23 gains are 54% in the activated B-cell-like DLBCL and suggested that i(18q) is possibly much more frequent in this subtype of DLBCL (Nedomova et al.,2013). In BCL2 expressing germinal center B-cell-like DLBCL, the 18q11.2-23 gains were found more frequently in Chinese than in Western cases (Chen et al.,2010). Sex ratio of the cases with i(18q) is significantly unbalanced, near M:F=1.8:1 and the anomaly was observed mostly in older patient (average age 59.6 years; range 17-84).

As a result of duplication (single copy of i(18q)) or amplification (supernumerary i(18)(q10) ) of 18q, the expression of the genes located in the regions of the long arm of chromosome 18 are deregulated. Both genes BCL2 and NFATC1 located in 18q21 and 18q23 respectively contribute to the pathogenesis of DLBCL (Nedomova et al., 2013):

Prognosis of patients with i(18)(q10) is poor and this seems to be related to the additional copies of BCL2 oncogene (located in 18q21) leading to overproduction of BCL2 protein (Lu et al.,2015).

In 7 cases i(18q) is found in complex karyotypes. In one case it was a second event appearing after clonal evolution of the disease, and in one it was a sole anomaly. In all cases except one i(18q) is presented with one copy in the karyotype. The case with supernumerary i(18)(q10) is associated with +18 and the final number of the copies of i(18q) in this case is 9. In 5 cases (56%) i(18q) is associated with sex chromosome abnormalities (one with structural aberration, two with -X and two with -Y).

A candidate gene possibly linked to the pathogenesis of the cases with ATL and i(18q) is PTPN2 (mapped on 18p11.21). The protein encoded by PTPN2 (Tyrosin-protein phosphatase non-receptor type2) is a member of the protein tyrosine phosphatase family that functions as a negative regulator of multiple signaling pathways including IL2 (interleukin 2) mediated JAK/STAT cascade. PTPN2 is inactivated by nonsense mutation in 5% and deleted in 6% of the cases with adult acute T-cell lymphoblastic leukemia (Kleppe et al.,2010; Kleppe ae al.,2011). At the same time deregulation of JAK/STAT pathway is a frequent event in ATL (Takemoto et al.,1997) and one of the reason for this could be 18p deletion, respectively loss of PTPN2 as a result of i(18q).

It is not clear if there is a difference of the prognosis between the cases with ATL carrying i(18q) and the cases without the anomaly because of the small number of the reported cases with i(18q).

i(18)(q10) is found in 0.3% of FL cases with an abnormal karyotype. The anomaly is described predominantly in males (4 males and one female).

Prognosis is unclear because of the very small number of cases.

The additional copy of BCL2 may be related to the pathogenesis of the disease.

Prognosis is unclear because of the very small number of cases.

In all cases of this heterogeneous group of diseases except one (with isolated i(18q) in case of MALT lymphoma), i(18q) is found in complex karyotypes as a single copy. In one case of hypotetraploid type of MM i(18q) is associated with a 14q32 rearrangement and the case with MCL with t(11;14)(q13;q32).

i(18q) was found in 6 cases (0.07% of all cases with an abnormal karyotype) with acute myeloid leukemia (AML) - 2 with M2 French-American-British (FAB) phenotype and 4 with AML, NOS. In one case i(18q) was observed in polycythemia vera (unpublished case). The AML patients are predominantly males (5 males and one female) and are with an average of 50.3 years (range 11- 78).

In all AML cases i(18q) is presented as a single copy in a complex karyotypes and is associated with numerical or structural abnormalities of chromosome 5 or 8. The i(18q) was found in the case of PV as an isolated anomaly and was associated with mutation of JAK2 gene.

The molecular pathogenesis of i(18q) in the cases with AML is unknown. This anomaly may be accepted as a variant of the unbalanced der(9;18)(p10;q10) found in JAK2 positive cases with PV and AML following post polycythemic myelofibrosis (Bacher and Haferlach,2006). It is known that the downregulation of PTPN2 expression (located in 18p11.21) is due to increased activation of JAK/STAT pathway particularly in the cases with JAK2 mutation. That is why it is logical to suppose that PTPN2 deletions as a result of i(18q) are responsible for the progression of the JAK2 positive chronic MPD.

Isochromosome 18q is an unbalanced structural abnormality in which the short arm is lost and the remaining long arm is duplicated resulting in a chromosome consisting of two identical long arms. i(18)(q10) is a rare chromosome aberration found in a large spectrum of hematological malignances (61 cases), most frequently in older patients (average age 58.3 years) with complex karyotypes. The anomaly was described predominantly in lymphoproliferative disorders (54 cases), but a small number of cases with myeloid malignances and i(18q) were also reported. Isochromosome 18q resulted in a decrease and increase in gene dosage from the monosomy of the 18p arm and trisomy of the 18q arm, respectively. 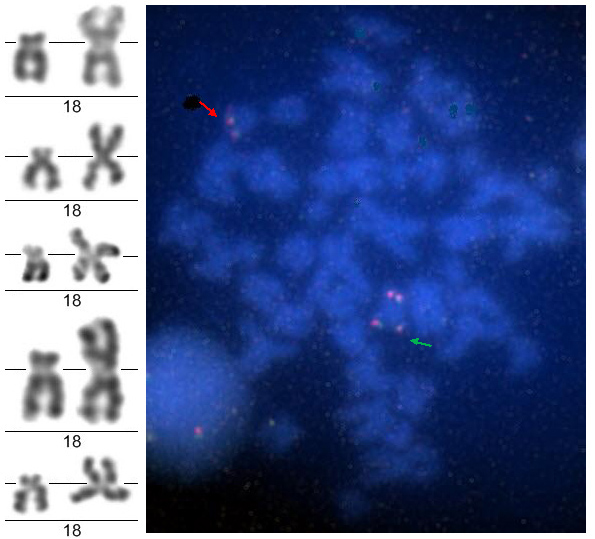