Follicular lymphomas of germinal center (B- or T-cell) origin 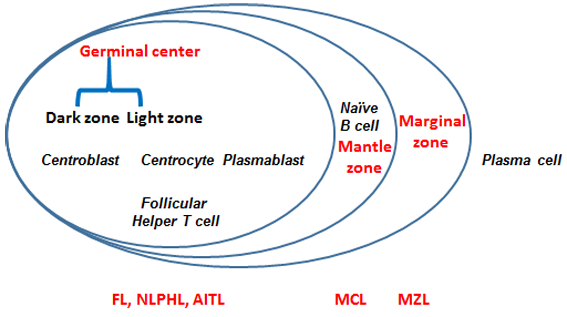 Figure 1. Schematic figure of a lymphoid follicle with its "zones" and the related lymphomas. Lymphomas are placed on the follicular zones according to the location of the putative normal counterpart of the tumor cells. GC-derived lymphomas include both B-cell (Follicular lymphoma [FL], nodular lymphocyte predominant Hodgkin lymphoma [NLPHL]) and T-cell (angioimmunoblastic T-cell lymphoma [AITL]) lymphomas.

Progression and transformation
FL is the most common subtype of indolent lymphomas. It is characterized by relapses and remissions, usually controlled by Rituximab. On clinical progression, whether FL histology remains indolent or has become aggressive is an important issue: the relevant salvage therapy is selected based on histology, and a watchful waiting strategy can be adopted if the histology remains indolent (Tomita, 2017). It has been reported that 30-40% of FL cases transform into an aggressive lymphoma (tFL) with a poor prognosis (Bouska et al., 2017). An analysis of lymphoma cell specimens at histological transformation has identified multiple transformation-associated abnormalities, such as MYC upregulation, TP53 mutation and changes in the tumour microenvironment (Kahl and Yang, 2016). Transformation to aggressive lymphoma is a critical event in the clinical course of patients affected by FL. Yet, it is a challenge to reliably predict transformation at the time of diagnosis. However, we are currently lacking a prognostic index that would specifically address transformation rather than disease progression or overall survival (Kridel et al., 2017).
Regarding NLPHL, clinic and pathologic observations have demonstrated that it may evolve to a completely diffuse T-cell-rich proliferation resembling a THCRLBCL. The 2016 revision of WHO classification has recommended the designation of these cases as THCRLBCL-like transformation of NLPHL (Swerdlow et al., 2016).
Clinical features of AITL are reported in the specific article/section of the Atlas of Genetics and Cytogenetics in Oncology and Haematology.

Modified and adapted from Taylor et al., (2017).
Genetic features of NLPHL are reported in the specific article/section of the Atlas of Genetics and Cytogenetics in Oncology and Haematology.
Recurrent genetic abnormalities in AITL include TET2, IDH2, DNMT3A, RHOA, and CD28 mutations, as well as gene fusions such as ITK/SYK or CTLA4 / CD28 (Leclaire Alirkilicarslan et al., 2017). All these abnormalities have a role in the process of lymphomagenesis and may represent the target of tailored therapies (reviewed in Swerlow et al., 2016).

Follicular lymphomas of germinal center (B- or T-cell) origin