Review on Blastic Plasmacytoid Dendritic Cell Neoplasm (BPDCN), with data on clinics, and the genes involved.

Blastic plasmacytoid dendritic cell neoplasm (BPDCN) is a rare and aggressive hematologic neoplasm. Despite its rarity, there is extensive historic and scientific literature. Since 1994, when this neoplasm was first described (Adachi et al., 1994), BPDCN has been known with various names, including agranular CD4+ natural killer (NK) leukemia, CD4+/CD56+ hematodermic neoplasm, and blastic NK lymphoma (Facchetti et al., 2009; Pilichowska et al., 2007; Petrella et al., 2005; Assaf et al., 2007). In 2008, the WHO has placed this neoplasm in the category of acute myeloid leukemia (AML) and related precursor neoplasms (Facchetti et al., 2008; Swerdlow et al., 2008) following the realization that BPDCN results from the clonal proliferation of immature plasmacytoid dendritic cells (PDC) (Facchetti et al., 2008). In normal situations, the PDC are an essential part of the innate adaptive immunoresponse (Jegalian et al., 2009; Reizis et al., 2011). These cells respond to viral and bacterial infection by producing alpha-interferon. As such, they are also known also as alpha-interferon producing cells or plasmacytoid monocytes. Expansion of the normal PDCs can occur in autoimmune disorders, as well as Hodgkin lymphoma, and various carcinomas. Flow cytometry and immunohistochemistry studies have revealed that the neoplastic PDC of virtually all patients are typically found in the CD45dim blast gate region and are phenotypically defined by the co-expression of CD4, CD56, and CD123, absence of CD34, and lack of specific myeloid-, T-, B-, or NK-lineage markers (Pagano et al., 2013). Very rarely CD56 might not be expressed. In those cases, the expression of CD4, CD123, and TCL1 would be sufficient to suspect BPDCN (Herling et al., 2003). Approximately 50% of the cases might also express CD43, CD45RA, and CD68. Other markers observed less frequently include CD7, HLA-DR, TCL1, CD33, BDCA2/CD303, BDCA4/CD304, CLA, and MxA (Petrella et al., 2004; Pilichowska et al., 2007).

BPDCN is quite rare; less than 100 cases have been reported so far. The disease does not have a geographic predilection as it has been observed in various countries around the world (Tsagarakis et al., 2010; Qayoom et al., 2015; Assaf et al., 2007). The exact incidence might be difficult to determine due to the various definitions of BPDCN as a leukemia or a skin lymphoma prior to the 2008 WHO inclusion of this neoplasm into the AML and related precursors neoplasms (Facchetti et al., 2008). Recent reports in the incidence, indicate that this neoplasm accounts for 0.4% of all hematologic neoplasms, 0.7% of the primary cutaneous lymphomas, and less than 1% of all acute leukemias (Facchetti et al., 2008; Riaz et al., 2014; Rossi et al., 2006; Pagano et al., 2013). BPDCN has been described in all age groups, but is most common in adults; the majority of patients are older adults and the median age at diagnosis is 65 years. Some patients are younger than 40 years old, and even children with this neoplasm have been reported. The male to female ratio is 3:1.

The first symptom in most patients with BPDCN is the presence of multiple cutaneous lesions, often detected incidentally by dermatologists (Gera et al., 2014). As such, histologic diagnosis is required to distinguish BPDCN from other primary skin lesions or other leukemias and lymphomas characterized by cutaneous involvement (Gera et al., 2014). At the same time, or soon after, involvement of bone marrow and/or peripheral blood occurs. This involvement is thought to occur in approximately 90% of the cases. Lymph nodes might also be involved (approximately 50% of the cases). Overt leukemia is a common feature of BPDC during progression or relapse, often with a myelomonocytic phenotype, and is nearly always present in the terminal stage of the disease. However, a minority of patients (5-10% of cases) do not have cutaneous lesions, but present with a very aggressive (fulminant) leukemia (Wang et al., 2012; Rauh et al., 2012; Qayoom et al., 2015). In addition to the typically sites of involvement, other unusual sites might be also affected. Paluri et al. (2015) reported a patient diagnosed with a BPDCN confined to the sinonasal region and central nervous system (CNS). Although CNS is not typically considered a common site of involvement for BPDCN, a recent study has reported a frequent CNS involvement in their group of patients suggesting that the CNS might be a safe reservoir of blast cells in patients with leukemic presentation, due to the fact that drugs are unable to cross the blood-brain barrier (Martin-Martin et al., 2016). Regardless of the presentation, the overall prognosis for patients with BPDCN is unfavorable, with a median overall survival of approximately one year (Facchetti et al., 2008; Julia et al., 2013). In children, BPDCN is characterized by less frequent cutaneous involvement and a significant response to intensive acute lymphoblastic leukemia (ALL)-type chemotherapy, allowing patients to reach complete remission. The overall prognosis and long-term survival in pediatric patients is better than in adults. Some reports made the suggestion that childhood BPDCN might represent a different neoplasm than the one seen in adults (Jegalian et al., 2010; Rossi et al., 2006). 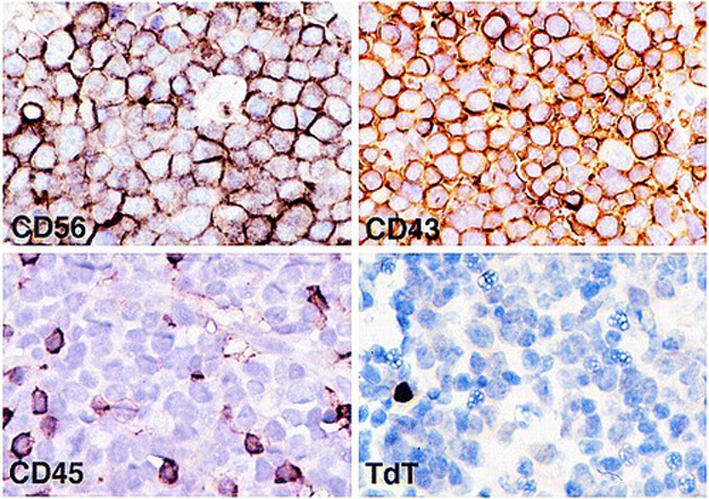 Examination of BPDCN patients with skin presentation reveals that the neoplasm involves the entire dermis and may extend to the subcutis, but not the epidermis (Gera et al., 2014. When the bone marrow is affected, there is a variable degree of involvement with variable dysplasia. The lymph nodes show a diffuse interfollicular and medullary involvement. Microscopic examination of the skin biopsy typically shows a diffuse monotonous infiltrate of intermediate-sized blast cells with round to oval nuclei and nucleoli, and scant agranular cytoplasm that resemble myeloid blasts, but with NK cell lineage differentiation (Ferreira et al., 2016; Ru et al., 2014). Intracytoplasmic microvacuoles are present in the majority of cases (Ferreira et al., 2016). The mitotic activity is variable. 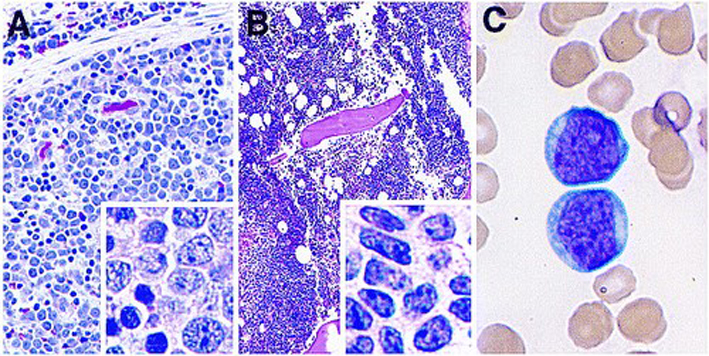 BPDCNA is an aggressive neoplasm with a median survival of approximately 12 months and typically poor response to chemotherapy (Facchetti et al., 2008; Julia et al., 2013). Patients with the leukemic form of the neoplasm have a shorter survival (approximately 8 months) (Riaz et al., 2014). Since skin presentation occurs in the majority of patients, the first therapeutic approach is targeted to treat the skin lesions. There is no specific induction therapy designed specifically to treat this neoplasm. Patients have been treated with existing therapies typically used for non-Hodgkin lymphoma, AML, and ALL (Falcone et al., 2016). Various AML and ALL therapeutic protocols have been used. The AML protocol consists of variable combinations of cytarabine, etoposide, idarubicin, anthracycline, fludarabine, and filgrastim, whereas the ALL protocol includes variable combinations of cyclophosphamide, vincristine, doxorubicin, dexamethasone, methotrexate, cytarabine, prednisone, asparaginase, and CHOP with and without etoposide (Pagano et al., 2013). Approximately 90% of patients seem to respond initially to these therapies, but the disease later recurs in the majority of patients (Bayerl et al., 2002). However, Voelkl et al. (2011) reported an elderly patient with BPDCN with AML presentation and skin lesions who achieved a 26 month long remission after treatment with dose intensive multiagent chemotherapy. Long lasting remissions might occur in pediatric patients with good response to acute leukemia chemotherapy and allogeneic stem cell transplantation (Paluri et al., 2015; Male et al., 2010). Several studies have demonstrated that allogeneic stem cell transplantation following a reduced intensity conditioning (avoidance of high-dose therapy) offers the best chance for long lasting remission, particularly when performed during the first complete remission, and suggests that this form of therapy should be pursued aggressively for all BPDCN patients (Dietrich et al. 2011; Roos-Weil et al., 2013; Aoki et al., 2015). There are also clinical trials presently being conducted that are showing promising results. One of these trials consists in the administration of a single cycle of therapy of SL-401. This is a recombinant human interleukin 3a protein conjugated with truncated diphtheria a-toxin DT388-IL3, a potent inhibitor of protein synthesis (Stemline Therapeutics) (Frankel et al., 2014; Fitzgerald et al., 2014). The other clinical trial consists of a targeted therapy against CD56+ tumors. The drug in in this case is lorvotuzumab mertansine, which has been used to targets other hematologic neoplasms that express CD56 (Whiteman et al., 2014). 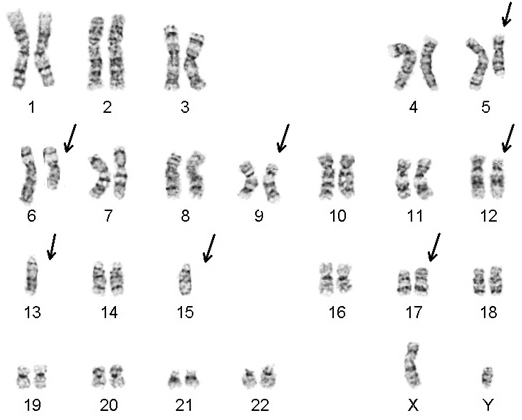