The GFI1B gene structure is composed of at least 7 exons (ranging from 120 to 824 bp), six of which are coding. Spliced ESTs and human mRNAs may define up to eight additional 5exons which possibly point to an alternative promoter close to the promoter of TSC1.

Two human mRNA transcripts arise from alternative splicing. GFI1B mRNA variant one encodes the more frequent full length GFI1B (330 aa), while variant two lacks the in frame exon 5 (according to the NCBI RefSeq for hGFI1B) leading to a shorter isoform (284 aa) lacking zinc-finger two and parts of zinc-finger one and three. The residual parts of Znf one and three are joined to form a new zinc-finger (see mRNA and protein below).

The longer GFI1B variant 1 is the protein refered to in most cases. GFI1B variant 2 shows only a restricted expression in normal cells and could be preferentially associated with leukemic diseases. Functional differences between both proteins are not described yet. 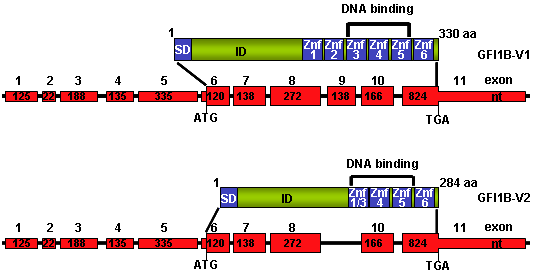 Model for the generation of the two major GFI1B isoforms. GFI1B-V2 is translated from a shorter mRNA splice variant where exon 9 is skipped (aa 171-216 missing). There are many potential 5 transcriptional start sites, but the major start site seems to be in exon 5, corresponding to exon 1 (122 bp) in the RefSeq database.
SD: SNAG domain necessary for repression of transcription by GFI1B.
ID: Intermediary domain with very low homology to the GFI1B homolog GFI1 and unknown function, which is presumably important for specific protein-protein interactions unique to GFI1B.
Znf 1-6: C2H2 zinc-finger domains which are highly conserved between all members of the GFI1 protein family. Znf 3-5 bind to the major groove of target DNA. Znf 4-5 of GFI1B (almost identical to GFI1) recognize a AATC DNA core sequence in the GFI1/GFI1B predicted binding site.

GFI1B (isoform 1) is a protein of 330 aa residues and has a predicted molecular mass of 37492.38 Da. Isoelectric point: 9.3076, charge: 25.0, average residue weight: 113613.
GFI1B is composed of a 20-amino-acid N-terminal SNAG (SNAIL-GFI) transcription repressor domain, and intermediary domain of largely unknown function and six c-terminal C2H2 zinc-finger domains encompassing residues 163-327. Zinc-fingers 3-5 are involved in sequence specific DNA binding and recognize a taAATCaca/tgca/t core motif. The bases flanking the AATC core motif seem to be poorly conserved. Predictions of true GFI1B binding sites in the genome based only on this sequence have to be validated independently.

GFI1B is mainly expressed in the fetal and adult hematopoietic system, where it is detected in hematopoietic stem cells, megakaryocyte/erythroid precursors (MEP), common myeloid precursors (CMP), erythroblasts and early erythrocytes, megakaryocytes and megakaryocyte precursors, B-cell precursors and a small subset of T-cell precursors (Vassen et al., 2007). GFI1B is lso detected in fetal thymus and testes. GFI1B expression varies throughout the maturation of these cells, with the highest expression levels in MEPs, megakaryocytes and erythrocytes and seems to be tightly regulated. The shorter isoform 2 of GFI1B is lowly expressed in normal cells, but upregulated in several types of leukemia (e.g. chronic myelogenous leukemia, acute myeloid leukemia, erythroleukemia, megakaryocytic leukemia). The expression of GFI1B is described to be positively regulated by GATA-1, NF-Y, E2-alpha/TCF3, and HMGB2 and to be repressed by Oct1, GFI1B and GFI1. GFI1B expression is down-regulated by erythropoietin (EPO) in a signal-transducer-and-activator-of-transcription-5 (STAT5) dependent manner.

Negative regulation of transcription. GFI1B is an essential factor in erythroid and megakaryocytic development and differentiation, very likely with proto-oncogenic potential. GFI1B deficiency leads to embryonic lethality in mice due to failure to produce functional erythrocytes and megakaryocytes and increases the apoptosis rate in leukemic cell lines. The GFI1B gene locus can be autoregulated by autorepression of its own promoter in hematopoietic cells (Vassen et al., 2005; Anguita et al., 2010), most likely by interaction with GATA1 (GATA binding protein 1) (Huang et al., 2005), an activator of GFI1B transcription that is also essential for erythroid and megakaryocytic development. GFI1B and its homolog GFI1 show cross-repression, resulting in an enhanced expression of the respective counterpart, when one of these genes is deleted. The repressory activity of GFI1B is achieved by recruiting histone deacetylases (HDAC1 and HDAC2), lysine specific demethylase 1 (LSD1 or KDM1) and the REST corepressor (CoREST) to target DNA sequences (Saleque et al., 2007). GFI1B alters histone methylation at target gene promoters and is associated with sites of gamma-satellite containing heterochromatin (Vassen et al., 2006). GFI1B interacts also with the histone methyltransferases G9a and SUV39H1 and a role in heterochromatin formation is hypothesized (Vassen et al., 2006). GFI1B target genes (e.g. BCL2L1, SOCS1, SOCS3, CDKN1A, GATA3) are frequently also GATA1 target genes (e.g. GFI1B, GATA2, Myb, Myc) and GFI1B is overrepresented at sites where GATA1 binds to repress its target genes (Yu et al., 2009). GATA2 needs to be repressed by GATA1 in developing erythroid cells pointing to an involvement of a GATA1-GFI1B repressory complex in this process. GATA1 and GFI1B have been found in a complex with SUZ12, a member of the polycomb repressory complex 2 (PRC2, SUZ12 and Eed) on repressed genes in MEL (erythroleukemia) cells (Yu et al., 2009). Since GFI1B is also expressed in hematopoietic stem cells (HSC), the existence of such a repressory complex might point to a role of GFI1B in maintaining HSC self renewal, where PCR complexes play a major role. Consistent with this hypothesis, GFI1B can functionally replace GFI1 during hematopoiesis but not in the development of inner ear hair cells, where GFI1 exerts a critical survival function (Fiolka et al., 2006; Wallis et al., 2003). An implication of GFI1B in sensory epithelial cells similar to GFI1 remains to be elucidated. In megakaryocytes GFI1B is found in a complex with GATA1 and ETO2, another corepressor protein that is also implicated in human leukemogenesis (Hamlett et al., 2008), but how GFI1B regulates megakaryocytic development is not clear yet. GFI1B regulates TGF-beta signaling in bipotent erythroid-megakaryocytic progenitors (Randrianarison-Huetz, 2010), which is involved in the control of their differentiation. Finally, GFI1B regulates the expression of GATA3 in T-cell lymphomas, a critical factor for survival of lymphomas and T-cell progenitors (Wei and Kee, 2007).
Positive regulation of transcription. GFI1B can activate transcription from a promoter containing four GFI1 consensus-sites in the erythroid cell line K562 (Osawa et al., 2002).

GFI1B is highly homologous to its closest relative GFI1. Highly conserved GFI1(B) proteins have been detected in many species from C. elegans to drosophila and human.

A single base mutation in the GFI1B promoter (T-C) was detected affecting a potential Oct-1 binding site in an acute lymphoblastic leukemia patient. The mutation was shown to affect the promoter activity, leading to an increased expression of GFI1B. (Hernández et al., 2010).

A natural variant (p.R231H) was detected in a colorectal cancer sample. A GFI1B promoter mutation was detected in an acute myeloid leukemia M5a patient, affecting a GATA1 binding site which was previously shown to be involved in the regulation of GFI1B expression. (Hernández et al., 2010).

Translocated along with ABL1 in chronic myeloid leukemia with translocation t(9:22).