Institute of Molecular Pathology, Immunology of the University of Porto (IPATIMUP), 4200-465 Porto, Portugal 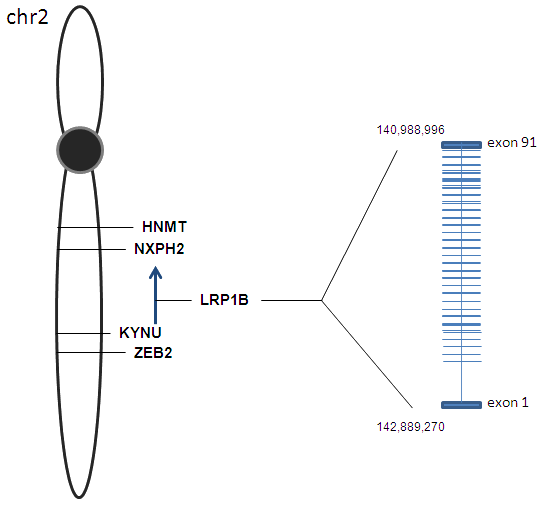 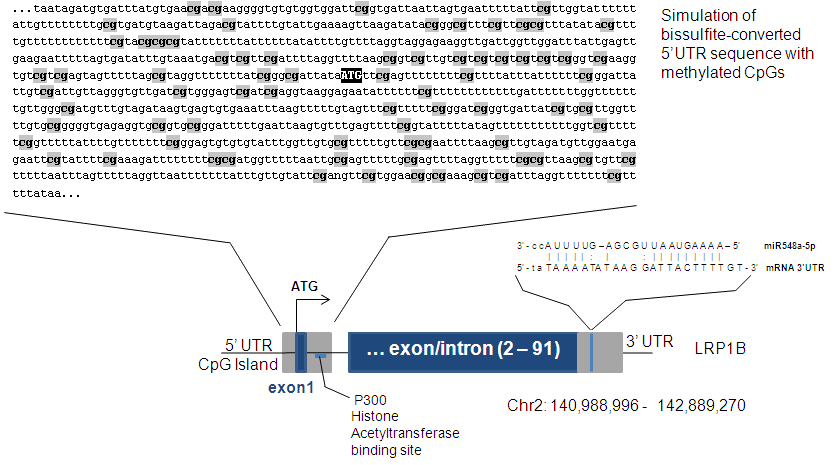 DNA diagram. Overview of sequence-related elements in the LRP1B gene. The gene comprises 91 exons, an upstream CpG-enriched region, an element for the P300 transcription factor (within intron 1) and a downstream 3 UTR sequence which encodes a mRNA binding site for miR-548a-5p.

No LRP1B pseudogene is annotated. 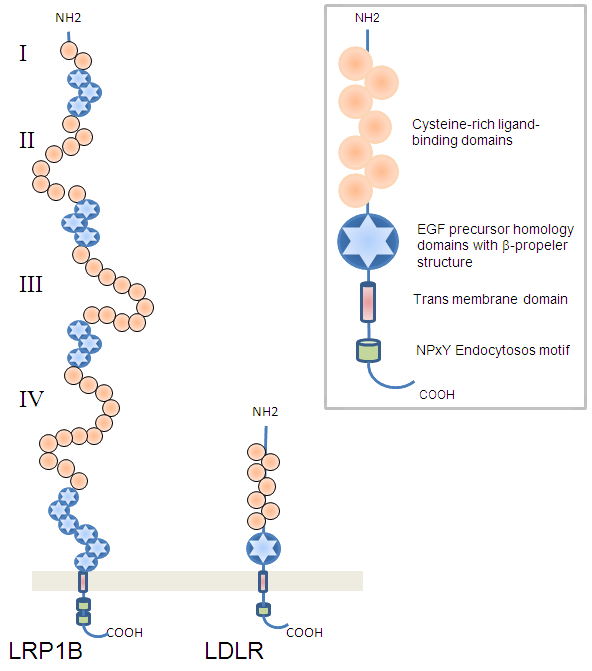 Protein diagram. LRP1B is composed of modular domains, namely extracellular cysteine ligand-binding repeats (CRs) and epidermal growth factor precursor-like domains with β-propeller structure, single pass transmembrane region and cytoplasmatic domains with endocytosis NPXY motifs that are nonetheless homologous to other LDL Receptor Family members, for which the prototypic member is the LDL Receptor. The specificity in LRP1B structure comes from the number and organization of these modules.

Like other members of the LDL receptor family, the modular structures within LRP1B include an extracellular region with interspersed cysteine-rich complement-type repeats (CRs) and EGF repeats with β-propeller structure, a transmembrane domain and a cytoplasmic domain with endocytosis NPXY motifs. In what concerns the specific structure of LRP1B, it has four putative ligand-binding clusters (I, II, III, and IV, from the amino terminus) that consist of 2, 8, 10, and 12 CRs, respectively. These domain clusters are separated from one another by three clusters of EGF precursor repeats and (F/Y) WXD spacer repeats. LRP1B contains a putative furin endopeptidase processing site (REKR) at positions 3954-3957 (Willnow et al., 1999). This post-translational processing event results in the formation of mature LRP as a noncovalently associated heterodimer, consisting of an extracellular 515-kDa subunit and a transmembrane 85-kDa subunit. The transmembrane domain of LRP1B is separated from domain IV and by a cassette of six epidermal growth factor-like precursor repeats. The cytoplasmic tail of LRP1B contains two NPXY motifs. Between these two, there is a unique insertion of 33 amino acid residues contributed by exon 90 (Willnow et al., 1999).

LRP1B expression localizes to the cell membrane as well as to several categories of membrane vesicles involved in intracellular traffic. Proteomic analysis has also detected LRP1B in extracellular vesicles, namely as a component of exosomes (Looze et al., 2009). Soluble LRP1B ectodomains may be released to the extracellular milieu through the action of shedases and exert anchorage independent functions (Dietrich et al., 2010).

The modular protein domains of Lipoprotein Receptors (LRs) account for three important properties. First, individual LRs have been shown to recognize multiple (more then 30) structurally unrelated extracellular ligands, that include lipoprotein complexes but also many other categories of molecules. Second, LRs are capable of engaging endocytosis, resulting in clearance of their ligands from the extracellular milieu. Third, LRs can associate with other membrane bound receptors, such as integrins and receptor tyrosine kinases, and with intracellular signaling molecules. The classical roles of LRPs are to act as scavenger receptors in the clearance of a myriad of extracellular ligands from the pericellular environment (Herz and Strickland, 2001; May et al., 2007). The best studied ligands of LRs include lipoprotein complexes and proteinase/proteinase inhibitor complexes, such as α2 macroglobulin and members of the urokinase Plasminogen Activating (uPA) system (uPA, uPAR and PAI-1) (Herz et al., 1992; Nykjaer et al., 1992).

LRP1B functions at the extracellular and cell membrane levels:
In order to characterize LRP1B ligands, immobilized recombinant extracellular sub-domains of LRP1B have been used as decoys to perform affinity chromatography using brain lysates (Liu et al., 2001) or in serum (Haas et al., 2011) as a source of potential physiological ligands. Using this strategy, LRP1B has been previously found to bind lipoproteins and ligands of the uPA system (Liu et al., 2001; Li et al., 2002; Knisely et al., 2007). Also several serum proteins, including fibrinogen and apoE-carrying lipoproteins showed affinity to LRP1B extracellular regions (Haas et al., 2011). It should nevertheless be noted that these approaches inherently under-estimate the full impact of LRP1B activity since, in the former study (Liu et al., 2001), the proteome which has been interrogated was derived from brain-lysate fractions, rather than the extracellular proteome which shares the physiological milieu with LRP1B. In the latter study (Haas et al., 2011), the use of serum restricts candidate ligands to systemic circulating factors and neglects local factors that may play a role in the tissue microenvironment. Evidence that LRP1B activity may, directly or indirectly, modulate the abundance of multiple extracellular factors comes from the analysis of conditioned media from LRP1B overexpressing cells, relative to their parental counterparts. Conditioned media from cells overexpressing LRP1B shows a reduction in the amounts of MMP2 as well as other metalloproteinases, growth factors, cytokines and angiogenic factors, indicating that LRP1B impacts the overall extracellular proteome (Prazeres et al., 2011). It is thus expected that LRP1B, in analogy with other LRs, can displays a myriad of additional extracellular ligands that impact the physiology in the extracellular microenvironment.
LRP1B ligands also include the cellular prion protein (Taylor and Hooper, 2007; Lu et al., 2010).
At the membrane level, LRP1B has been shown to modulate the localization of Urokinase and PDGF receptors (Tanaga et al., 2004) and to retain beta-amyloid precursor protein at the cell surface and reducing amyloid-beta peptide production (Cam et al., 2004).

Intracellular LRP1B partners:
Six interacting partners of the LRP1B cytoplasmic region have been identified by yeast two-hybrid screen and immunoprecipitation. One of the partners, PICK1 recognizes the C-terminus of LRP1B and inhibits phosphorylation of LRP1B by PKC alpha (Shiroshima et al., 2009). The output of these interactions in terms of signaling pathways activated in consequence of LRP1B activity remains unexplored.

Proteolytic release of LRP1B domains:
LRP1B ectodomains resulting from proteolytic shedding of the extracellular region can be found in the soluble form (Dietrich et al., 2010).
LRP1B has also been shown to undergo regulated intra-membrane proteolysis in a gamma-secretase-dependent manner, releasing an intracellular domain (ICD) that then translocates to the nucleus (Liu et al., 2007). The functions of the ICD in the nucleus are unknown.

Functions associated with heterologous ligands:
LRP1B may also act as a receptor for heterologous biomolecules such as the Pseudomonas exotoxin (Pastrana et al., 2005) and, most interestingly, for certain drugs, putting emphasis on the role of endocytosis in cellular drug uptake (Chung and Wasan, 2004). In accordance with this, reduced uptake of liposomes by LRP1B may underlie the mechanism of acquired resistance to liposomal doxorubicin chemotherapy in high-grade serous ovarian cancers that display LRP1B deletion (Cowin et al., 2012).

LRP1B is a member of the LDL receptor family which is composed of seven receptors structurally homologous to the LDL receptor, the prototypic gene of familial hypercholesterolemia (Hobbs et al., 1992). These receptors, commonly known as lipoprotein receptors (LRs), include the LDL receptor, very low density lipoprotein (VLDL) receptor, apoE receptor 2, multiple epidermal growth factor-like domains 7 (MEGF7), glycoprotein 330 (gp330/megalin/LRP2), LRP1 and LRP1B. In addition, the family includes members that are more distantly related, such as LRP5, LRP6 and SorLa/LRP11. The close similarity in protein domain structure between LRPs strongly suggests that Lipoprotein Receptors may share a comparable spectrum of ligands. Nevertheless, this deduction may not be straightforward. For instance, LRP1B ligands of the uPA system were found to overlap those of LRP1, its closest related member (Liu et al., 2001). However, distinct properties are displayed by LRP1B since, in contrast to LRP1, cells expressing LRP1B display a substantially slower rate of uPA/PAI-1 complex internalization (Knisely et al., 2007), which impairs the regeneration of free uPAR on the cell surface and correlates with a diminished rate of cell migration (Liu et al., 2001; Li et al., 2002). This emphasizes that the functions of LRs may be overlapping and yet distinct as a result of their ligand spectrum and kinetics of endocytosis (Liu et al., 2001).

No germline LRP1B mutations have been characterized.