After metabolic reprogramming, many cancer cells become glutamine addicted, that is, they depend on a high consumption of this amino acid for their survival and proliferation. Glutaminase catalyzes the stoichiometric conversion of L-glutamine to L-glutamate and ammonium ions, the first step of glutaminolysis. GLS gene encodes two isoforms, known as kidney-type glutaminase (KGA) and glutaminase C (GAC). Upregulation of GLS is a common feature of many tumors and, in recent years, this enzyme and its interacting partners have attracted much attention as potential new targets for cancer therapy. Considerable effort is being devoted towards the development of small-molecule inhibitors of GLS. 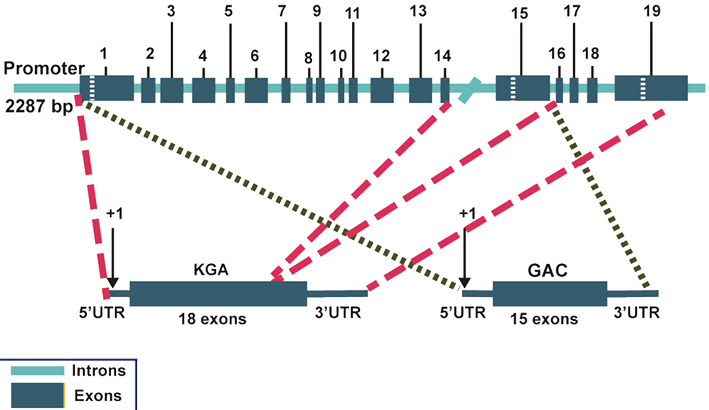 The rat KGA isoform has been found in all nonhepatic tissues with glutaminase activity, including fetal liver (Smith and Watford, 1990; Curthoys and Watford, 1995). In human tissues, the KGA isoform is expressed in kidney, brain, heart, lung and pancreas, but not in skeletal muscle or liver (Aledo et al., 2000). The human GAC isoform, first described in a cancer cell line, is found principally in cardiac muscle and pancreas, at lower levels in lung, kidney and placenta, and is not detected in brain or liver. (Elgadi et al., 1999). GLS proteins are also overexpressed in a wide variety of tumors compared to normal tissues, with GAC being the predominant isoform in many of them, such as breast carcinoma (Elgadi et al., 1999), prostate cancer (Gao et al., 2009), non-small cell lung cancer (van den Heuvel et al., 2012), leukemia (Pérez-Gómez et al., 2005; Matre et al., 2016), glioma (Szeliga et al., 2008; Tanaka et al., 2015), among others.

Errera and Greenstein (1949) proposed for the first time a mitochondrial location for glutaminase in liver, and subsequently different authors demonstrated experimentally this location in both liver and other organs such as kidney, brain and intestine (Klingman and Handler, 1958; Guha, 1961; Katunuma et al., 1967; Pinkus and Windmueller, 1977). However, some authors have described a non-mitochondrial cytoplasmic pool of glutaminase (Aoki et al., 1991). In a recent study with several tumor cell lines, Cassago et al. (2012) have reported a cytosolic localization for KGA, with only GAC located in mitochondria. These findings suggest that the intracellular localization of GLS may depend on other factors other than the mitochondrial targeting sequence at its N-terminus. The sub-mitochondrial location of glutaminase has been studied extensively, but it is still a controversial issue. Although glutaminase seems to be associated with the inner mitochondrial membrane (IMM), different orientations of the enzyme have been proposed: to both sides of the IMM (Kvamme and Olsen, 1979), the intermembrane space (c-side) (Kvamme et al., 1991; Roberg et al., 1995), or the matrix space (m-side) (Shapiro et al., 1985; Aledo et al., 1997).

GLS (E.C. 3.5.1.2.) catalyzes the hydrolytic deamidation of L-glutamine to form L-glutamate and ammonium, the first step of glutaminolysis. This enzyme fulfills essential tasks related to tissue-specific function. In kidney, glutaminase reaction is the initial step in renal ammoniagenesis. As mentioned above, GLS is induced through its mRNA stabilization in response to metabolic acidosis. This results in an increased consumption of glutamine extracted from plasma in the proximal convolute tubules and the excretion of the generated ammonium ions in the urine. The further metabolization of α-ketoglutarate (α-KG) yields bicarbonate ions that are transported into blood to restore the acid-base balance (Curthoys, 2001). In brain, GLS participates in the synthesis and recycling of glutamate, the principal excitatory neurotransmitter, through the astrocytic-neuronal glutamate-glutamine cycle (Nicklas et al., 1987; Daikhin and Yudkoff, 2000). Knockout mice for the Gls gene die shortly after birth due to impaired glutamatergic synaptic function, stressing the importance of this enzyme in glutamatergic transmission (Masson et al., 2006). Moreover, it has been shown that small interfering RNA (siRNA) silencing of GLS in neural progenitor cells impaired their differentiation, proliferation and survival, suggesting a critical role of GLS in neurogenesis (Wang et al., 2014).
Besides its role in normal tissues, glutaminase is highly expressed in tumors, where its activity has been correlated with malignancy (Knox et al., 1967; Linder-Horowitz et al., 1969; Kovacevik and McGivan, 1983). Many cancer cells develop what has been called "glutamine addiction", a term now widely used to reflect the strong dependence for this essential nitrogen substrate after metabolic reprogramming (Wise et al., 2008). Silencing GLS expression by genetic knockdown or inhibiting its activity with drug inhibitors reveal the critical role of GLS in this addiction. Thus, the specific inhibition of GLS by antisense mRNA slowed tumor cell growth and induced phenotypic changes that made these cells vulnerable to the hosts immune system (Lobo et al., 2000; Segura et al., 2001). In addition, GLS enables cancer cells to counteract ROS. Glutamate is the precursor of glutathione (GSH) and a source or reducing equivalents (Hensley et al., 2013). Based on the abundant published data on recent years on the role of glutaminase in cancer, this enzyme has become a potential drug target for therapeutic intervention (Matés et al., 2018).