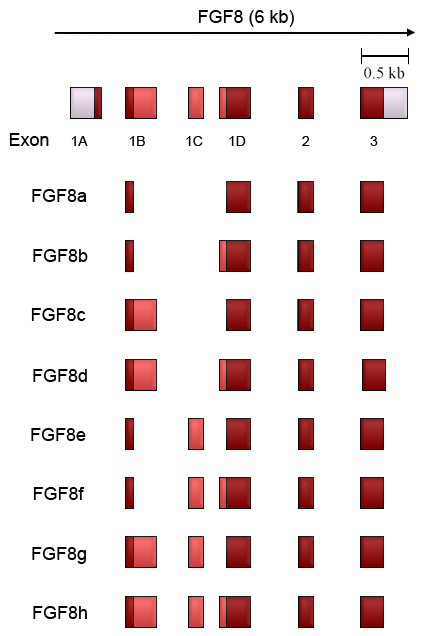 Alternative splicing of FGF8 gene gives rise to eight potential protein isoforms in the mouse (FGF8a-h) and four in the human (a, b, e, f) (Gemel et al., 1996, see Figure 1).

Fibroblast growth factor 8 is a secreted protein mitogen which belongs to fibroblast growth factor family. It exerts its action by binding cell surface tyrosine kinase recetors FGFR1-4 (Powers et al., 2000; Sleeman et al., 2001). It is implicated in embryonic development, tumor growth and angiogenesis. FGF8 was originally found as an androgen-induced growth factor (AIGF) from the conditioned medium of the androgen-dependent mouse mammary carcinoma cell line SC-3 (Tanaka et al., 1992). Whether its expression is directly androgen regulated is not clear (Gnanapragasam et al., 2002; Erdeich-Epstein et al., 2005). However, it has been shown to be co-expressed with androgen receptor in breast and prostate cancer. FGF8 is also called Kal-6 since it belongs to genes which have been shown to be mutated in a subset of patients with Kallmans syndrome (combination of hypogonadotropic hypogonadism and anosmia). In addition, FGF8 belongs to growth factors that could be isolated by affinity chromatography on Heparin-Sepharose columns and are thus called heparin-binding growth factors (HBGF). The interaction of heparin with FGF stabilizes FGF to denaturation (Gospodarowicz and Cheng, 1986) and proteolysis and is required for FGF mediated FGFR activation (Ornitz, 2000).

FGF receptors, to which FGF8 binds, are transmembrane proteins containing three extracellular immunoglobulin-like domains (IgI, IgII, IgIII), an acidic region between IgI and IgII, a transmembrane domain, and an intracellular tyrosine kinase domain. The involvement of receptor tyrosine phosphorylation in FGF signalling was first suggested by early binding studies (Moscatelli et al., 1987). An important mechanism by which FGF receptors determine specificity for different FGFs is by alternate exon usage of the IgIII forms. The exons coding for the three possible IgIII domains (IgIIIa, IgIIIb, IgIIIc) are situated contiguously and in the same order in FGFR1, FGFR2 and FGFR3 (Johnson et al., 1991; Chellaiah et al., 1994). The FGFR4 gene is unique in that there is only one possible form of its IgIII domain (Vainikka et al., 1992). IgIIIa splice variant codes for a secreted truncated protein which is not capable of transducing signals but instead may act to sequester released FGFs and potentially inhibit FGF signaling. FGF8 predominantly activates c-spliceforms of the receptors which are expressed mainly by the cells of mesenchymal origin. Thus, epithelially secreted FGF8 signals to neighbouring mesenchyme and may have a role in the epithelial-mesenchymal transition important in carcinogenesis. However, FGF8 is also well known as an autocrine growth factor in the stimulation of cancer cell proliferation, anchorage independent growth and migration (Figure 2). Full FGF receptor activation requires a coreceptor, a cell surface heparan sulfate proteoglycan (HSPG), which traps the growth factor on the cell surface and stabilizes the FGF/FGFR complex (Ornitz, 2000). Tissue-specific heparan fragments and tissue specific sulfation patterns of heparans may regulate FGFs by controlling their diffusion in the extracellular matrix and their ability to activate specific receptors (Chang et al., 2000). Strong binding of FGFs to heparin and heparan sulfated proteoglycans leads to deposition and sequestration of secreted or exocytosed FGFs in the extracellular matrix. Storage of FGFs in the extracellular matrix may serve as an angiogenesis regulatory reservoir released in response to degradation of the matrix (Folkman et al., 1988).
FGF activation of FGFRs results in activation of signalling cascades such as phospholipase C gamma, phosphatidiylinositol-3 kinase and MAPK pathways that lead to expression of target genes and increased cell proliferation, survival and migration. Negative modulators of FGF signalling that have been found to be co-expressed with FGF8 include sprouty proteins (Spry1, Spry2), MAP-kinase phosphatase 3 (Mkp3) and Sef (Similar expression to FGFs) genes. Recently, FGF8 has been shown to downregulate the expression of thrombospondin-1 (TSP-1) (Mattila et al., 2006) through two independent pathways, MEK1/MEK2 and PI3K (Tarkkonen et al., 2010). Repression of TSP-1 may be an important mechanism involved in the induction of an angiogenic phenotype and growth of FGF8-expressing cancer. 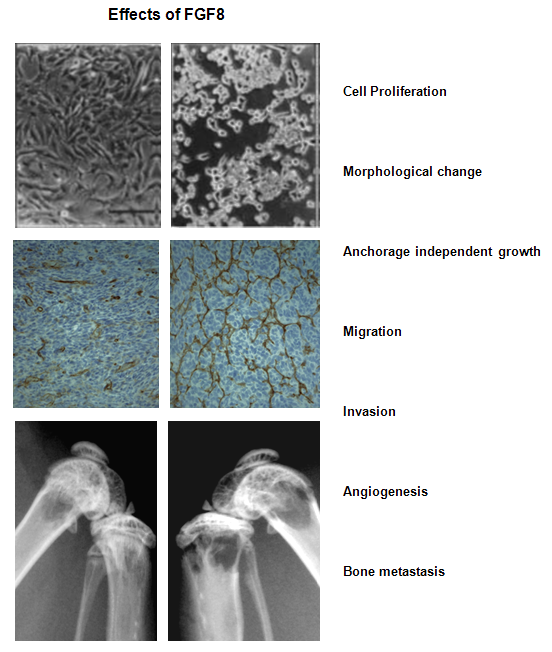