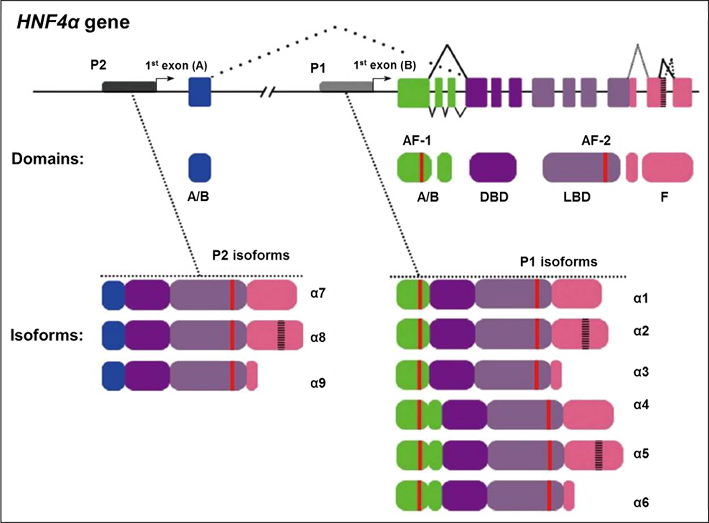 Figure 1 HNF4A transcripts. HNF4A contains two distinct promoters (P1 and P2) that drive expression of 9 known isoforms (α1 to α9) of the gene. Transcription through the P1 promoter allows transcription starting from exon 1 (B) coding for the N-terminal domain of HNF4A, designated as AF-1. Transcription through the P2 promoter allows the inclusion of exon 1 (A) but the exclusion of the exon 1 (B). Although alternative splicing of exon 1 (B) modifies only A/B domain of the P1 isoforms, F domains of both isoforms are modified by alternative splicing of the last exons. DBD: DNA binding domain; LBD: Ligand binding domain; AF-1: Activating function-1; AF-2: Activating function-2 (Modified from Babeu and Boudreau, 2014).

The HNF4A gene is composed of thirteen exons and contains two promoters, P1 and P2, which can drive the expression of many splice variants (HNF4A1-HNF4A9) that differ in the variable A/B and F domains (Harries et al., 2008). The variants derived from the P1 and P2 promoters are referred to as HNF4A1-HNF4A6 and HNF4A7-HNF4A9, respectively (Erdmann et al., 2007).
The different promoters are used in different tissues and at different times during development, and the encoded protein controls the expression of several genes. Multiple isoforms are proposed to exist in mammals and are thought to have different physiological roles in development and differentiation (Walesky and Apte, 2015).

Domain structure and DNA binding
HNF4A consists of six structural domains named A-F that are responsible for specific functions: an N-terminal activation domain (AF-1, also referred to as A/B domain); a zinc finger domain that serves as the DNA-binding domain (DBD; C domain) which is highly conserved among NRs; a putative ligand binding domain (LBD; E domain); and a C-terminal domain which functions in homodimerization and activation (AF-2), and a repressor region (F domain) that inhibits access of coactivators to AF-2, and possibly to other regions (Walesky and Apte, 2015). The DBD consists of two zinc fingers, and 12 alpha helices that create a hydrophobic pocket for ligand binding (Duda et al., 2004) (Figure 2).
HNF4A binds DNA regulatory elements as a homodimer. E domain (Ligand Binding Domain-LBD) appears to be critical for homodimerization and to play a role in preventing heterodimerization with other NRs such as RXR or RAR (Bogan et al., 2000). HNF4A binds DNA response elements consisting of direct repeats. It can also bind several different co-activators (such as GRIP1, NCOA1, NCOA2, NCOA3, (SRC1, 2 and 3), CREBBP (CBP/P300), PPARGC1A (PGC1)) (MartÍnez-Jiménez et al., 2006).

Multiple HNF4A isoforms exist in humans and are suggested to have different physiological roles in development and transcriptional regulation of target genes (Figure 1). HNF4A1 and 2 isoforms from the P1 promoter are expressed in the liver (hepatocytes), kidneys, small intestine and colon. HNF4A3 and 4 are expressed in human liver. P2 promoter-driven HNF4A7 and 8 are expressed in the fetal liver and adult pancreas (β-cells) and to a lesser extent in the adult liver (bile ducts), small intestine, colon and stomach. HNF4A isoforms from both the P1 and P2 promoter were also reported to be expressed in the epididymis (Tanaka et al., 2006). However, not much is known about the developmental and physiological relevance of the HNF4A isoforms (Boyd et al., 2009). In addition to several different isoforms produced from the HNF4A gene by different promoter usage and alternative splicing, the 3UTR of the gene was also reported to control HNF4A expression (Wirsing et al., 2011).

Localized primarily in the nucleus. 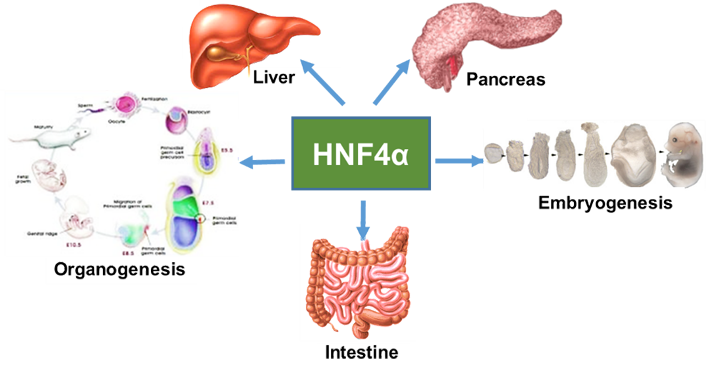 HNF4A is highly conserved across species, with 100% amino acid conservation in the DNA binding domain of all mammalian HNF4A. HNF4A has been found in every animal organism examined thus far, including sponge and coral, and has been postulated to be the ancestor of the entire NR family (Bolotin et al., 2011) (Table 1 and Figure 4). 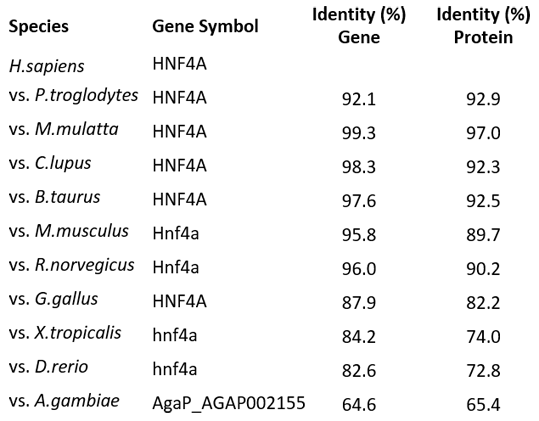 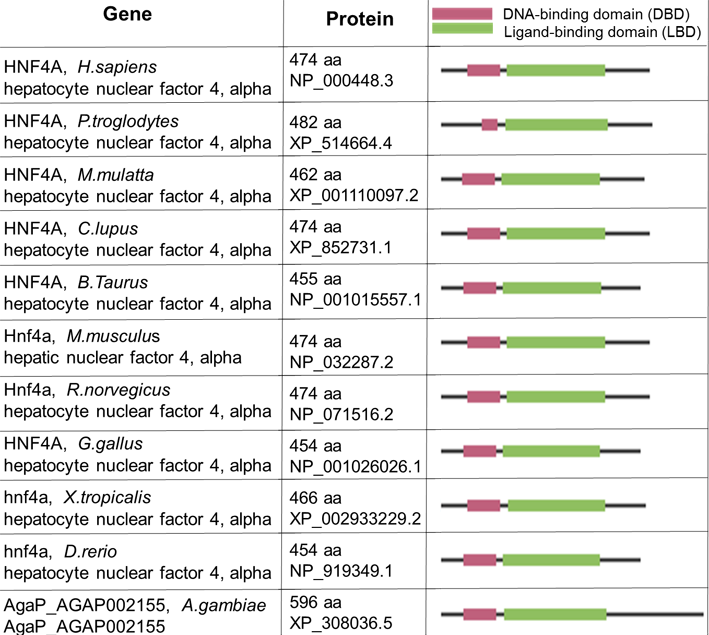 HNF4A is at the center of a complex transcriptional regulatory network and is implicated to several human diseases including diabetes (Mohlke and Boehnke, 2005), MODY1 (Ryffel, 2001), hemophilia (Reijnen et al., 1992) and hepatitis B viral infections (He et al., 2012). The HNF4A locus has been associated with high-density lipoprotein cholesterol (HDL-C) (Teslovich et al., 2010) and metabolic dyslipidemia (Suviolahti et al., 2006). Finally, since it regulates several Phase I/II and other genes in the liver, HNF4A is suggested to play a role in drug metabolism (Hwang-Verslues and Sladek, 2010). In addition, polymorphisms (Hwang-Verslues and Sladek, 2010; Ruchat et al., 2009; Marcil et al., 2015) and mutations (Ryffel, 2001) in the human HNF4A gene are associated with altered expression and transcriptional activity.