Both human and mouse LPA2 genes are present as a single copy and are divided among three exons with start and stop sites in the second and third exons, respectively (Contos and Chun, 2000). Introns are located upstream of the start codon and separate the coding region from the transmembrane domain VI. As seen by Northern blot analysis, there are two transcripts sizes for both human and mouse LPA2. In human, the transcript sizes are ~1.8kb and ~10kb and in mouse the transcript sizes are ~3kb and ~7kb (An et al., 1998). 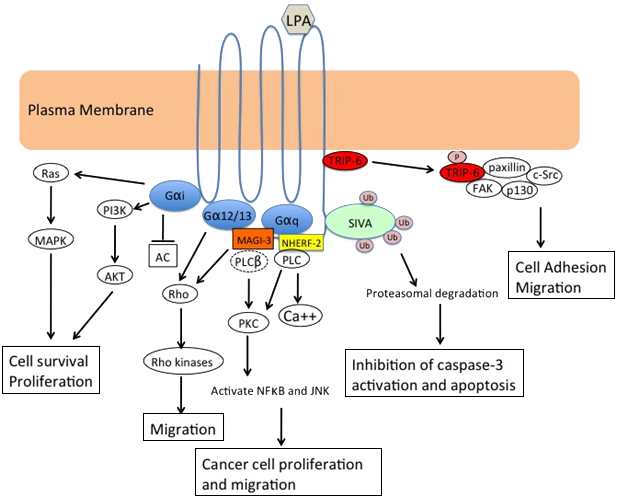 LPA2 is a G protein-coupled receptor (GPCR) that spans the plasma membrane seven times, hence having three extracellular and three intracellular loops. The C-terminus of LPA contains a di-leucine motif and several putative palmitoylated cysteine residues that associate with LIM-domain containing TRIP6 (Thyroid Hormone Receptor-Interacting Protein 6) and Siva-1 protein. LPA-dependent recruitment of TRIP6 to the plasma membrane promotes its phosphorylation and targeting to focal adhesions, and leads to cell adhesion and migration. SIVA-1 gets ubiquitinated in an LPA-dependent manner, leading to its degradation and subsequent decrease in its pro-apoptotic abilities. The last four amino acids at the C-terminus (DSTL) contain a PDZ-binding motif and interact with NHERF2 and MAGI-3. NHERF2 clusters LPA2 and PLC-β, which then signals downstream IP3-dependent Ca++ mobilization and DAG-dependent PKC activation. MAGI-3 has been shown to interact with LPA2 and regulate the activation of Erk and RhoA, leading to cell migration. MAGI-3 has also been shown to reciprocally regulate PLC-β and inhibit NHERF2-promoted tumor cell migration and invasion (Lee et al., 2011). LPA2 also couples to Gαi, Gα12/13, and Gαq, activating downstream signaling pathways that lead to cell survival, proliferation, and motility.

LPA2 is a G-protein coupled receptor (GPCR) that belongs to the endothelial differentiation gene (Edg) family of receptors. It was first identified in 1998 following a search in the GenBank for homologs to human EDG2 (LPA1) (An et al., 1998; Contos and Chun, 1998).

LPA2 is a GPCR that spans the plasma membrane seven times and contains three extracellular loops and three intracellular loops. LPA2 is unique from the other LPA receptors as it contains two distinct protein-protein interaction domains in the carboxyl-terminal tail (aa 296-351). In the proximal region, LPA2 contains a di-leucine motif and several putative palmitoylated cysteine residues. This region is responsible for associating with zinc-finger proteins, including TRIP6 (Xu et al., 2004) and the proapoptotic Siva-1 protein (Lin et al., 2007). In the distal region, there are several serine and threonine residues that can be phosphorylated by G protein-coupled receptor kinases (GRKs) and may be involved in β-arrestin binding and receptor internalization. The last four amino acids of this region (DSTL) contains a class I PDZ-binding motif and mediates interactions with a number of proteins such as Na+/H+ exchanger regulatory factor 2 (NHERF2) (Oh et al., 2004; Yun et al., 2005), PDZ-RhoGEF and LARG (Yamada et al., 2005), and MAGI-3 (Zhang et al., 2007).

The first human LPA2 cDNA clone was derived from an ovarian tumor library, however it differed from reported human LPA2 sequences (An et al., 1998). The protein product from the ovarian tumor lacks the last four amino acids (DSTL) and is 31 amino acid residues longer at the C-terminus relative to the predicted protein product. The extra amino acids are the result of a guanine nucleotide deletion in the fourth to last codon (Contos and Chun, 2000). Additionally, in two human colon cancer cell lines, DLD1 and SW48, LPA2 and LPA4 were found to contain five mutations of G/C to A/T transitions (Tsujino et al., 2010). These mutated LPA2 receptors may alter LPA2 signaling through its respective G proteins and downstream pathways, and play a role in cancer progression.