MUC4 gene is located on the chromosome 3 in the region q29, oriented from telomere to centromere and clustered with another mucin gene MUC20. MUC4 is highly polymorphic, harboring numerous sequences repeated in tandem and presenting variable number of tandem repeat (VNTR) polymorphism. The sequence repeated in tandem is localized in exon 2 and is composed of a 48 bp repetitive unit. Due to this highly variable region 27 distinct alleles have been identified for MUC4. Among these, three alleles represent 78.6% of all alleles detected: the 19 kb, 10.5 kb, and 15 kb that present a prevalence of 47%, 18%, and 13.6 % respectively. In addition, 24 alternatively splice transcripts have been identified for MUC4 gene, coding for membrane-anchored and secreted forms. 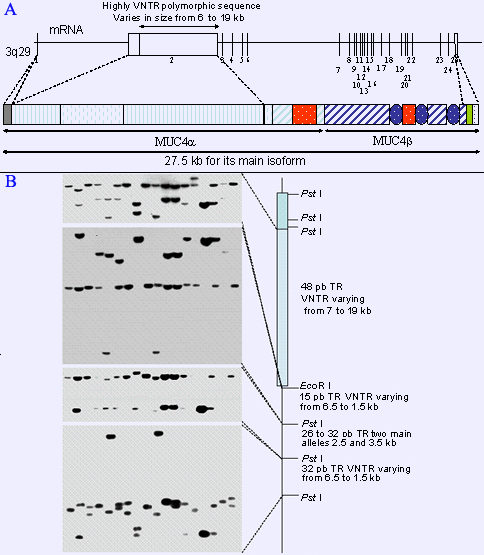 A: Schematic representation of MUC4 gene and mRNA. The representation is not drawn to scale.
B: Example of VTNR polymorphism associated with MUC4 gene. The gDNA of 18 healthy individuals was extracted from the PBMCs and digested by ECORI and PstI endonucleases. Southern blot was hybridized with [32] P-radiolabeled probes of each sequence repeated in tandem.

MUC4 gene spans on a 70 kb-long DNA fragment located in 3q29 at the position 196959310-197023545. This position varies from individual to individual due to VNTR polymorphism of several sequences repeated in tandem. The largest domain repeated in tandem is localized in exon 2 and is composed of a motif of 48 bp, repeated up to 400 times. This domain varies from 7 to 19 kb. Three other sequences repeated in tandem with a motif of 15 bp, 26 to 32 bp and 32 bp are positioned in introns 3, 4, and 5 respectively. Theses sequences present also VNTR polymorphism.
Various SNPs are reported for MUC4 coding sequence; however, either VNTR or SNP polymorphism have been associated with specific physiological condition or disease.

MUC4 is transcribed in at least 24 distinct splice variant forms in normal and malignant human tissues. Twenty-two of these variants are generated by alternative splicing of the exons at the 3-extremity and are referred sv1- to sv21-MUC4. Two splice forms are generated by alternative splicing of exon 2 and are called MUC4/X and MUC4/Y. So far, it is unknown if these splice forms are translated, however their deduced amino acid composition leads to secreted and membrane-anchored proteins. The main isoform of MUC4 (up to 27.5 kb in size), referred to as sv0-MUC4, encodes for full-length MUC4 protein.
MUC4 5-flanking region (over 3.7 kb upstream of the first ATG) has been characterized. Two transcriptionally active units drive MUC4 expression. The proximal promoter is TATA-less, possesses a transcription initiation site at -199, and is mainly composed of GC-rich domains that are potential binding sites for Sp1 and the CACCC box binding protein. Furthermore, a very high density of binding sites for factors known to initiate transcription in TATA-less promoters (Sp1, CACCC box, GRE, AP-1, PEA3 and Med-1) was found within that promoter. The distal promoter is flanked by a TATA box located at -2672/-2668 and three transcriptional initiation sites at -2603, -2604 and -2605. Responsive regions and cis-elements for transcription factors involved in Protein Kinase A, Protein Kinase C, cAMP signaling pathways, in inflammation (NF-kB) and in intestinal (HNF-1, HNF-3, HNF4A, GATA4, GATA-6, CDX1, CDX2) and respiratory ( TITF1, GATA-6, HNF-3b) epithelial cell differentiation have also been identified. Altogether, these results suggest that MUC4 transcription is complex, tightly regulated and involves many signaling pathways.

MUC4 is a high molecular weight O-glycoprotein. Molecular weight for precursor full-length MUC4 protein may range between 550-930 kDa depending upon the VNTR polymorphism. Classically, the protein moiety represents 20% of the mucin mature molecular weight, leading to a fully glycosylated protein of 4,650 kDa. 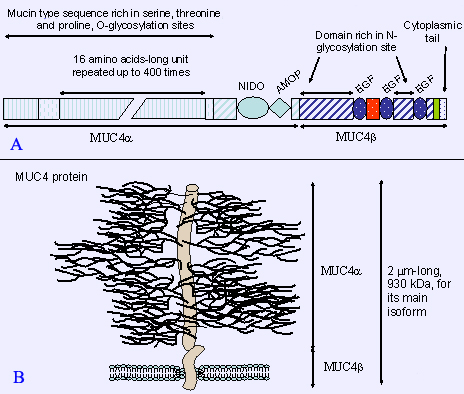 MUC4 is synthesized as a precursor cleaved in two subunits that remain non-covalently link to each other: the mucin type subunit MUC4a of 850 kDa and the membrane-bound growth factor like subunit MUC4b of 80 kDa. MUC4 is a modular protein, composed of very distinct domains.
MUC4a is rich in serine, threonine, and proline residues and present a central domain composed of 16 amino acids repeated in tandem up to 400 times. This repetitive domain is the hallmark of the mucin family. The carboxy-extremity of MUC4a harbors a NIDO and an AMOP domain. The NIDO domain is a domain identified in the nidogen protein and present in several proteins such as the tumor endothelial marker TEM7. TEM7 plays a role in angiogenesis via its NIDO domain. The AMOP domain (adhesion-associated domain in MUC4 and other proteins) is suggested to have a role in cell adhesion. In addition to the AMOP and NIDO domains, analysis of the MUC4a sequence reveals a high degree of similarity with a von Willebrand factor (vWF) D domain. However, none of the cysteine residues that characterized a vWF D domain are conserved in the MUC4 sequence.
The MUC4b subunit contains two domains rich in N-glycosylation sites, 3 EGF-like domains, a transmembrane sequence, and a small 22 amino acids long cytoplasmic tail.

MUC4 expression is developmentally regulated. In normal physiologic conditions, MUC4 is expressed in the epithelium of the respiratory, digestive and urogenital tracts, with level that varies from tissue to tissues. In the respiratory tract, MUC4 is strongly expressed in the trachea and the lung. In the digestive tract, its main pattern of expression is the oesophagus and the colon. However, MUC4 is not expressed by the annex of the digestive tract such as the liver, the pancreas, and the gallbladder. MUC4 is also expressed by the epithelial cells of the ocular and auditory systems.
MUC4 is overexpressed or aberrantly expressed in several diseases, such as inflammatory bowel diseases (Crohn or ulcerative colitis) and malignancy. For instance, MUC4 is overexpressed in lung, oesophagus, and colon cancer and is aberrantly expressed in pancreatic cancer. Neoexpression of MUC4 is observed early in precancerous pancreatic intraepithelial neoplastic lesions that further correlates with the disease progression stages.
Many studies has been conducted on human pancreatic or other cancer cell lines in order to elucidate molecular mechanisms responsible for aberrant expression of MUC4 in diseased condition. Initial studies about MUC4 transcriptional regulation showed that Sp1 and Sp3 were important regulators of MUC4 basal expression. EGF and TGF-b growth factors and PKC signaling pathway stimulation results in up regulation of the promoter activity. Whereas TNF-a and IFN-g inflammatory cytokines alone had no effect on MUC4 transcriptional activity, a strong synergistic effect between IFN-g and TNF-a or IFN-g and TGF-b was observed. Activation by IFN-g was then showed to be mediated by STAT-1. More recently, Th1 (IL-2) and Th2 (IL-12, IL-10) cytokines were shown to interfere with pancreatic tumorigenic environment and possibly modulate MUC4 expression. Subsequent studies aimed at deciphering MUC4 regulation by TGF-b pathway showed that it could be either Smad4-dependent, Smad4-independent (MAPK, PKA, PKC). Retinoic acid induced MUC4 expression was mediated by TGF-b2 and involved RAR-a. TGF-b2 expression in vivo also correlated with that of MUC4 in pancreatic tumors. Interestingly, recent data have shown that MUC4 is negatively regulated by cystic fibrosis transmembrane regulator (CFTR), a chloride channel that is defective in CF.
In oesophageal cancer cells, MUC4 is regulated by bile acids via activation of phosphatidylinositol 3-kinase pathway or activation of HNF-1a.
Studies in lung adenocarcinoma cell lines focused on cytokines involved in airway inflammation showed that MUC4 is regulated by IL-4 via JAK-3 and IL-9.
Identification of the molecular mechanisms governing MUC4 expression will be very informative to assign direct roles to that mucin in carcinogenesis and on the biological properties of the tumor cell and should provide new tools in the future for therapeutic intervention.

In normal physiologic situation, MUC4 is localized in the membrane at the apical region of the cells and in the mucus secretion. During cancer development, MUC4 exhibits diffuse expression in both the membrane and cytoplasm. Furthermore, due to loss of cell polarity, defined apical localization of MUC4 is disrupted.

MUC4 transmembrane mucin is a highly glycosylated protein with an extended rigid extracellular domain that may confer a role for MUC4 as a molecular sensor between the extracellular milieu and the epithelial cell. MUC4 is also the putative ligand of ERBB2 oncogenic receptor and thus may participate in cell signalling, influence cell proliferation, tumor progression, tumor cell morphology, cell polarity and escape to immune surveillance. Moreover, its over-expression in numerous cancers (lung, oesophagus, intestine, pancreas, etc.) is often associated with a poor prognosis. Functional role of MUC4 in pancreatic tumor growth and metastasis has also been recently demonstrated.
MUC4 consists of two subunits, the extracellular highly glycosylated mucin subunit (MUC4-a) and a transmembrane subunit containing three EGF-like domains (MUC4-b). These subunits of MUC4 may confer diverse functions to MUC4. The large sized extracellular subunit may provide the anti-adhesive or adhesive functions. The anti-adhesive function of MUC4 may aid in loosening the tumor cell-ECM interactions and facilitating the dissemination of tumor cells. Whereas, the high degree of glycosylation present in tandem repeat domain of MUC4 mucin can help in the adhesion of tumor cells to secondary sites and hence promote metastasis.
Another important function provided by MUC4 mucin is modulation of HER-2/ERBB2 mediated signaling. MUC4, an interaction partner of the proto-oncogene HER2, induces its localization at the cell membrane and triggers the signaling pathways downstream to HER-2 activation. The consequences of such interactions and signaling activation lead to malignant transformation. Hence, dysregulation of MUC4 expression, a protective cell surface protein, may have deleterious effects. The association of MUC4 with ERBB2 involves its translocation from the basolateral toward the apical membrane and increasing the membrane stability. Regulation of MUC4 and ERBB2 by PEA3 transcription factor was found to be conversely correlated, stressing the fact that balance between MUC4 and ErbB2 will orientate the tumor cell toward either differentiation or proliferation.
Under normal physiological conditions, MUC4 provides protection, lubrication and moisturization to the epithelial surfaces by trapping the foreign particles and preventing their accessibility to the cells. Being expressed in fetus tissue before differentiation, MUC4 is also suggested to play role in morphogenic functions.

Several orthologues of MUC4 are totally or partially characterized. Mouse (mMuc4) and rat (rMuc4 or SMC for sialomucin complex) are fully identified and present 60 to 70% homology with human MUC4. Mouse mMuc4 is localized on the chromosome 16. Partial cDNA sequences of porcine, chinchilla, monkey, and dog Muc4 were also recently identified.

Entity name
Pancreatic adenocarcinoma.
Disease
Worldwide, pancreatic cancer is the eleventh most common cancer and the fourth leading cause of cancer related death among men and women. Pancreatic cancer presents a 5-years survival rate of 5%. The incidence and age-adjusted mortality rate are almost equal, underscoring the aggressive nature of the disease.
Prognosis
The DU-PAN-2 antibody that recognizes a tumor-associated antigen carries by the MUC4 protein is in clinical used in Japan for diagnostic of pancreatic adenocarcinoma. MUC4 is aberrantly expressed by 80% of the adenocarnicoma of the pancreatic gland while not expressed in the normal pancreas or in pancreatitis. In addition, MUC4 is expressed early in the onset of pancreatic cancer, already detected in the pancreatic intraepithelial neoplasia (PanIN) of stage I.
Oncogenesis
In in vivo model, MUC4 was shown to promote tumor progression and metastasis. On clinical sample, patients negative for MUC4 expression has a better prognosis and a longer life time.