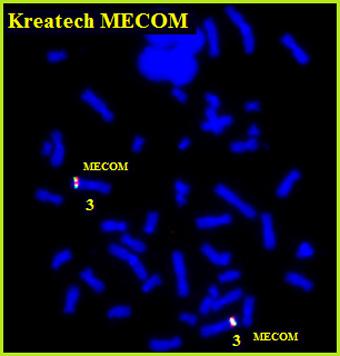 The MECOM locus in chromosome band 3q26.2 gives rise to two major mRNA and protein species, EVI1 and MDS1\/EVI1, of which the former has been characterized far more extensively. EVI1 has been implicated in the maintenance and expansion of normal hematopoietic stem cells. In addition, it plays a role as an oncogene in myeloid leukemia and in certain solid tumors, its overexpression being associated with a dismal prognosis in several of these malignancies. EVI1 exerts its biological effects mainly by regulating gene transcription, and does so by acting as a sequence specific transcription factor, by modulating the activity of other sequence specific transcription factors, and by regulating promoter CpG island methylation.

The human EVI1 gene spans approximately 65 kb of genomic DNA. 14 of its 16 exons are coding (Fig. 1A). Transcription can initiate from alternative exons 1a, 1b, 1c, 1d, or 3L (Fig. 1B), and several alternative splice variants of the EVI1 mRNA have been described (Delta324, -Rp9, Delta105; Fig. 1A).
The human MDS1 gene consists of 4 exons spread over a genomic region of more than 500 kb. MDS1 exon 4 is located less than 2 kb upstream of EVI1 exon1a. MDS1 can also be expressed on its own. The MDS1/EVI1 mRNA presumably results from splicing of the second exon of MDS1 to the second exon of EVI1 (Fig. 1B).

Exon 3 of the human EVI1 gene contains two closely spaced ATG codons, either of which may serve as the translation initiation site. Depending on which ATG is used, proteins of 1051 or 1041 amino acids will be formed. EVI1 contains two domains of seven and three zinc finger motifs, respectively, a repression domain between the two sets of zinc fingers, and an acidic domain at its C-terminus. It is a 145 kDa protein that is capable of binding to DNA in a sequence specific manner, and that interacts with transcriptional coactivators and corepressors as well as other sequence specific transcription factors. DNA binding and transcriptional regulation by EVI1 are influenced by posttranslational modifications like phosphorylation, acetylation, and sumoylation (Chakraborty et al, 2001; Shimahara et al, 2010; Bard-Chapeau et al, 2013; Singh et al, 2013; White et al, 2013).
Predicted translation of MDS1-EVI1 adds 188 amino acids to the N-terminus of EVI1. 63 of these additional amino acids are encoded by exon 2 and beginning of exon 3 of EVI1, and the remaining 125 from the MDS1 gene. MDS1-EVI1 contains a PR domain, which is about 40% homologous to the N-terminus of the retinoblastoma-binding protein, RIZ, and the PRDI-BF1 transcription factor. Some biological functions of MDS1/EVI1 were reported to be different from, or even antagonistic to, those of EVI1, while in other cases, EVI1 and MDS1/EVI1 acted in a similar manner. MDS1/EVI1 (PRDM3) has H3K9me1 methyltransferase activity and a role in maintaining heterochromatin integrity (Pinheiro et al, 2012).

Among human tissues/organs, the EVI1 mRNA is expressed abundantly in kidney, lung, pancreas, stomach, ovaries, uterus, and prostate, to a lesser extent in the small intestine, colon, thymus, spleen, heart, brain, testis, and placenta, and at very low levels in skeletal muscle and bone marrow. The pattern of expression of MDS1-EVI1 is very similar to that of EVI1.
In the adult mouse, the Evi1 mRNA is expressed, at varying levels, in the kidney, lung, stomach, ovary, uterus, intestine, thymus, spleen, heart, brain, and liver. In the mouse embryo, Evi1 mRNA levels are high in the urinary system and Mullerian ducts, the lung, the heart, and the emerging limb buds.
Similar Evi1 expression patterns were also observed in Xenopus, chicken, and zebrafish.
In human and murine hematopoiesis, EVI1 mRNA levels are high in the most immature cell populations and decline in the course of differentiation (Kataoka et al, 2011; Bindels et al, 2012; Steinleitner et al, 2012).
EVI1 expression is regulated by RUNX1 and ELK1, by retinoic acid via RAR/RXR, and by certain MLL fusion proteins (Bingemann et al, 2009; Arai et al, 2011; Maicas et al, 2013).

Nuclear; in part in speckles.

EVI1 orthologs are present in many species. EVI1 proteins from other mammals share more than 90% amino acid sequence identity with the human protein, and Xenopus EVI1 is 77% identical to its human counterpart. MDS1-EVI1 shares an overall homology with the C. elegans Egl 43 protein that includes the PR domain at the N-terminus and the two zinc-finger domains. An MDS1/EVI1 ortholog, hamlet, is also present in Drosophila.

Entity name
t(3;3)(q21;q26) or inv(3)(q21q26)
Note
3q21q26 syndrome. Chromosomal rearrangements located either 5 or 3 of the EVI1 gene can activate its transcription in haematopoietic cells. t(3;3)(q21;q26) breakpoints are often located 5 of EVI1, and inv(3)(q21q26) breakpoints 3 of it. In either case, transcription of EVI1 is activated by the distal enhancer of the GATA2 gene that is located in 3q21 (Gröschel et al, 2014; Yamazaki et al, 2014).
Disease
Acute Myelogenous Leukemia (AML), Myelodysplastic Syndrome (MDS), and Chronic Myelogenous Leukemia (CML).
Prognosis
Patients with EVI1 rearrangements have elevated platelet counts, marked hyperplasia with dysplasia of megakaryocytes, and a poor prognosis.
Cytogenetics
Rearrangements at 3q26 may occur as a sole anomaly, but are often associated with monosomy 7 or deletion of the long arm of chromosome 7, and, less frequently, deletion in chromosome 5. 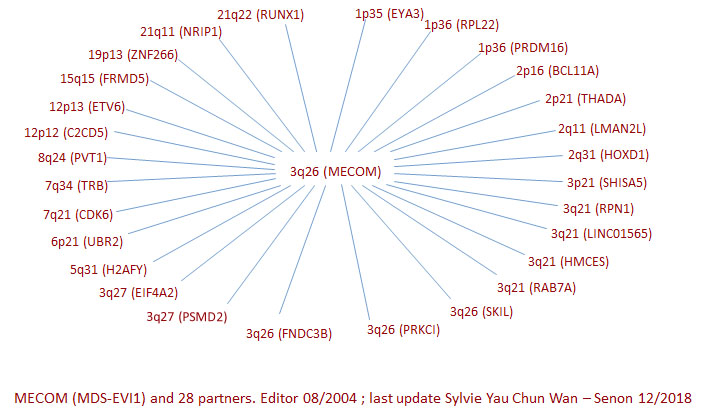