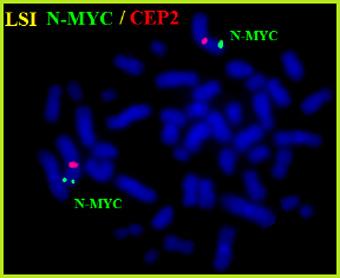 Review the structure, function, and role of CMYC gene in tumorigenesis

CMYC is composed of three exons spanning over 4 kb with the second and third exons encoding most MYC protein. These two exons have at least 70% sequence homology among species. However, exon1 is untranslated whose sequence is not as well conserved through evolution. The exon1 has been postulated to play a role in translational control and mRNA stability. There are four MYC transcriptional promoters. In normal cells, promoter P2 contributes to approximately 75% of total MYC transcripts while P1 accounts for most the remaining 25% transcripts (Dang CV 2012).

MYC mRNA contains an IRES (internal ribosome entry site) that allows the RNA to be translated into protein when 5 cap-dependent translation is inhibited, such as during viral infection.

located predominantly in the nucleus.
The myc protein contains an unstructured N-terminal transcriptional regulatory domain followed by a nuclear localization signal and a C-terminal region with a basic DNA-binding domain tied to a helix-loop-helix-leucine zipper (bHLHZip) dimerization motif. The bHLHzip motif of MYC dimerizes with the MAX, which is a prerequisite for specific binding to DNA at E-box sequences (5-CA(C/T)G(T/C)G-3) (Dang 2012). Upon DNA binding the MYC/MAX heterodimer recruits co-factors, which mediate multiple effects of MYC on gene expression in a context-dependent manner. This dimerization process is essential for induction of cell cycle progression, apoptosis, and transformation suggesting that MYC exerts its oncogenic effects by transactivation of target genes via E-boxes (Amati B, Land H, 1994; Grandori C et al 2000). The coding exons of MYC encode for the N-terminal region which has a transcriptional regulatory domain, a region that contains conserved MYC Boxes I and II, followed by MYC Box III and IV, and a nuclear targeting sequence. The N-terminal region will bind with co-activator complexes, making MYC acts as the transcription or repression factor (Cowling et al 2006).
In normal cells, MYC is tightly regulated by mitotic and developmental signals, and in turn, it regulates the expression of downstream target genes. Both MYC mRNA and protein have very short half-lives in normal cells (20-30 minutes each). Without appropriate positive regulatory signals, MYC protein levels are low and insufficient to promote cellular proliferation. In addition, MYC protein is rapidly degraded by the ubiquitin-linked proteasome machinery. The short-life and instability of MYC protein and mRNA together would seem to be an effective safeguard mechanism of MYC regulation (Herrick and Ross et al, 1994). However, these controls are lost in cancer cells, resulting in aberrantly high levels of MYC protein. In its physiological role, MYC is broadly expressed during embryogenesis and in tissue with high proliferative capacity such as skin epidermis and gut. Its expression strongly correlates with cell proliferation.

Top note
MYC Deregulation
The expression of MYC is deregulated in cancer by several different mechanisms, including chromosomal translocations, amplifications, point mutations, epigenetic reprogramming, enhanced translation and increased protein stability. In most cases these alterations lead to a constitutive expression of intact MYC protein, which is normally only expressed during certain phases of the cell cycle. In Burkitt lymphoma (BL), the MYC oncogene is activated through a reciprocal t(8;14) or its variant which juxtaposes MYC/8q24 to enhancer of the immunoglobulin (Ig) heavy Chain (IGH) locus on chromosome 14q32 or the kappa or lambda light chain locus on chromosome 2 or 22. There are three main translocation breakpoints in MYC; class I breakpoints are within the exon 1 and first intron of MYC; class II breakpoints are located at the 5 end of the MYC, and usually within a few kilobases of exon 1; and the class III breakpoints are distant from MYC itself, and can be more than 100 kb away. Endemic BL typically shows class II translocation breakpoints in MYC while the sporadic BL often exhibits class I breakpoints of MYC. The t(8;14) or its variant is considered as an initiative event in BL. The MYC/8q24 translocations may also occur as secondary events in non-BL lymphomas such as diffuse large B-cell lymphoma, follicular lymphoma, mantle cell lymphoma, and multiple myeloma (Cai et al, 2015; Nguyen L, et al 2017). Secondary MYC translocation is associated with a complex karyotype and most often confer aggressive clinical behavior and poor outcome. Recently, B-cell large cell lymphoma with MYC and BCL2 or/and BCL6 rearrangements so called double hit or triple hit lymphoma are recognized by the 2016 revision of WHO as a subset of a very aggressive lymphoma (Petrich 2014). >
Amplification of MYC gene has been shown in both hematopoietic and non-hematopoietic tumors, including lung, breast, colon, and prostate cancers. Insertional mutagenesis is seen in retrovirus-induced tumors, such as avian leucosis virus (ALV)-induced hematopoietic tumors, in which the proviral enhancer is integrated upstream of the MYC gene and leads to its overexpression. MYC overexpression may also occur because of post-translational modifications. MYC protein overexpression as a result of point mutations in N-terminal domain is also frequent. The most recurrently mutated residue is Thr-58, found in lymphoma. Normally, the phosphorylation of Thr-58 can control MYC degradation and mutation causing increase of MYC protein half-life in lymphoma (Cai et al 2017). Detection of MYC rearrangement is important in the diagnosis of BL and as a prognostic marker in other aggressive B-cell lymphomas. There are several techniques to detect MYC deregulation including conventional cytogenetics, fluorescence in situ hybridization (FISH), and immunohistochemistry. In clinical laboratory, FISH is being most frequently used approach (Figure 2) >
MYC as therapeutic target
MYC is documented to be involved broadly in many cancers, in which its expression is estimated to be elevated or deregulated in up to 70% of human cancers. Overexpression of MYC protein is not only to drive tumor initiation and progression, but is also essential for tumor maintenance. Furthermore, growth arrest, apoptosis and differentiation occur upon reduction in MYC levels. These features make MYC molecule a highly attractive target for cancer therapy. However, the lack of deep pocket in the structure of MYC protein makes the traditionally small molecule inhibitors are not feasible. For this reason, other alternative strategies are proposed. One approach suggests that the disruption of the MYC/MAX binding site can be a strategy for the inactivation of MYC function in neoplastic cells. Such an approach was already applied and different small molecule inhibitors that can specifically target MYC were already successfully produced. Other approach is based on the inhibition of MYC/MAX dimers binding to E-boxes in the promoters of different MYC target genes. Other groups have focused on transcriptional inhibition of the MYC gene. Preliminary evidence from experiments using MYC antisense oligonucleotides has been encouraging, but has not translated into effective clinical treatments ( Koh 2016). 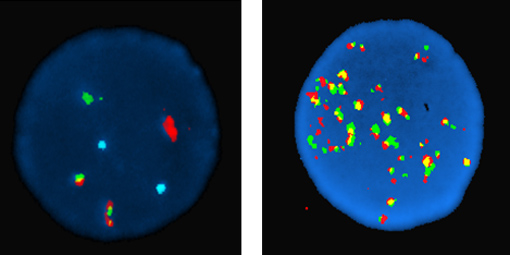 FISH using MYC/IGH/CEP8 triple color dual fusion DNA probe set, showing dual fusion pattern, consistent with t(8;14)(q24;q32) [left] in a case with Burkitt lymphoma; MYC amplification in acute myeloid leukemia [right] - Anwar N. Mohamed.
Note
MYC gene encodes a multifunctional, nuclear phosphoprotein that controls a variety of cellular functions, including cell cycle, cell growth, apoptosis, cellular metabolism and biosynthesis, adhesion, and mitochondrial biogenesis. MYC has been shown to be an essential global transcription factor capable of either promoting or repressing the expression of a massive array of genes, accounting for >15% of the human genome, commonly referred to as the "MYC signature" (Knoepfler 2007). MYC is among the most frequently affected gene in human cancers, overexpressed in most human cancers and contributes to the cause of at least 40% of tumors. Dysregulation of MYC expression results through various types of genetic alterations leading to a constitutive activity of MYC in various cancers (Dang et al, 2006). 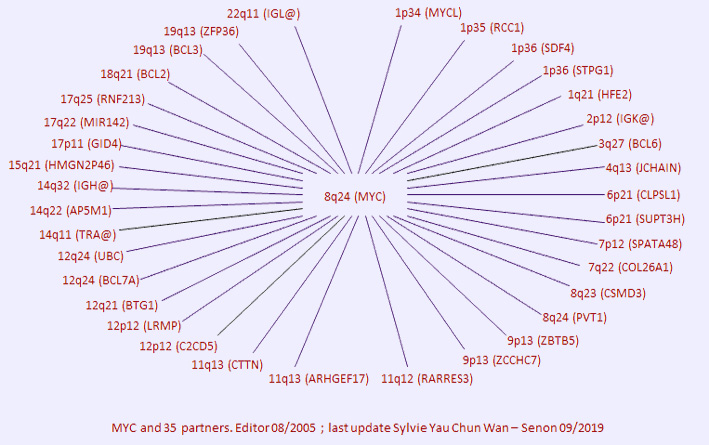