The gene for human cathepsin B is located on chromosome 8p22 and it comprises 12 exons. The transcript length is 1017 bps which are translated to 339 residues preproenzyme. Cathepsin B mRNA consists of several variants produced by alternative exon splicing. Most variations involve the 5- and 3-UTR. Cathepsin B mRNAs lacking exon 2 are predominant in human tumours. In addition, human breast and colon carcinomas and human melanoma contain a cathepsin B transcript that is also missing exon 3 encoding the signal peptide and 7 residues of the activation propeptide. 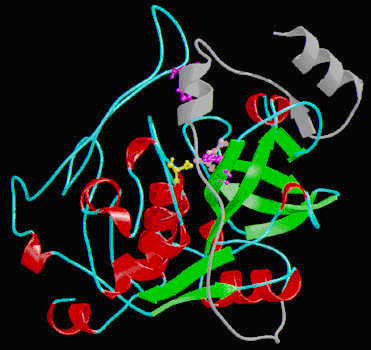 Cathepsin B belongs to the superfamily of papain-like cysteine proteases. It is synthesized as a preproenzyme of 339 amino acid residues with a calculated Mr of 37 822 Da. The presence of a signal sequence and N-glycosylation sites shows that cathepsin B is targeted to the endosomal/lysosomal compartment via the mannose-6-phosphate receptor pathway.
Under certain pathological conditions, cathepsin B is translocated to the peripheral cytoplasmic and plasma membrane region or secreted from cells. Processing to the mature enzyme form occurs in the acidic environment of the trans-Golgi and the lysosome. Procathepsin B can be activated by cathepsin D, elastase and cathepsins G, uPA/PLAU or tPA./PLAT Activation occurs by cleaving and dissociation of 62 residue proregion. The final proteolytic event is the cleavage between residues 47 and 50 to yield a two-chain form of the enzyme with the excision of a dipeptide. Access of substrate into the active site of cathepsin B is controlled by an 18-residue-long insertion (Pro 107 Asp 124), termed the occluding loop which provides two His residues to bind the carboxylic group of the C-terminus of the substrate. This explains the preferred carboxypeptidase activity of the enzyme.
However, cathepsin B can also act as an endopeptidase since the occluding loop is flexible and can move from the active site cleft when endopeptidase substrate binds to the enzyme. For colorimetric and fluorimetric assay of cathepsin B peptidyl-NHPhNO2 and  NHMec substrates are most commonly used. When the selectivity for cathepsin B over other lysosomal cysteine peptidases such as cathepsin H, cathepsin L and cathepsin S is required, Z-Arg-Arg+ NHPhNO2 or Z-Arg-Arg+NHMec should be used.
Cathepsin B is inhibited by a2-macroglobulin, the cystatin family of inhibitors of papain-like cysteine peptidases and by the equistatin family. The displacement of the occluding loop is required for the binding of cystatin C to the active-site cleft. Most of the natural cysteine protease inhibitors are therefore much less effective against cathepsin B than other members of the papain family. Cathepsin B is susceptible to the various classes of irreversible inhibitors that have been developed for the papain family. Selectivity has been achieved through the synthesis of E-64 derivatives CA-074, CA-030 and isobutyl-epoxysuccinyl-Leu-Pro.

Based on the structure of the mouse and human promoter regions, cathepsin B is classified as a housekeeping gene. Although this implies that the expression of the gene is constitutive, increases in the amounts of mRNA for cathepsin B have been reported in many human tumours. At the gene level, the altered expression results from gene amplification, elevated transcription, use of alternative promoters and alternative splicing. These molecular changes lead to increased cathepsin B protein levels and in turn redistribution, secretion and increased activity. Over-expression of cathepsin B has been reported in several human tumours including tumours of brain, colon, prostate and thyroid.

Cathepsin B asts as a lysosomal cysteine protease in normal cells and tissues. In malignant tumours and premalignant lesions, the expression of cathepsin B is highly up-regulated and the enzyme is secreted and becomes associated with the cell surface. Secretion of procathepsin B occurs principally as a result of increased expression, whereas secretion of active cathepsin B seems to be facilitated by lysosomal exocytosis or extracellular processing by surface activators. Cathepsin B is localized to caveolae on the tumour surface, where binding to the annexin II heterotetramer occurs. Activation of cathepsin B on the cell surface leads to the regulation of downstream proteolytic cascade(s). A truncated form of cathepsin B lacking the signal peptide and part of the propeptide, and encoded by the construct missing exons 2 and 3, was neither found in the Golgi apparatus nor in lysosomal vesicles, but rather in the cytoplasm as patches associated with membranous and short fibrillar elements.

In the lysosomes, cathepsin B is involved in the turnover of proteins and plays various roles in maintaining the normal metabolism of cells. Cathepsin B protein and activity levels have been found to be higher in many human tumours including tumours of breast, cervix and ovary, colon, stomach, glioma, lung and thyroid. The redistribution of cathepsin B to the cell surface in cancer cells occurs coincidently with degradation of the underlying extracellular matrix (ECM). Cathepsin B can affect ECM directly causing its proteolytic degradation or indirectly via activation or amplification of other ECM-degrading proteases. The endopeptidase activity of cathepsin B should be important in direct extra- or intra-cellular remodelling of ECM, since it is capable of degrading ECM proteins laminin, fibronectin, and collagen IV, facilitating tumour cell invasion and metastasis. Digestion of fibronectin results in exposure of the CS-1 sequence, which is recognized by the integrin receptor a4β1, linking cathepsin B to cellular signal transduction events. Cathepsin B indirectly enhances proteolysis by activating the urokinase-type pro-plasminogen which can subsequently activate the plasmin-metalloproteinases proteolytic pathway.
Moreover, cathepsin B may change the balance between metalloproteinases (MMP) and their inhibitors and directly activates some of the MMPs - interstitial procollagenase (proMMPs-3) and prostromelysin-1 (proMMPs-2), and cleaves and inactivates some of the MMP inhibitors TIMP-1 and TIMP-2. In such a way, cathepsin B assists tumour cells in their detachment from ECMs and metastasis. Moreover, during proteolytic breakdown of ECMs, some ECM-bound growth factors such as bFGF, EGF, TGF-β, IGF-I and VEGF may be liberated and become bioavailable for growth modulation of receptor-partner expressing tumour and stroma cells.

Cathepsin B is encoded by a single gene in humans and other mammals and it exhibit a high degree of sequence homology to other cysteine proteinases of the papain superfamily. In contrast, cathepsin B-like cysteine protease genes occur as large multigene families in a wide range of parasitic helminths and free-living nematodes. Several cathepsin B-like genes were shown to be expressed in the intestine of the parasitic worm Haemonchus contortus or in the free-living nematode Caenorhabditis elegans. No function for any of the cathepsin B-like cysteine protease, has been resolved but it is believed that they are involved in induction of protective immunity.

not yet reported for Homo sapiens.

not yet reported for Homo sapiens.

Entity name
Invasive cancers
Disease
Over-expression of cathepsin B mRNA has been reported in several human tumours including tumours of brain, colon, prostate and thyroid. However, increased expression of cathepsin B, in premalignant lesions, suggests that this enzyme may play a role in the transformation of pre-malignant lesions to malignant tumours. Moreover, it has been found that cathepsin B expression often increases specifically at the invasive edge of tumour cells. Although, a few studies indicate a correlation between cathepsin B mRNA over-expression and tumour invasion, numerous studies have been focused on cathepsin B expression at the level of protein and activity. Cathepsin B protein and activity levels have been found to be higher in many human tumours including tumours of breast, cervix and ovary, colon, stomach, bladder, glioma, lung, prostate and thyroid.
Prognosis
Cathepsin B was shown to participate in processes of tumour growth, vascularisation, invasion and metastasis. Its level in tumour tissue extracts can provide useful clinical information to predict disease-free and overall survival in breast, prostate, lung, colorectal and other cancer patients. Cathepsin B expression correlated with the invasiveness, especially in malignant breast and prostate tumours. In melanoma and colorectal cancer patients high serum levels of cathepsins B correlated with shorter survival. It was found that both cysteine cathepsins and their endogenous protein inhibitors stefins and cystatin C can also predict prognosis when measured extracellularly. However, the cathepsin B/cystatin C complex was found to be less abundant in sera of patients with malignant tumours than in those with benign diseases or in healthy controls, suggesting an imbalance between the enzyme and its inhibitor in cancer patients.
Oncogenesis
Cathepsin B can degrade components of the extracellular matrix (laminin, fibronectin and collagen IV) and intact basement membrane in vitro. In vivo studies have found that there is an inverse correlation between cathepsin B staining and basement membrane (type IV collagen or laminin) staining in bladder, gastric, lung and colon carcinomas. This would be consistent with a functional role for cathepsin B in degrading these extracellular matrix components in vivo.
Once activated, cathepsin B may activate pro-uPA, which then in turn can convert plasminogen to plasmin. Plasmin is capable of degrading several components of the extracellular matrix may activate MMPs such as interstitial collagenase (MMP-1), stromelysin-1 (MMP-3), gelatinase B (MMP-9), metalloelastase (MMP-12), and collagenase-3 (MMP-13). These MMPs can degrade many different components of the extracellular matrix and can activate other MMPs. Cathepsin B, in addition to indirectly activating MMPs via the plaminogen activator/plasmin cascade, may also directly activate MMPs, e.g., interstitial collagenase and stromelysin-1. In vitro assays, however, do not replicate the complex tumour environment and thus we are not sure if these interactions between proteases actually occur in vivo.
Entity name
Neurodegenerative diseases
Disease
The regulated secretory pathway of neurons is the major source of toxic beta-amyloid peptides that accumulates in Alzheimers disease. Extracellular beta-amyloid peptides secreted from that pathway is generated by beta-secretase processing of amyloid precursor protein. Previously, cysteine protease activity was demonstrated as the major beta-secretase activity in regulated secretory vesicles of neuronal chromaffin cells. The representative cysteine protease activity in these secretory vesicles was identified as cathepsin B. These results demonstrate a newly identified role for cathepsin B in neurosecretory vesicles in the production of biologically active peptides. Inhibitors of cathepsin B may be considered as therapeutic agents to reduce toxic beta-amyloid peptides in Alzheimers disease.
Entity name
Cardiovascular diseases
Disease
Cathepsin cysteine proteases have been shown to play a role in several cardiovascular diseases, including restenosis and neointima formation, aneurysm formation, and atherosclerosis. Cathepsin B is mainly expressed in macrophages, but also in smooth muscle cells and human umbilical venous endothelial cells. Its mRNA and protein levels were found to be increased in atherosclerotic lesions of apoE-deficient mice, and cathepsin B immunoreactivity was highest in areas next to the lumen and in macrophages. Relocation of cathepsin B from the lysosome into the cytosol, where it may act as cleavage enzymes in apoptosis, may eventually contribute to the formation of the necrotic core and can be considered an atherosclerosis-stimulating role. On the other hand, inhibition of cathepsin B reduced lysosomal degradation of modified LDL, thereby inducing foam cell formation, which can be regarded as an atherosclerosis-protective role for cathepsin B.